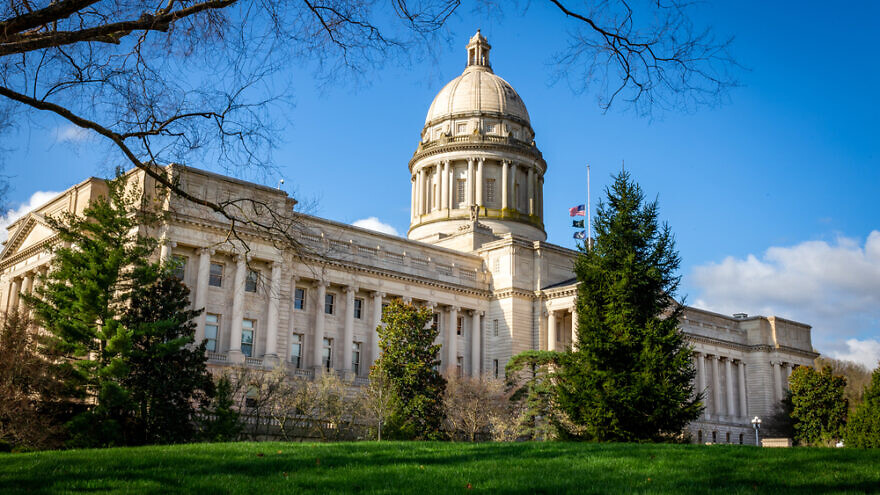 (March 4, 2022 / JNS) A Republican lawmaker in Kentucky has issued an apology for talking about the sexual habits of Jewish women and the Holocaust during a legislative debate on an abortion bill in the House of Representatives.

Rep. Danny Bentley, who is also a pharmacist, said, “I meant absolutely no harm in my comments today and sincerely apologize for any they caused” in a statement provided Wednesday night to The Courier Journal. He also said he stands “with the Jewish community against hatred.”

Earlier in the day, as the House debated a bill about regulating the dispense of abortion pills, Bentley made the comments about Jewish women while referring an amendment that suggested exempting them from the abortion restrictions in the bill.

He also falsely claimed that RU-486, also known as mifepristone, one of two pills taken to end pregnancies, was developed during World War II and was called Zyklon B, which is the poisonous gas used by Nazis to kill Jews in the Holocaust. He added that “the person who developed (it) was a Jew.”

“Did you know that a Jewish woman has less cancer of the cervix than any other race in this country or this world?” Bentley asked. “And why is that? Because the Jewish women only have one sex partner… They don’t have multiple sex partners. To say that the Jewish people approve of this drug now is wrong.”

Talking about the company that made RU-486 and again falsely tying the drug to the Holocaust, Bentley then asked: “Why would they do it? Because they’re making money on it.”

The person who developed RU-486 was in fact Jewish, but the drug was created in the 1980s far after World War II ended.

Jewish groups including the American Jewish Committee, the Jewish Community Relations Council of the Jewish Federation of Louisville and the National Council of Jewish Women’s Louisville Section condemned Bentley’s remarks and called it “a bizarre, anti-Semitic rant,” The Courier Journal reported.

Bentley further said in his apology, “My intention was to speak as a pharmacist to the history of RU-486 and respond to a proposed amendment. I clearly should have been more sensitive with my comments.”