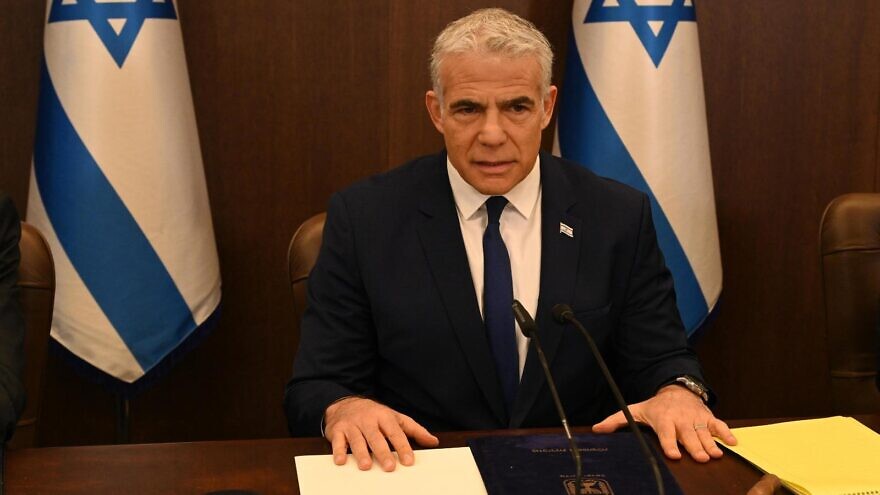 (December 5, 2022 / JNS) Outgoing Israeli Prime Minister Yair Lapid on Monday shot back at his prospective successor’s accusation that his call on municipalities to flout the incoming government’s directives amount to sedition.

“Prime Minister-designate Benjamin] Netanyahu said this week that the fact that I am calling on the heads of the authorities not to cooperate with [Noam Party leader Avi] Maoz is sedition. There is no limit to this man’s shamelessness,” Lapid said at a meeting of his Yesh Atid Party.

“If you think what I’ve been saying the last few days is rebellious, I have news for you; You ain’t seen nothing yet,” he added.

Netanyahu on Friday denounced Lapid for “attempting to incite rebellion among army officers and mayors against the elected government under our leadership.”

Netanyahu’s comments came in response to Lapid’s call on  municipalities “not to cooperate with the unit for external programs and promotion of partnerships in the Ministry of Education, as long as it is under the control of MK [Avi] Maoz.”

On Nov. 27, Netanyahu assigned Maoz to head that department to be established under the next government.

More than 50 mayors and local authorities addressed an open letter to Netanyahu in which they said they wouldn’t take part in curricula “that contradict the humanistic values, which appear in the State Education Law.”

The letter was an initiative of the Aguda—The Association for LGBTQ Equality in Israel.

Maoz responded Monday to criticism of his appointment at the ministry of education, labeling it “an attempt to prevent the prime minister-designate from forming the sole legitimate elected government after the election.

“In recent days, a wild public campaign has been carried out by the left with the authorization of Yair Lapid and the media,” he said, adding: “It’s a campaign of a minority which lost in the election against the national majority that had its emphatic say at the ballot box. This campaign is no less than incitement to rebellion.

“It’s a struggle that starts with Yair Lapid, passes through [outgoing Education Minister Yifat] Shasha-Biton and ends with the media—all of them conducting a raging war against democracy and the majority of the nation that voted to oust them from their positions,” Maoz said.