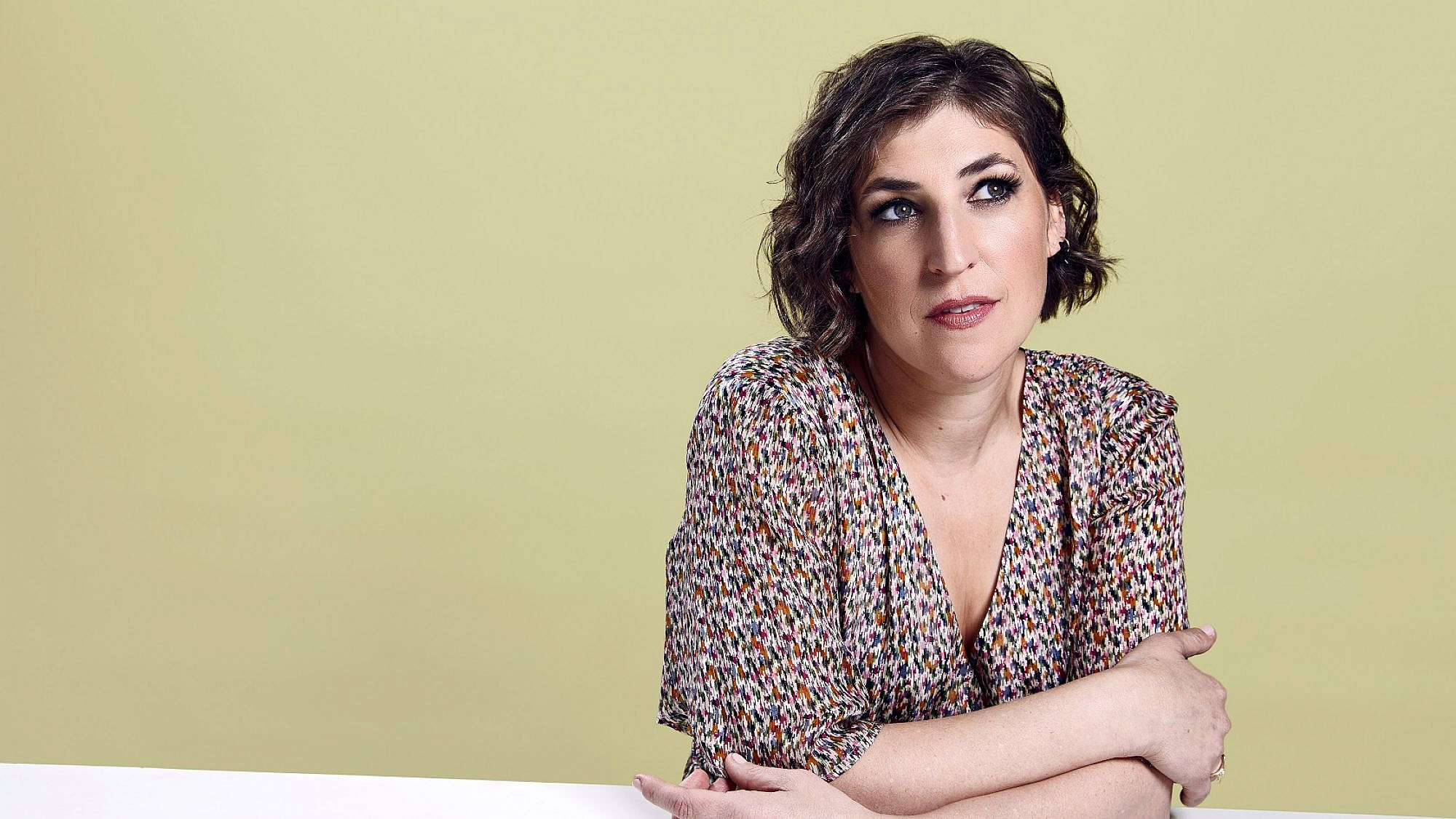 (February 4, 2021 / JNS) From her role as the little girl with the big voice in the hit 1988 film “Beaches” to her star turns on TV shows “Blossom” and “The Big Bang Theory,” Mayim Bialik has brought joy to millions with her comedic and musical gifts.

Now the California native, who also holds a Ph.D. in neuroscience (that’s Dr. Bialik, to you!), is bringing her classic Jewish-American looks and nerdy charm to the role of Kat on “Call Me Kat,” her new TV show airing Thursday nights on Fox at 9 p.m. Chronicling the adventures of a single Jewish woman who quits her job as a math professor to open a “Cat Café,” the show, which started on Jan. 3, features a cast of lovable oddballs.

Between filming, podcasting and raising two sons (ages 12 and 15), the 45-year-old made time to share her thoughts on family, the single life and laughter in times of stress.

Responses have been edited for brevity and clarity.

Q: I watched the first three episodes of “Call Me Kat” and enjoyed them. Has the coronavirus pandemic been an especially hard time for singles, and is “Call Me Kat” good medicine?

A: I think this past year has been very difficult, and a show like “Call Me Kat” can provide comfort and humor for people who are not coupled. We are trying to be a warm chocolate-chip cookie of a show.

Q: Are you single?

A: I am in a relationship. I got divorced eight years ago, so I’ve been single plenty in my life. I promise you, I know what it’s like.

Q: I understand you and your boyfriend started a podcast about mental health, “Mayim Bialik’s Breakdown.” Tell me about that?

A: My partner Jonathan Cohen and I work on it together; we are creative and writing partners. One thing we talk about on the podcast is loneliness for people struggling with that. He is a writer and I’m a neuroscientist, so I bring the science piece.

Q: Any particular advice for singles to cope right now?

A: I’m a huge advocate and believer in natural remedies, as well as in [traditional] therapy—that what you eat as well as sleep and exercise, are important. Also, that a lot of mental health is feeling connected and seen. I think the arts can help with that. 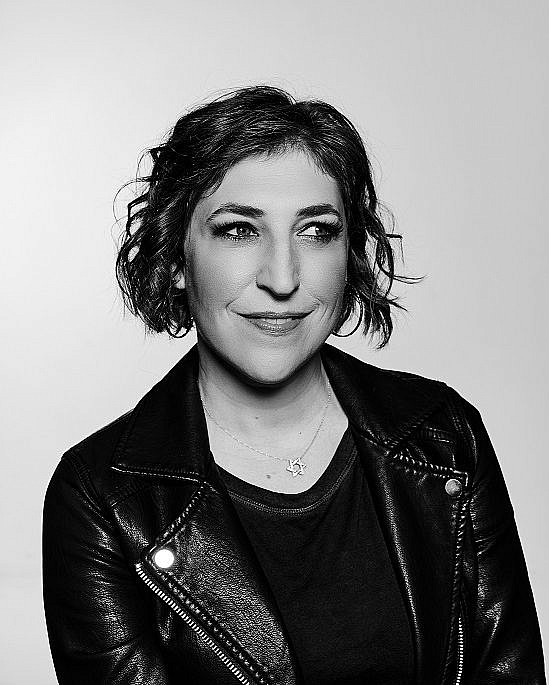 From her role as the little girl with the big voice in the 1988 film “Beaches” to her star turns on TV shows “Blossom” and “The Big Bang Theory,” Mayim Bialik has brought joy to millions with her comedic and musical gifts. Credit: Storm Santos.

A: I’ve heard that from [watching] the show I acted in as a teenager, “Blossom,” some girls who were more nerdy or awkward felt seen. Most women don’t feel they are the Hollywood ideal, most may be closer to the nerdy side, so yes, hopefully seeing girls and women [in media] we can relate to is helpful to people. Getting to play a real woman is very empowering. For many [acting] jobs you are told to lose 15 pounds on your body that may be there for comfort and warmth. I’m grateful I get to be myself on TV.

Q: I liked the episode where your character, Kat, gets invited to her married friend’s renewal-of-vows ceremony, but she’s not invited to bring a plus one. Does society still give couples preferential treatment over singles, and is that a theme on the show?

A: Yes, I think our show is about empowerment for singles. Society’s changing, and we want to reflect that. But there’s something for everyone, and I think our writers have done a good job [showing that] no one has the perfect life, whether coupled or single.

Q: Is your character, Kat, supposed to be Jewish? And will that emerge as a theme?

A: Kat’s last name is Silver; her father was supposed to be Jewish. There’s an episode where Kat and her mom are post-funeral, and the mirror is covered. As of now, the [character’s] Jewish identity hasn’t been a major feature, but going forward, we’ll see.

Q: Is your mother on the show (played by Swoosie Kurtz,) anything like your real-life Mom? Does she noodge you to get married, for instance?

A: [Laughs]. I think my mom would vehemently deny it, but it’s most moms’ wish their daughter would be married. My mom has more humor and self-awareness than that character, but there’s a lot of my mom’s flair in her.

Q: Some of the great classic sitcoms featured single women: “Mary Tyler Moore” and “Laverne and Shirley” come to mind. Do you see yourself in their tradition?

A: Cindy Williams and Penny Marshall are some of the comediennes I grew up watching. Like Laverne and Shirley, Kat is a quirky female who can be sloppy, klutzy and awkward, and at times even vulgar, getting to take center stage. Usually, that character is the sidekick, but here she is the lead. Yes, to Cindy and Penny and Mary Tyler Moore! It is such praise, and such an honor, to be in any way compared to them and to carry their torch.

Q: Do you have a favorite scene in the early episodes of “Call Me Kat?” I really liked the bar/cabaret scene with Kat and her crush—I’m forgetting his character’s name—the cute tall guy? It was great to hear you sing again!

A: I liked that scene also. I get to sing on the show, and there is some dancing coming up. If my mom would’ve designed a show for me when I was 11, it would’ve been “Call Me Kat” because they took all I can do best and let me do it.

Q: I understand you’re also a producer on the show? How did that come together?

A: Our show is based on a BBC show called “Miranda.” Jim Parsons [who played Bialik’s character Amy Farrah Fowler’s husband Sheldon Cooper on “The Big Bang Theory”] and his company, who have the rights to the BBC series, asked me if I’d like to co-produce and star in an American version of the show.

Q: Do your sons watch the show?

A: We’re not really a TV-watching family.

A: My ex-husband watched the first episode with them, and I’m grateful to him. They hear a lot that I’m working, so it was good for them to get to see a little of what my work is about. They are 12- and 15-year-old boys, so I’m not sure they’ll be regular watchers.

Q: Have they seen you in “Beaches?” You were so adorable.

Q: Seriously? That film’s a classic.

A: They’re more into Will Ferrell and Sacha Baron Cohen.