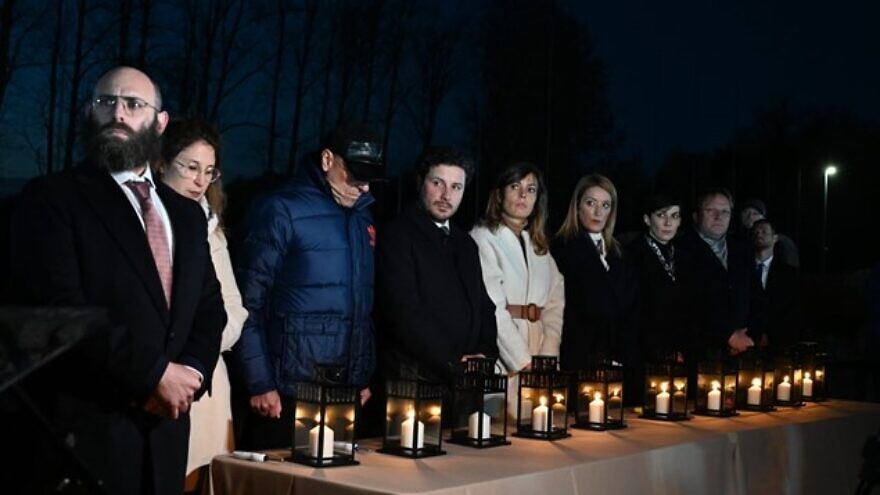 (November 10, 2022 / JNS) The European Jewish Association (EJA) on Wednesday visited Auschwitz-Birkenau to mark the 84th anniversary of Kristallnacht, or “Night of Broken Glass,” a Nazi pogrom that took place on Nov. 9-10, 1938.

“My sons were on the bus in the center of Brussels last week. One woman looked at them with hatred, shouted ‘dirty Jews’ and moved to another seat. Everybody has the duty of visiting Auschwitz,” Rabbi Menachem Margolin, president of EJA, told the audience.

Gabriel Senderowicz, president of the Jewish Community of Oporto, Portugal, whose community has been in the news for having endured persecution by “state agents,” told the Portuguese Jewish News that “this event is fundamental for debating measures to curb anti-Semitism in Europe. And as important as debating is acting.”

On Nov. 9, the Oporto Jewish and Holocaust Museums, in partnership with the EJA, marked the anniversary of Kristallnacht, also the International Day against Anti-Semitism, with an exhibit about the “Night of Broken Glass.”

The museum was full of young people, “who have the obligation to know this chapter of history,” Senderowicz said.

Museum director Michael Rothwell, whose family was victimized in Kristallnacht, (every window in his grandfather’s shoe shop was broken), presented the exhibit to the children.

The museum also presented a guided tour of the Modern Anti-Semitism Room, showing the growth of the phenomenon in Portugal between 2015 and 2022.

The Oporto Jewish community reportedly came under attack by opponents of the “Spanish Law,” which granted citizenship to descendents of Jews who were expelled from the Iberian Peninsula in the 15th century.