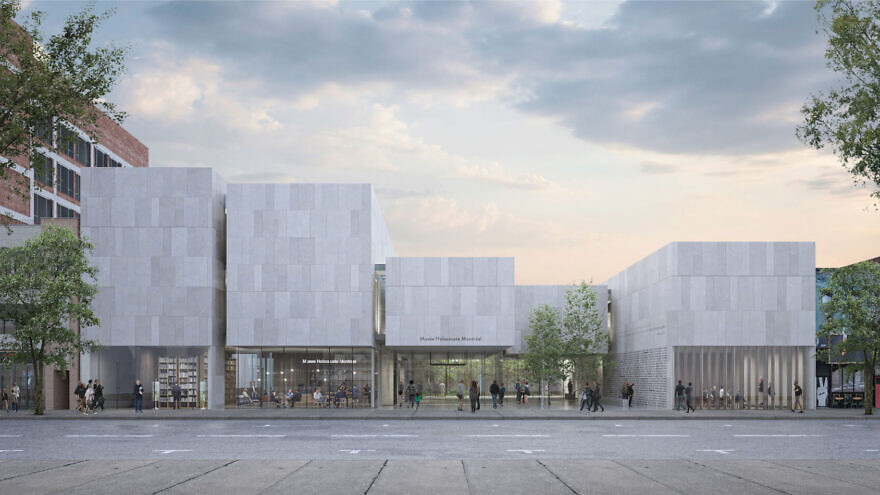 The new home of the Montreal Holocaust Museum, seen in this architect's rendering, is slated to open in two years. Credit: Courtesy of KPMB Architects.
Spread the word.
Help JNS grow!
Share now:

(September 13, 2022 / JNS) The Montreal Holocaust Museum (MHM) revealed on Monday the architectural designs for its new downtown premises that will open in the city’s historic Jewish quarter in September 2025.

The building, located about 4 miles away from the museum’s current location, will feature exhibition spaces, classrooms, an auditorium, a memorial garden and a survivor testimony room. The designs for the new museum were selected following an architectural competition in which 32 proposals from nine countries were reviewed by a jury.

The museum is moving from its current location in Cote-des-Neiges to Saint-Laurent Boulevard in downtown Montreal. Construction on the new facility will begin in the fall of 2023.

“We are delighted to share the designs of our new museum which will be an important space of learning, action and coming together,” said MHM executive director Daniel Amar. “The brilliant design succeeded in creating a space of powerful architecture that remains respectful and sensitive to the difficult history of the Holocaust and its human rights legacy that will be transmitted within its walls.”

The museum raised $85 million to support the $90 million construction project through its “Give Voice” fundraising campaign. It received contributions from the Department of Canadian Heritage, Quebec’s Ministry of Culture and Communications, the City of Montreal, the Azrieli Foundation and private donors.