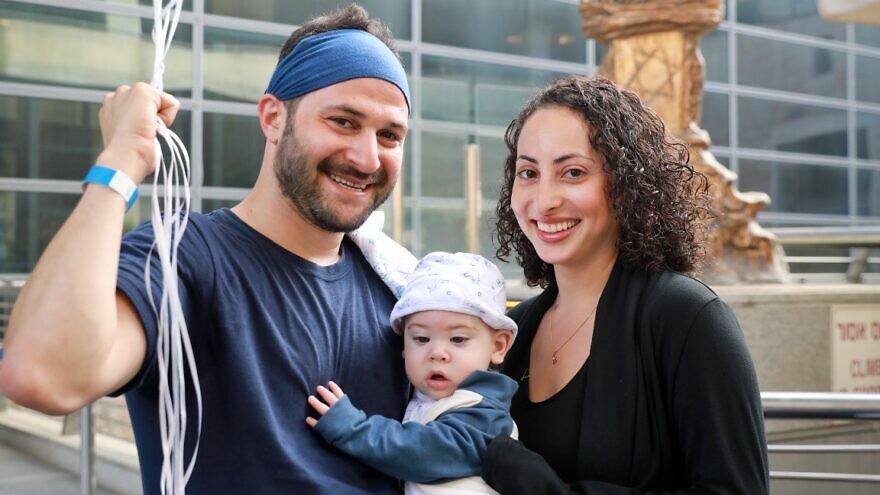 (April 27, 2022 / JNS) Nefesh B’Nefesh, in partnership with Israel’s Ministry of Aliyah and Integration, the Jewish Agency for Israel, Keren Kayemeth LeIsrael and JNF-USA, welcomed its 74,000th new immigrant on Wednesday.

Charley Smith, 34, made aliyah from Florida and reunited with his wife, Shaked, and their son, Adar, who arrived in Israel earlier this month. He landed just one week before Israel celebrates its 74th Independence Day.

Originally from Minneapolis, Charley’s connection to the Jewish state began at a young age after his parents, Michael and Shelli Smith, traveled to Israel on a young leadership mission. As a result of his parents’ influence, his passion for Judaism soared, and his roots to the country were solidified during the semester he spent at Kibbutz Tzuba in high school.

Charley met his wife while staffing a Birthright trip in 2014; Shaked was a soldier in the Israel Defense Forces who joined that same trip. The two stayed in touch, visiting each other in their respective countries for several years. In 2017, Shaked relocated to the United States, where the couple wed.

“It is incredibly special to finally be here, and we are looking forward to beginning this new chapter in our lives and growing our family here,” said Charley.

The Smiths plan to live in Kfar Saba with their two dogs, Gever and Pamela.

“As we celebrate the miraculous 74th anniversary of the establishment of the State of Israel, we are thrilled to welcome our 74,000th oleh,” said Rabbi Yehoshua Fass, co-founder and executive director of Nefesh B’Nefesh. “We are incredibly proud of this milestone and remain devoted to providing every individual who makes aliyah with the resources and support needed to best integrate into Israel society, furthering the development of our young state.”