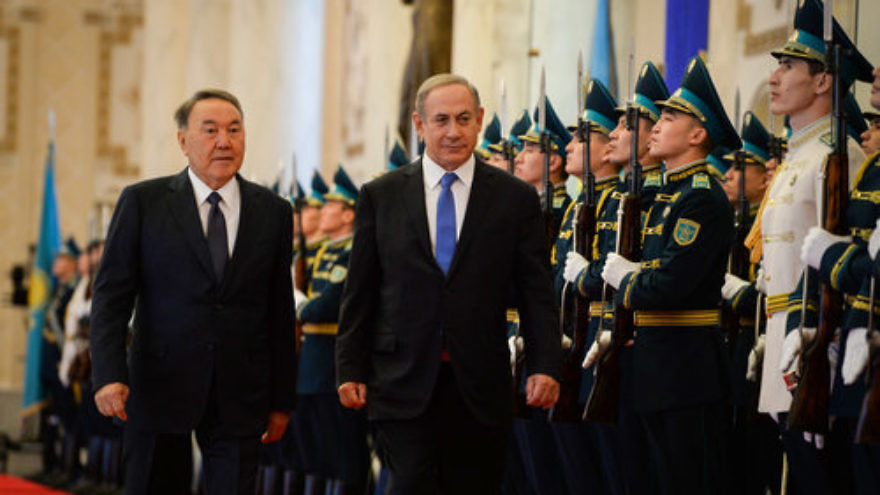 (December 15, 2016 / JNS) In hopes of offering a blueprint for ramping up constructive Israeli and Jewish relations with the Islamic world, Prime Minister Benjamin Netanyahu this week made historic visits to Azerbaijan and Kazakhstan, two Muslim-majority nations in Central Asia.

Netanyahu’s trip to the former Soviet Republics was part of an ongoing push by the Jewish state to forge closer ties with many non-traditional allies in Africa, South America and Asia. The Israeli leader visited several countries in East Africa earlier this year, and has plans to return to that continent for visits to West African nations.

While giving remarks at the Great Synagogue of Astana, Kazakhstan’s capital, Netanyahu noted that he was speaking “in Central Asia, in an Islamic country that respects Israel, that honors coexistence and tolerance, and constitutes a model of what needs to happen—and can happen—in our region as well.”

Similarly, in Azerbaijan, Netanyahu lauded Israeli-Azerbaijani ties as “something that we can show the world.”

“The world sees so much intolerance, so much darkness, and here is an example of what relations can be and should be between Muslims and Jews everywhere,” said Netanyahu.

Azerbaijani Ambassador to the U.S. Elin Suleymanov told JNS.org that Netanyahu’s visit is significant not just from the perspective of intergovernmental relations, but because of Azerbaijan’s vibrant and thriving Jewish community.

“This connection with the Jewish community is the backbone of our relations [with Israel],” Suleymanov said.

Both Azerbaijan and Kazakhstan are home to small, yet historically significant Jewish communities, numbering in the thousands following steep emigration to Israel after the fall of the Soviet Union. Azerbaijan’s so-called “Mountain Jews” have a long history dating back to ancient Persia, while Kazakhstan’s community is a mix of Ashkenazi Russian Jews and Bukharian and Mountain Jews.

Prof. Brenda Shaffer, a specialist on Central Asia and the Caucasus region who is currently a visiting professor at Georgetown University, told JNS.org that Azerbaijan has had a long history of tolerance and secularism that underlies its warm relations with Israel. Azerbaijan “gave women the right to vote before the U.S.” and has always been a “very cosmopolitan” nation, said Shaffer.

“[Azerbaijanis] have a strong secular tradition, but there are also some who are trying to change this and have threats from extremism,” she said.

Shaffer, who has lived in Azerbaijan, said that current Azerbaijani leaders and their families all speak very warmly about their personal relations with Jews, especially regarding their children’s Jewish teachers in schools.

“The Jews of Azerbaijan are very integrated into the society. They are not ‘tolerated,’ like they are in some other parts of the world—they are part of the society,” she said.

Dr. Avinoam Idan—a senior fellow with the Central Asia-Caucasus Institute & Silk Road Studies Program at Johns Hopkins University and a University of Haifa professor—told JNS.org that when he first visited Central Asia and the Caucasus region in the late 1980s, he was very impressed with the emphasis on separation of church and state.

“As someone coming from the Middle East, where religion and politics are mixed together, I was totally impressed when I came to these countries. Islam is totally separated from politics and foreign policy,” he said.

Idan explained that because the Central Asian and Caucasus countries are still very young nations—the Soviet Union fell in 1991—they do not have the legacy of anti-Israel sentiment that predominated the Islamic world during the 20th century.

“They were less exposed to the culture from the Middle Eastern [Muslim-majority] countries. They are young countries, and while they have their challenges, they don’t spend their time on the conflicts of the Islamic world,” he said.

Amb. Suleymanov said Azerbaijan not only enjoys warm relations with the world’s only Jewish state, but also forges close ties with Christians. In October, Pope Francis visited Azerbaijan and praised the country’s culture of religious tolerance.

Suleymanov is also no stranger to Israel. He visited the Jewish state in 2015 as part of a program sponsored by the American Jewish Committee.

“One thing I noticed that is not very well-understood outside of Israel is how diverse the Israeli public is—how many ethnic groups, religions and cultures you have there,” said Suleymanov. “People don’t often understand that and think Israel is a homogenous country.”

Israel’s warm relationships with Azerbaijan and Kazakhstan stand in stark contrast to Iran, whose presence hovers over the Jewish state’s ties in the region.

Azerbaijan has particularly complicated relations with Iran, which borders Azerbaijan to the south. Iran has supported Azerbaijan’s top enemy, Armenia, during the Armenian-Azerbaijani conflict over the disputed territory of Nagorno-Karabakh. Further, Iran is concerned that Azerbaijan serves as a base for Israel’s intelligence gathering on Iranian activities.

Iran is home to a sizable Azerbaijani minority, with different estimates placing its numbers anywhere from 16 percent to a quarter of the country’s total population. Despite the fact that Persians and Azerbaijan share the same faith, Shi’a Islam, and that Iranian Supreme Leader Ayatollah Ali Khamenei is half Azerbaijani, Iran views a prosperous Azerbaijan as a threat.

“[The Iranians] don’t really like to see Israel being a close partner with Azerbaijan. Iran follows the relations between Israel and Azerbaijan closely, and they are not happy about it,” said Idan.

During Netanyahu’s visit, Azerbaijani President Ilham Aliyev made his first public revelation on the extent of Israel’s military ties with Azerbaijan. Aliyev said that to date, his country has purchased close to $5 billion in defense equipment from the Jewish state.

In Kazakhstan—which has warmer ties with Iran than Azerbaijan—Iran also looms large in the nation’s ties with Israel. When Netanyahu met with Kazakh President Nursultan Nazarbayev, the Israeli leader asked Nazarbayev if he could deliver a message to Iranian President Hassan Rouhani, who is visiting Kazakhstan next week.

“Ask him why Iran continues to threaten us with annihilation,” Netanyahu reportedly told Nazarbayev. “Don’t you understand? We’re not a rabbit. We’re a tiger…if Iran attacks Israel, it will put itself at risk.”

While both Azerbaijan and Kazakhstan have long histories of religious tolerance, in recent years radical Islam has started to pose a threat in the region. This is especially true in Kazakhstan, which is facing an uptick in terror attacks over the past year—including its deadliest attack ever in June, in which Islamic terrorists killed 25 people in the city of Aktobe.

“Kazakhstan has had some serious Islamic terrorism incidents,” Shaffer told JNS.org “They are starting to build real borders with their neighbors. So things like border control and counterterrorism as well as understanding how to deal with these Islamic terrorism threats is really important.”

In his meeting with Netanyahu, Nazarbayev announced that he requested Israel’s assistance in helping to train Kazakh special forces to fight terrorism.

A model for the Muslim world

Prof. Idan told JNS.org that Israel and Azerbaijan see many similarities in each other that form the basis of their relations.

“Azerbaijan sees Israel as a model, a country that is located in a very tough neighborhood that is succeeding and keeping its sovereignty while also having this great prosperity in its economy, science and military,” he said.

Israel, he said, “has great respect for Azeribajan over its treatment of the Jews and feel they have a lot to contribute in high-tech, culture and health to help the country.”

Shaffer believes that Israel needs these Central Asian countries not only on a pragmatic level, but also to show Israeli children that the Muslim world isn’t entirely against Jews and that they should not grow up fearing Muslims.

“When they see the Israeli flag flying together with the Azerbaijani flag, which has the Muslim crescent on it, it does provide some encouragement to other Muslim countries who may not want to delegitimize Israel,” she said.

Azerbaijan’s Suleymanov, meanwhile, believes his country can serve as an honest broker in efforts to resolve the Israeli-Palestinian conflict.

“Because Azerbaijan has such a good relationship with Israel and is also very supportive of the Palestinian people,” he said, “that provides a certain opportunity to speak to both sides with equal authority.”