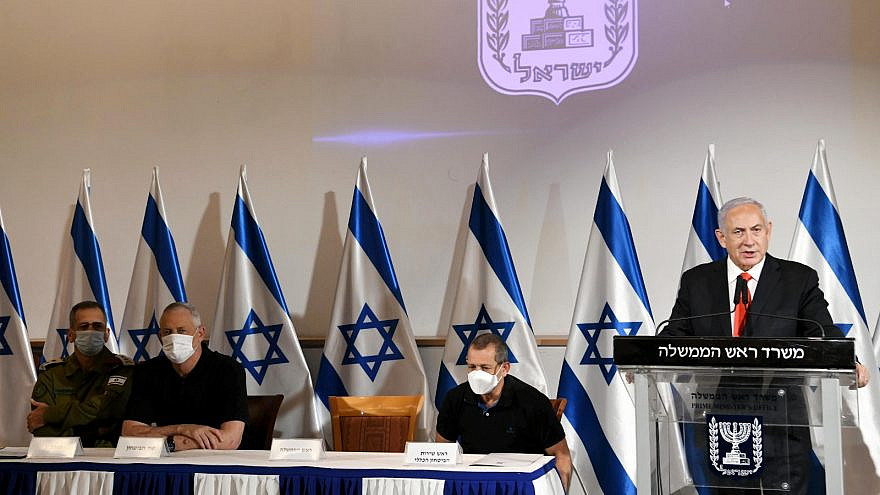 Israeli Prime Minister Benjamin Netanyahu speaks to the media about an onslaught of rocket attacks coming from Gaza and the response by the Israel Defense Forces, May 11, 2021. Credit: Amos Ben-Gershom/GPO.
Spread the word.
Help JNS grow!
Share now:

(May 11, 2021 / JNS) In a joint address late Tuesday, Israeli Prime Minister Benjamin Netanyahu and Defense Minister Benny Gantz told its citizens that terror groups in the Gaza Strip will pay a heavy price for the rocket fire that started on Monday, Jerusalem Day.

“We are in the midst of a major campaign—‘Operation Guardian of the Walls.’ Yesterday and today, the [Israel Defense Forces] attacked hundreds of Hamas and Islamic Jihad terrorist targets in the Gaza Strip. We have eliminated dozens of terrorists, including senior commanders,” said Netanyahu. “We have bombed Hamas command centers and toppled buildings that serve the terrorist organizations. We will continue to attack with all force.”

The prime minister said he has finished consultations with the heads of the security establishment, and that Hamas and Islamic Jihad “have paid and will pay a very heavy price for their aggression.”

“Citizens of Israel, we stand united against a reprehensible enemy. We all grieve for those who have been killed. We all pray for the well-being of the wounded. We all stand behind the IDF and the security forces.”

Gantz said the IDF still has “a great many targets in the pipeline,” and that the Gaza terror groups “have been severely hit and will continue to be hit due to their reckless decision to fire at Israel.”

The defense minister also urged unity and calm, assuring that the IDF protects Israel’s Jews and Arabs, and warned against violence after riots in Israeli-Arab communities.

“We will restore quiet and security for the long term,” he vowed.

IDF Chief of Staff Aviv Kochavi also addressed the country, reporting that the military had hit more than 500 targets in Gaza in the past two days, killing dozens of terror operatives.

“We are determined to strike terror groups in the most serious way possible,” he said.

The joint appearance by Israel’s leaders came after an unprecedented barrage of rockets fired on the Tel Aviv region on Tuesday evening.

Hamas, which claimed that it fired 130-plus rockets on central Israel on Tuesday night, said that it has set a “new balance of power” with Israel.

“We have achieved victory in the battle for Jerusalem, the defense of Jerusalem,” said Hamas senior leader Ismail Haniyeh.