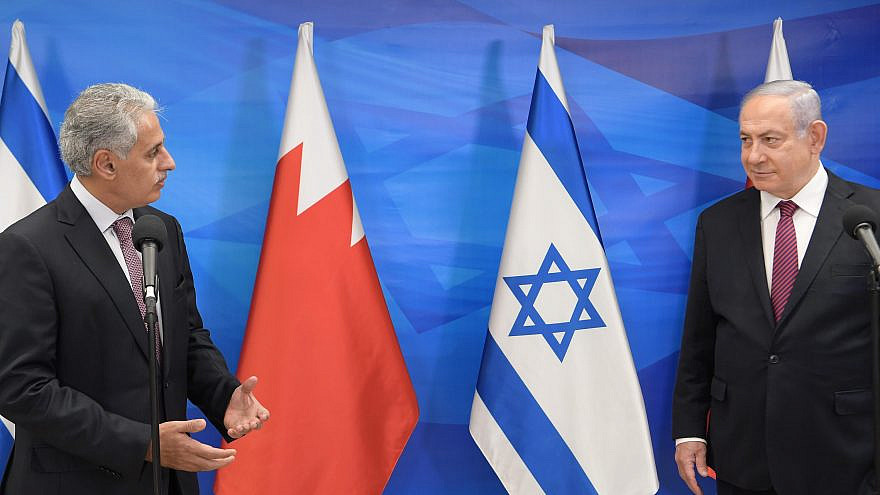 The group is scheduled to participate in a number of working meetings with key figures in the Israeli tourism industry, revolving around mutual promotion packages and initiatives, among them making Israel a destination for Gulf Air flights from other countries. Al Zayani is slated to sign a Memorandum of Understanding with his Israeli counterpart, Tourism Minister Orit Farkash-Hacohen.

“Welcome, Your Excellency, Mr. Zayed Al Zayani, and your distinguished delegation,” said Netanyahu at the start of the meeting.

“These are wondrous days. This is the day when we realize peace, because of the courageous decision made by King Hamad, because of the extraordinary energy and initiative of Bahrainis and Israelis who are eager to embrace one another, to get to know one another, to do business with one another in all there is: in tourism and commerce and industry,” said Netanyahu.

“We’ve signed some agreements. We have more to go, and more importantly, I think we understand this is a real peace—a peace between our peoples, a peace that will open economic benefits that were unimaginable just a few months ago, but now are coming to be. And I think this will broaden the circle of peace not only for our own two peoples but for all countries in the Middle East and perhaps beyond,” he said.

“So I want to welcome you in the spirit of peace and prosperity and cooperation and friendship. Welcome.”

Al Zayani thanked Netanyahu for the warm reception and said he and the delegation had experienced “a lot of good intentions” since arriving on Tuesday.

“The steps we are building today are everlasting steps for future generations,” he said, that “would leave this world a better place for them than we have inherited.”

While the diplomatic foundation for peace had been laid, Al Zayani continued, “It’s upon us now, as ministers of trade and commerce and industry and tourism, to move forward, to facilitate that, to forge the peace, by having direct and constant integration between the business communities, which we believe will filter down even to the common citizens in Bahrain and Israel.”

“We are genuine about this; we are fully committed. And, like you mentioned, the pace we’re moving at, it’s quite a fast pace because we want to catch up on lost time. We feel that there is a huge, an immense, opportunity to even develop it further, not just in terms of business, in terms of culture, sport, exchange, tourism, and that will come very quickly, hopefully,” he added.

Agreeing to the peace deal “was a courageous move by His Majesty, and yourself, and we thank you for that,” said Al Zayani. “We thank the American administration led by [U.S] President [Donald] Trump for facilitating it.”

Netanyahu also expressed gratitude to the administration in Washington.

“President Trump and his able peace team deserve a great deal of credit for helping bring this peace agreement about. I would say that it’s flourishing in many ways, including on COVID,” he said. “We’ll discuss cooperation on this because things here are also moving at a very rapid pace. As you know, they’re starting to inoculate in Britain. We’re expecting inoculations here very soon as well.”