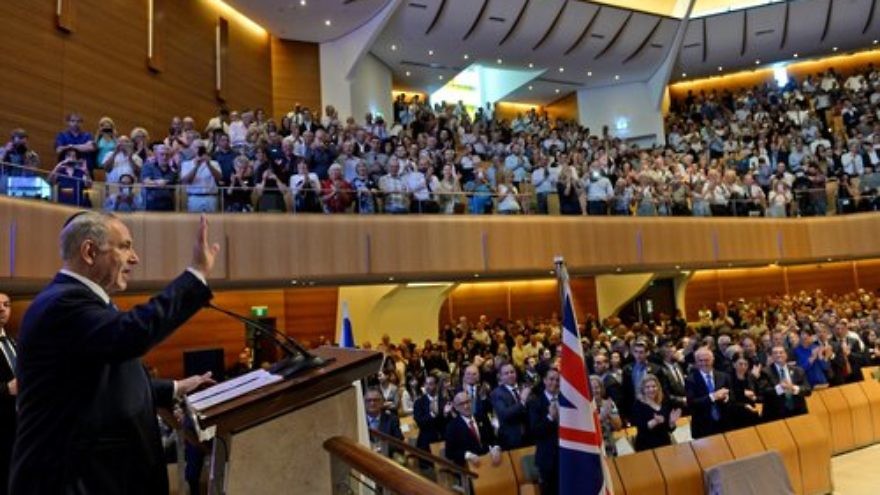 Fresh off his first official visit with U.S. President Donald Trump, Israeli Prime Minister Benjamin Netanyahu has shifted his focus once again towards expanding and bolstering Israel’s alliances beyond the North American continent.

Netanyahu began a historic five-day trip to Australia Feb. 22, in a bid to refresh Israel’s economic and political relations with an important and longtime ally. Yet the prime minister’s visit also came at a time of questions over the future of the two-state solution to the Israeli-Palestinian conflict as well as international concern over the Jewish state’s settlement policy in the disputed territories.

Israeli Presidents Chaim Herzog, in 1986, and Moshe Katsav, in 2005, had previously visited Australia, but Netanyahu was forced to cancel a previously scheduled visit there in 2014 due to the summer’s Israel-Hamas war. Netanyahu’s visit to Australia this week put an end to the historical anomaly of an Israeli prime minister never visiting one of Israel’s closest allies.

“Australia and Israel have a strong relationship, which is evident in a number of ways—not least of which has been Australian support for Israel politically, with the economic ties growing dramatically in recent years,” Jeremy Jones, director of international affairs for the Australia/Israel & Jewish Affairs Council (AIJAC), told JNS.org.

Netanyahu’s travels also came amid a growing focus on building Israeli relations with Asia. Prior to visiting Australia, Netanyahu made a trip Singapore, where he declared that Israel “is pivoting towards Asia in a very clear and purposeful way.” The prime minister is scheduled to visit China next month.

“It is not unreasonable to think that the development of Israel’s ties with Asia has given Australia—with its geographic, economic and political ties with Asia—a higher significance in Israeli diplomatic thinking,” Jones said.

“Our trade is $1 billion. It should be at least double or triple that,” Netanyahu told Australian Prime Minister Malcolm Turnbull and business leaders.

“I’d like to encourage the Australian and Israeli companies to increase in trade,” he added.

Turnbull and Netanyahu signed a number of bilateral agreements during the visit, including a pact to “bolster ties on education and innovation, and to explore opportunities for future collaboration in the fields of agriculture, water, energy, and environmental protection,” according to the Israeli Prime Minister’s Office.

“Politically, Israel’s leadership presented strong arguments for concern with Iran. There will be deepening of the economic relationship—Israel as the ‘start-up nation,’ Australia as the ‘innovation nation,’ has been a theme of the visit,” AIJAC’s Jones told JNS.org.

“The visit has helped Australian policymakers in their understanding of the challenges in peacemaking, counter-terrorism and geo-strategy in the era of Donald Trump, the growth of Asian economic power, and political changes in Europe,” he said.

“My deepest fear is we are drifting toward the disintegration and death of an independent Palestinian state. This would be a tragedy for both the Palestinian and Israeli people,” Rudd said in a recent interview with the Sydney Morning Herald.

“For Israel, the isolation of Palestine and the removal of the prospect of both land and statehood may well lead to the re-radicalization of the Palestinian people,” he added. “I deeply fear the possibility of a third intifada. And so, the time has come for Australia to join countries like Sweden and the Holy See in formally recognizing the Palestinian state.”

Jones told JNS.org that there is a “vigorous campaign” underway in Australia for the recognition of a Palestinian state. The effort, he said, “is being run by people who do not accept the legitimacy of Israel, but is publicly supported by some who claim they support ‘two states.’ This latter group generally argue that many other countries have already done so making Australia a pariah for not doing it, particularly with the Arab world.”

At the same time, Prof. Anthony Billingsley, an international relations and Middle East expert at the University of New South Wales (UNSW) in Sydney, believes that reports on Labor’s push to recognize Palestinian statehood have been “overstated.”

“Labor is deeply divided over the question of Israel and Palestine to the point of near impotence,” Billingsley told JNS.org.

“These suggestions [to recognize Palestinian statehood] are significant, but are unlikely to be enough to change the current uncomfortable balance of forces in the party,” he said.

Instead, Billingsley believes Netanyahu’s visit marks an opportunity for Australia’s prime minister to further divide his opposition on the issue of Israel and the Palestinians.

“Turnbull has adopted a very strong pro-Israel position over the past few days, largely to wedge the Labor Party by aggravating the internal divisions over the Israel-Palestine issue,” Billingsley said.

In a meeting with Netanyahu, opposition and Labor Party leader Bill Shorten raised concerns about Israeli settlements. There was no reported mention of a political push for recognizing Palestinian statehood, though Shorten did express general support for that concept.

“We want to see Israel safe and secure of its borders. We support the rights of the Palestinian people to have their own state,” Shorten told reporters after the meeting, the Associated Press reported. He added that “settlements and their expansion are a roadblock to peace, that’s damaging to the peace process.”

Shahar Burla, an Israeli-born Sydney-based contributing editor to the Australian left-leaning news website +61J, told JNS.org said that he fears Netanyahu’s visit may do long-term damage to support for Israel in Australia across political lines.

“The biggest danger for Israel is losing the bipartisan support like we have seen over the last week or two inside the Labor Party,” Burla said, referring to the Palestinian statehood proposal.

Australia and the two-state solution

Some of the most significant issues to come to the fore lately for Australian Labor politicians were both the Israeli Knesset’s recently passed law legalizing settlement outposts, and Netanyahu’s uncertain support for a two-state solution, Burla explained.

“I think some politicians here realized it’s not only the Palestinians to be blamed here, it is also the Israeli government, especially the current right-wing Israeli government, which is not ready for any compromise, and they (Australian Labor leaders) feel it is about time to pressure Israel on those issues,” he told JNS.org.

In the week before Netanyahu’s visit, Foreign Minister Julie Bishop, a member of the Liberal Party, suggested Australia may be open to alternatives to a two-state solution.

“If they can come up with another solution that they were prepared to live with that ensured that the Israelis and the Palestinians could live side by side, live together behind internationally recognized boundaries, then of course the world should support that,” she said.

Her statement came shortly after Netanyahu’s White House meeting Trump, who made public comments that seemingly abandoned the longstanding unequivocal U.S. support for two states. Turnbull, however, has maintained that Australia supports a two-state solution.

“We support an outcome which has two states where Israelis, the Israeli people, the Palestinian people live side-by-side as a result of direct negotiations between them—that is the fundamental point—and live together in peace and the security that they are entitled to expect,” he told Netanyahu during the visit. The Australian head of state’s comments were followed up by a joint statement from Netanyahu and Turnbull, in which Netanyahu notably did not endorse two states.

“Both countries re-stated their support for a directly negotiated peace between Israel and the Palestinians. Australia affirmed its support for a two-state solution,” the joint statement said.

UNSW’s Billingsley told JNS.org that Australia will likely stick to its support for a two-state solution as it seeks to maintain diplomatic relations abroad and a political consensus at home.

“On Middle East issues, Australia is not a party principal and has traditionally sought safety in numbers,” Billingsley said. “Supporting a two-state solution has been the safest [international] and smoothest [move domestic] policy to pursue.”