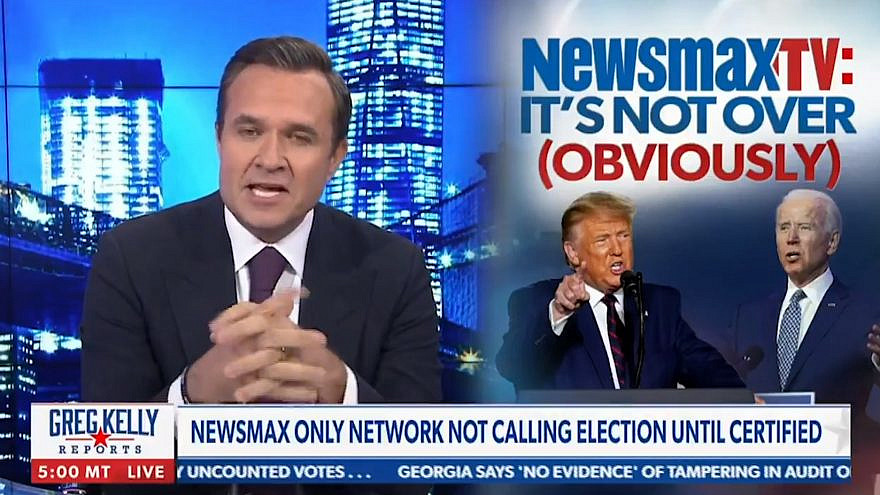 (December 24, 2020 / JNS) In the weeks following the presidential election, there has been upheaval within the conservative media world that has long been dominated by Fox News. Lesser-known cable-TV companies, such as Newsmax and OAN, have seen explosive growth as these networks have drawn in supporters of U.S. President Donald Trump and his claims of election fraud.

Originally founded in 1998 by Chris Ruddy as a conservative news website, the company launched its cable-news channel in 2014. Today, Newsmax—headquartered in Boca Raton, Fla., with offices in New York, Los Angeles and Washington—says its channel reaches 70 million households. Its network is found on most major cable and satellite operators, such as DirecTV, Dish, Xfinity, Fios, Optimum and even newer streaming services like Fubo and Sling.

However, the company has hit some barriers in its expansion with cable operators such as RCN, which serves major markets such as New York, Washington, D.C., Boston, Philadelphia and Chicago, refusing to carry its network. RCN, along with its partners Grande Communications and Wave Broadband, form the sixth-largest cable operator in the United States with some 1 million customers.

Newsmax has accused RCN of “liberal bias” and has urged its viewers to contact the company to demand that it carry Newsmax.

“RCN is the only major cable company not taking Newsmax, and we’ve heard it has everything to do with its chairman, who is a strong Democrat who opposes Trump and backed financially [President-elect Joe] Biden and [California Sen.] Adam Schiff,” Newsmax CEO Christopher Ruddy told JNS.

RCN is managed by Patriot Media, led by Steve Simmons. According to FEC data, Simmons donated to several Democrats, including Joe Biden, Adam Schiff and Seth Moulton during the 2019 presidential primaries. Recently, it was announced that Patriot Media was sold by TPG (Texas Pacific Group) from Stonepeak Infrastructure Partners.

While RCN did not respond to a JNS inquiry, an RCN official told the Jewish Press of New York that it does not “currently have information available as to when or if Newsmax will be added to our lineup,” and further invited customers to email a request for this channel.

Since the Nov. 3 election, Newsmax has seen explosive growth in viewership at the expense of its much larger, right-wing cable-news rival Fox News.

According to Nielsen, in the final full week before the election, Fox News had 90 times greater primetime ratings than Newsmax; however, in the first full week after the election, the lead by Fox News declined to less than nine times the ratings, and by the end of November, it was down to seven times.

While Fox News remains the most-watched cable-news network—besting its traditional rivals CNN and MSNBC—Newsmax has seen considerable momentum with 401,000 primetime views by the end of November, compared to 57,000 in late October, according to Nielsen. The recent Nielsen ratings list Newsmax as a top 25 cable-news channel and the fourth-ranked news channel ahead of HLN, CNBC, and Fox Business.

Much of Newsmax’s momentum has been tied to Trump’s legal challenges against the results of the November election. The president has promoted the network on his social media, and conservative commentators have lambasted Fox News for its coverage of the election, specifically its decision to call the election for Biden.

While conservatives have gravitated towards Newsmax and other outlets such as OAN since the election, some supporters of Israel have long seen news outlets like Fox News, Newsmax and others have a place for fairer coverage of the Jewish state.

“Since I founded Newsmax in 1998, we have always stood with Israel, our lone democratic ally in the Mideast. Most U.S. media has largely been hostile to Israel, making Newsmax’s role even more important,” said Ruddy.

‘The news is a different story’

Alex Safian, associate director of CAMERA, a media watchdog organization, told JNS that both Fox News and Newsmax have a number of opinion hosts who are generally fair to Israel.

“Opinion hosts on both FoxNews and NewsMaxTV are generally fair to Israel,” he said. “Fox’s Sean Hannity is an unabashed friend of Israel, and NewsMaxTV hosts like Greg Kelly and Seb Gorka have also been fair.”

“But the news is a different story, with Fox’s former Jerusalem reporters Reena Ninan and Conor Powell usually bashing Israel, and current reporter Trey Yingst not much better,” said Safian, pointing a recent article on COVID in Gaza, which Yingst did not provide an Israeli rebuttal to charges by a Hamas official that Israel’s blockade of the coastal territory was harming efforts to fight the virus in the coastal territory.

“It’s fine for Yingst to quote [Hamas official Dr. Basem] Naim’s charge, but he lets it stand unrebutted, with no opportunity given to Israeli officials to point out—accurately—that it’s totally false. Not to say that all of Yingst’s reports are hostile towards Israel, just that a lot of them are,” he said. “Newsmax doesn’t seem to have an Israel bureau, but if they open one it seems likely their viewers will expect them to do a better job than Fox has been doing.”

Supporters of Israel have accused mainstream media outlets of bias and have contended that conservative outlets such as Fox News have provided fairer coverage of Israel. Fox News has capitalized on this by promoting headlines accusing outlets like The New York Times of anti-Israel bias. This appeal to conservatives led the network to cable-news dominance and a strong influence over conservative thought and access to the Trump administration in recent years.

“For a very long time, Newsmax and Chris Ruddy have been among the State of Israel’s closest friends in U.S. media,” he noted. “It’s very surprising RCN isn’t carrying them.”

Ruddy said he understands that everyone may not support Israel or the president, but that they should have the opportunity to hear varying sides of political news and opinion. “We get everyone doesn’t like Trump or Israel, but if they were truly liberal they would be open to diverse points of view, which clearly RCN is not.”