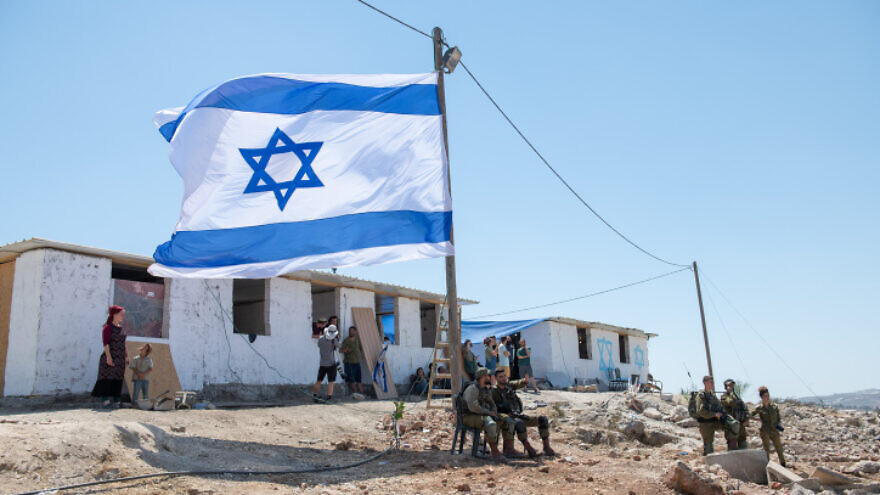 The unauthorized Israeli outpost of Evyatar before its evacuation as part of a deal with the government, July 2, 2021. Photo by Sraya Diamant/Flash90.
Spread the word.
Help JNS grow!
Share now:

(July 5, 2021 / JNS) Norway’s largest pension fund, KLP, announced on Monday that it was disinvesting from 16 companies connected with Israeli settlements in Judea and Samaria, including Motorola and Israeli telecom giant Bezeq.

Following a “thorough assessment” of a list of companies involved in the settlements published last year by the U.N. High Commissioner for Human Rights, KLP has sold shares and bonds in these firms worth approximately $32 million, the fund said in a statement.

“Our assessment is that there is an unacceptable risk that the excluded companies will contribute to the violation of human rights in war and conflict situations through their connection to the Israeli settlements in the occupied West Bank,” said senior KLP investment analyst Kiran Aziz.

KLP had contacted the affected companies to attempt to “establish a dialogue” before deciding to disinvest, but the companies failed to respond, said Aziz.

“We always want to have a dialogue with the companies, to influence them through our ownership,” she said, adding that when that influence “did not yield results,” KLP chose to exclude the companies.