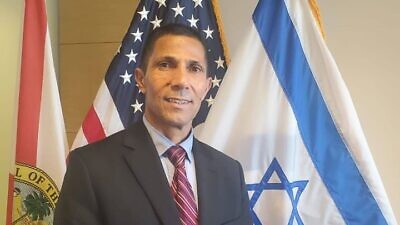 brief
Israel set to appoint first-ever Bedouin ambassador to head Eritrea mission
JNS
Ishmael Khaldi, who has held several Foreign Ministry positions since becoming Israel’s first Bedouin diplomat over a decade ago, is known as a staunch defender of the Jewish state.

(June 4, 2020 / JNS) If George Floyd, the African-American strangled to death by the knee of Minneapolis policeman Derek Chauvin, had been white, his death would have elicited the same horrified reaction on my part.

A violent killing by a member of the police department is unfathomable and inexcusable.  But so is the behavior of the angry “Black Lives Matter” mob.  Martin Luther King Jr. surely would have agreed. He would have considered the current violence and looting to devalue the cause and decay the role of blacks.

King outlined his dream—as the best-selling author Douglas Murray recalled in his 2019 book, The Madness of the Crowds: Gender, Race and Identity—at the Lincoln Memorial on August 28, 1963.

Describing how black Americans first were slaves and then second-class citizens, he denounced the laws of racial segregation (that still existed in certain state at the time), and said that he dreamed his children should “one day live in a nation where they will not be judged by the color of their skin, but by the content of their character.”

It is a concept that he reiterated repeatedly. To a large extent, his dream was realized. The laws in the United States today are based on equality, in accordance with the Declaration of Independence, which states that “all men are created equal.” That said, American society is like all democratic societies, in the sense that it is not thoroughly just, and suffers from prejudices.

This is not what is under assault right now by the radicals, however. It is, rather, America’s past, which is viewed by the intersectional cultural wave as genetically despicable—a white world to be eradicated forever and replaced with a new culture that will generate a new political power. Such a point of view, of course, both generates and justifies violence.

The tsunami of looting and violence that we have been witnessing for the past several days has nothing to do with the fight for equality or justice. It is an ideological barrier in the United States, and expanding throughout the West, which reflects the culture of guilt and revenge typical of totalitarianism, fascism and Communism. It invents and perpetuates an eternity of conflict between right (black, women, gay, poor, etc.) and wrong (whites, males, straights, etc.). It projects the fears of yesterday, even of centuries ago, on today’s world—convoluting every aspect of humanity and field of history.

Thus, all great works of art, literature and music are considered to represent the exaltation of white, male, heterosexual culture, and must be replaced by “black studies,” “women’s studies” and “gay studies,” which elevate victimhood at the hands of “oppressors.”

This vein has transformed American academia from a milieu of independent thought to a place of worship at the altar of gender and skin color. Universities such as Harvard, Yale, Arizona and Pennsylvania have pledged loyalty to “racial equity during the demonstrations,” as though that has anything to do with what’s going on now.

Together with Hollywood protagonists, professors have worked hard to pave the way for a cultural revolution that strives for a society in which victims and their marginalized lives are fundamental.

The young people destroying shops, stealing goods, shooting and beating have been shaped by this intersectional culture, which bows to suffering and claims to aspire to correct the societal ills wrought on their ancestors.

The idea of being totally persecuted by an ever-increasing group of “others” naturally leads to a feeling of entitlement—the entitlement to react violently.

There is nothing strange or unreasonable about a president faced with a burning country to warn that he might have to enlist the military to intervene. But if he is white, as Donald Trump is, he is portrayed as a supremacist.

In 2014, I was in the United States to cover the story of huge protests, instigated by a new movement called “Black Lives Matter,” following police brutality against African American boys. Barack Obama was president at the time.

If his presidency illustrated anything, it is that even if slavery once existed in the U.S. and social distress continued to be a problem, black lives did matter to Americans. A lot. And they still do today.

Journalist Fiamma Nirenstein was a member of the Italian Parliament (2008-13), where she served as vice president of the Committee on Foreign Affairs in the Chamber of Deputies. She served in the Council of Europe in Strasbourg, and established and chaired the Committee for the Inquiry Into Anti-Semitism. A founding member of the international Friends of Israel Initiative, she has written 13 books, including “Israel Is Us” (2009). Currently, she is a fellow at the Jerusalem Center for Public Affairs.