(October 25, 2022 / JNS) Wayne Owens was an affable and respected member of Congress from Utah, but he was also a political anomaly—a liberal Democrat from a conservative Republican state. In my dealings with Wayne in Israel and his office in Washington, D.C., I also saw the former Mormon missionary in his role as the “unofficial foreign minister” for his church. He visited Israel frequently and secured the Israeli government’s permission to build the impressive Mormon Center on the Mount of Olives. After he left Congress, he founded the S. Daniel Abraham Center for Middle East Peace. Tragically, he died in 2002 of a heart attack in Tel Aviv.

I have been reminded of Owens’s work on behalf of American Mormons as I observe the activities of Rep. Ilhan Omar (D-Minn.), an advocate for Muslim Kashmir, outspoken opponent of India, proponent of radical Islam, enemy of Israel and unofficial ambassador for the Muslim Brotherhood and its U.S. affiliate the Council on American-Islamic Relations (CAIR). 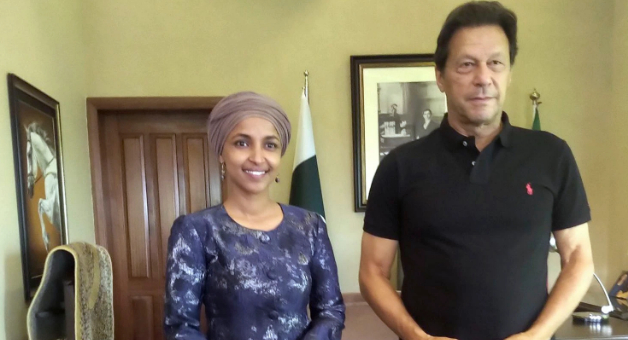 Many Americans know of Omar because of her anti-Israel record and shocking anti-Semitic conspiracy theories about American Jews using their “Benjamins” to buy control of Congress. Omar apologized for some of her racist comments, but her Democratic colleagues refused to take disciplinary measures against her, and her constituents did not reject her at the polls.

In other words, the congresswoman wears a Teflon hijab.

Omar’s hatred of Israel is only the tip of the various foreign alliances the former Somalian has fostered. She has met with the leaders of Pakistan—including an ousted prime minister—and Turkey’s President Recep Tayyip Erdoğan. She rails against U.S. ties with India because of the country’s alleged human rights violations against Muslims, but has barely said a word about the ongoing citizens’ revolt in Iran or the Iranian regime’s brutal attempts to suppress it. Omar also voted against the U.S. ban on Russian oil and funding for Iron Dome.

Minnesota State Senator Ilhan Omar announced her intention to run for the U.S. House of Representatives in June 2018. According to the Federal Election Commission, by August 2018, she had begun to receive campaign contributions from CAIR:

During the trial, “evidence in the case put CAIR’s founder, Nihad Awad, at a Philadelphia meeting of alleged Hamas supporters that was secretly watched and recorded by the FBI,” the Associated Press reported.

CAIR had been grooming Omar for national office since 2017. She was the keynote speaker at CAIR’s Annual Banquet in Chicago that February. At the 2019 Banquet, she debuted as a member of the House of Representatives. Omar is now a regular speaker at CAIR events. 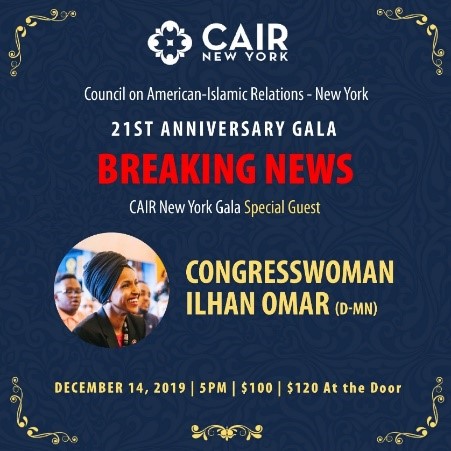 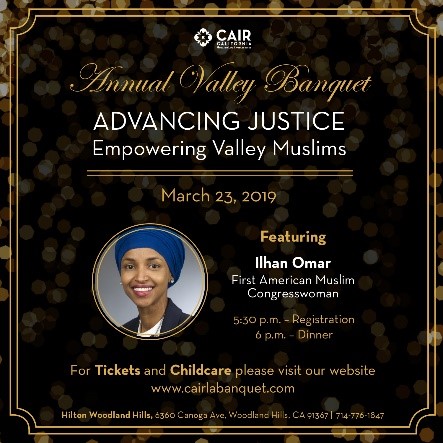 In Sept. 2017, while still a state senator, Omar met with Turkish President Recep Tayyip Erdoğan in New York. The reasons for such a high-level meeting are unclear, but it is not improbable that it was to express CAIR’s support for Erdoğan. Indeed, CAIR leaders met with Erdoğan the same day. The Turkish president was in need of such support, as he was facing criticism from the U.S. government and American Jews after he allowed Hamas—which had just been expelled from Saudi Arabia—to establish itself in Turkey.

Moreover, Omar was leading a delegation of Somalis who were apparently members of the Somali parliament. Details of the meeting were few. A Somali-English newspaper published in Minnesota, The Tusmo Times, ran an account of the meeting, but alas, the story disappeared from the internet.

Thanks to internet recovery archives and a translation, the Tusmo Times article was found. Omar told the paper that, in her one-hour meeting, she “discussed with Erdogan how to promote the 10 members of the Somali parliament and the Somali parliamentarians.” The Tusmo Times continued, “Omar also discussed with Erdogan how his government would contribute to the development of the fisheries sector in Somalia, investment and trade cooperation between Somalia and Turkey. Omar and Erdogan also discussed strengthening relations between Somalia and Turkey in the United States.”

Who was Omar representing? The Minnesota Senate or Somalian politicians? Was she required to register with the U.S. Justice Department as a foreign agent for Somalia? Did the Tusmo Times article disappear in order to cover up her violation of the Foreign Agents Registration Act? 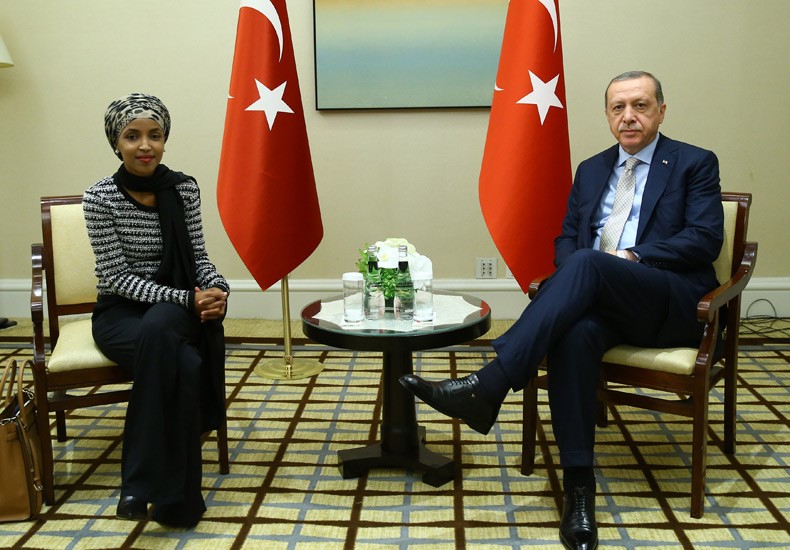 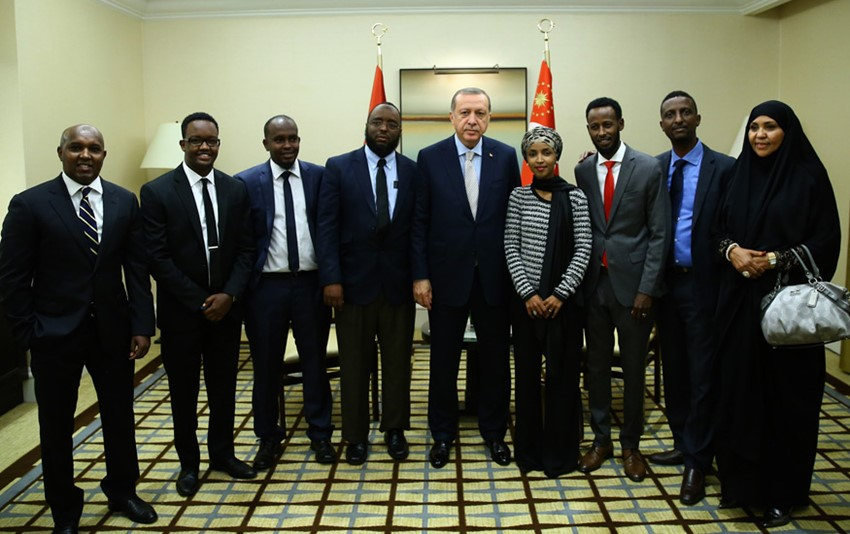 President Recep Tayyip Erdoğan and then-Minnesota State Senator Ilhan Omar with a Somali delegation to Turkey. Omar’s then-husband is next to her wearing a red tie. Source: Tusmo Times/Wayback Machine.

In Sept. 2019, now-Rep. Omar received a $1,500 campaign contribution from the Turkish American National Steering Committee, a lobbying group with ties to Erdoğan. On Oct. 30, 2019, Omar was one of the few congresspeople to abstain on a bill that labeled the Turkish massacre of Armenians a “genocide.” A quid pro quo is unproven, but not improbable.

When Omar finally spoke out on Oct. 8, 2022 on the ongoing Iranian protests, she inappropriately compared the arrest, torture and murder of Iranian women to American women fighting for abortion rights.

Omar then used her Twitter account to promote a Responsible Statecraft article that claimed the leading Iranian dissident Masih Alinejad “isn’t just an Iranian journalist and activist. She’s on the U.S. government payroll.” The publication in question was the house journal of the Quincy Institute, which is headed by Trita Parsi, the founder of the National Iranian American Council and the Iranian regime’s primary fellow traveler in the United States.

The Iranian mouthpiece Press TV effusively praised the Responsible Statecraft article, citing “Senator” Ilhan Omar in order to do so:

In March 2022, 414 Members of the House voted for a Russian oil ban and additional sanctions against the Kremlin for its attack on Ukraine. Only two Democrats voted against sanctions on Russia: Ilhan Omar and Cori Bush (D-Mo.), both members of the far-left “Squad” of Democratic congresspeople.

At the same time, Omar called for boycotting Saudi Arabia.

The Palestinians, of course

As of Aug. 2022, Omar had raised more than $2.3 million for her current congressional race, according to the Federal Election Commission. As expected, she received campaign contributions from supporters of her anti-Israel positions.

One example is the Sabri clan, who also contributed tens of thousands of dollars to Omar’s 2018 campaign. Some 20 years ago, the clan’s patriarch Basim Sabri, a wealthy real estate tycoon in Minneapolis, was convicted on three counts of bribing an elected official and served time in a federal penitentiary. His daughter Karmel, a leader in anti-Israel organizations, also contributes to Omar’s campaigns. 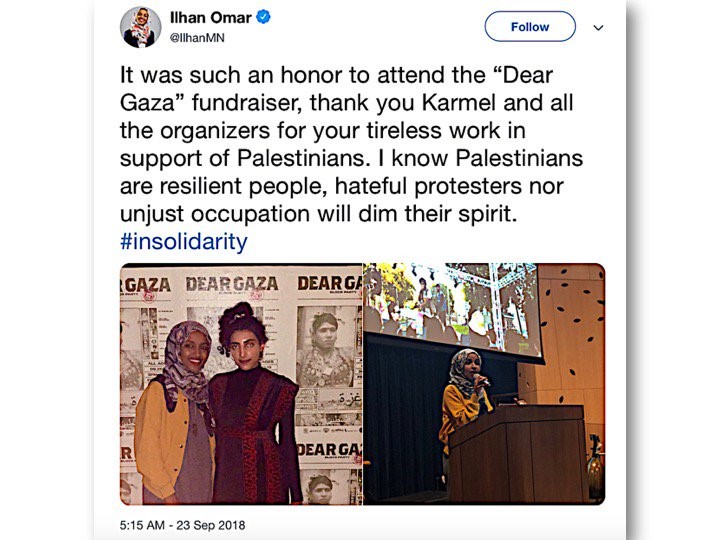 In April 2022, Rep. Omar conducted a private visit to Pakistan, where she met the country’s top leadership and visited the frontlines of “occupied Kashmir,” a region Pakistan and India have bitterly contested for decades. Omar was joined by her husband Timothy Mynett, a Pakistani-American businessman from Texas, and a former member of Congress. The U.S. State Department said her trip was private, and the sponsor of her visit has not been made public. 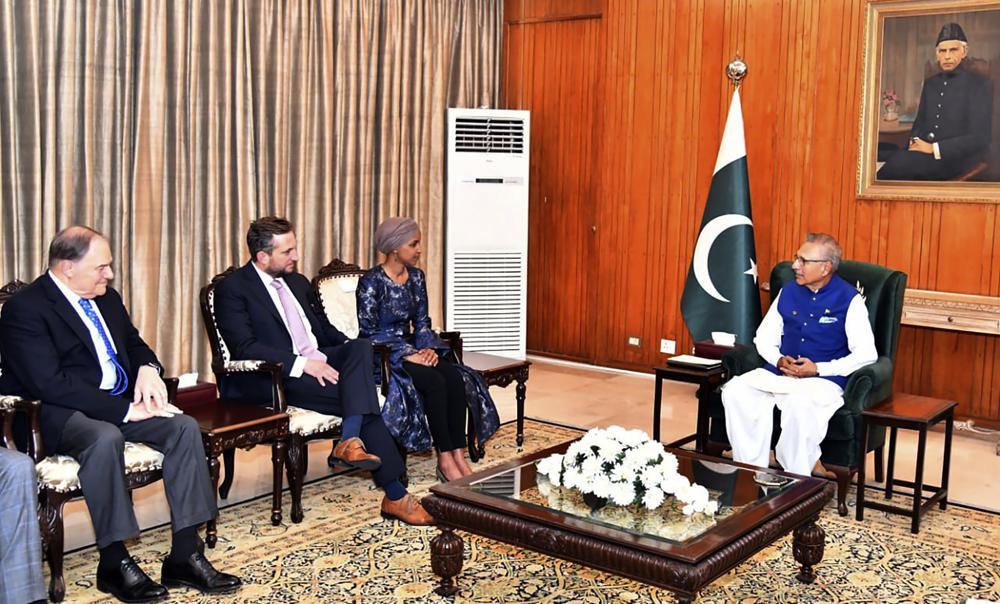 The photograph above shows Omar meeting with Pakistani President Arif Ali during the trip. Sitting to the left of Omar and her husband is former congressman Nicholas Lampson. Off-camera on the left is Texas magnate and Democratic Party contributor Tahir Javad, who is close to Pakistan’s leadership. According to the Federal Election Commission, Javad is a contributor to Omar’s 2022 campaign. Javad ran for Congress in Texas and lost in the Democratic primary. He owns a large conglomerate, and Lampson is the co-chief operating officer.

President Ali expressed appreciation for the “outstanding role” played by Omar “in upholding Muslim values, fighting against Islamophobia and in the cause of Palestinians and Kashmiris.” He told Omar, “The world must be made aware of the suppression and possible Muslim genocide in India.” 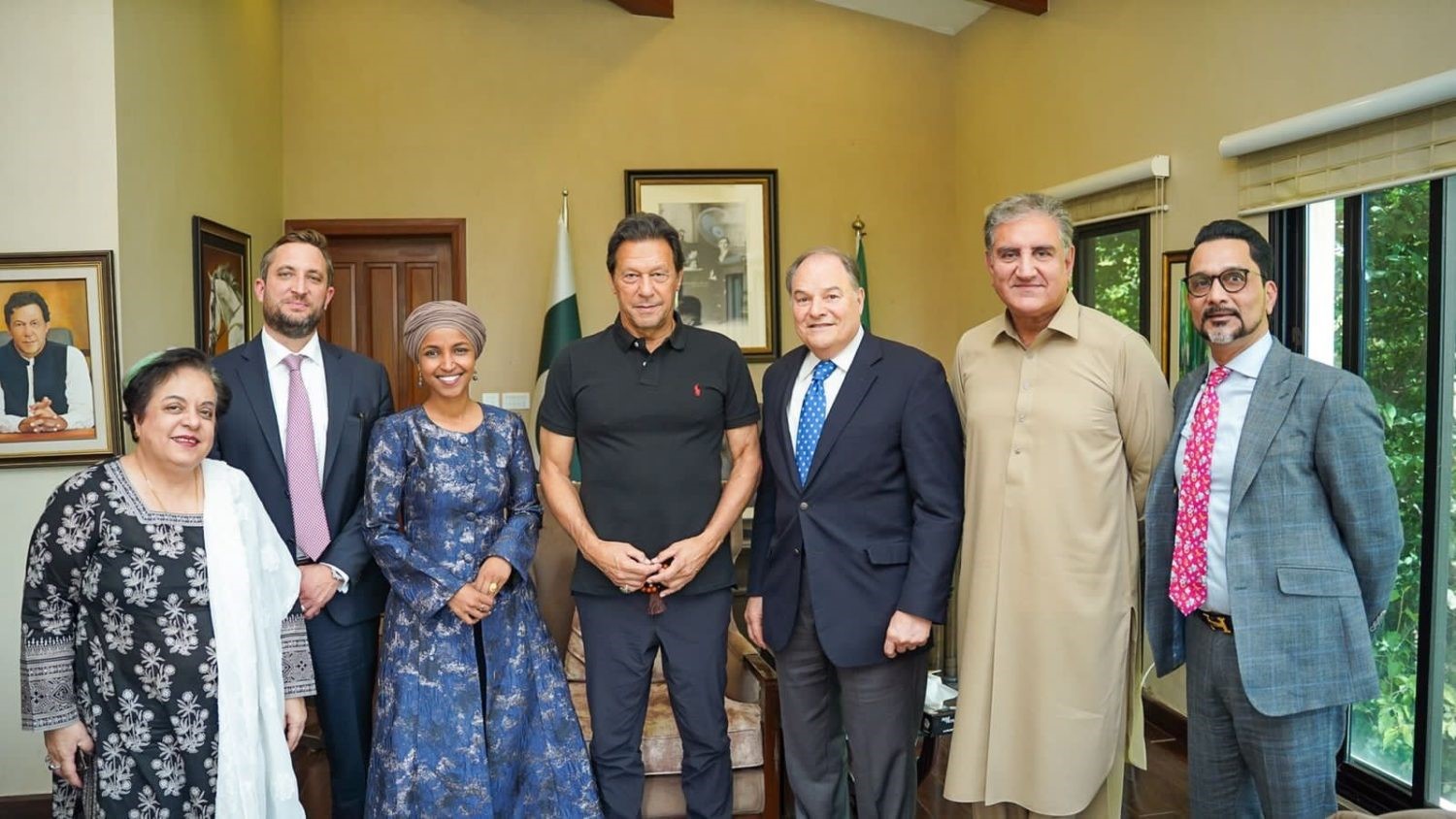 The photograph above shows Omar’s meeting with former Pakistani Prime Minister Imran Khan. Lampson stands next to Omar and Javad is on the far right. Two weeks earlier, Khan had charged the U.S. government with conspiring to oust him from office. He said he would not give in to “U.S.-backed regime change,” which, he claimed, handed power to “pliable crooks” and “national traitors.”

Omar also met with the President of Azad Kashmir, Sultan Mahmood Chaudhry. Omar pledged, “I already voiced serious concerns over the human rights violations in the Indian-occupied Kashmir and would take up the issue with the U.S. Congress as well as the Biden administration.” 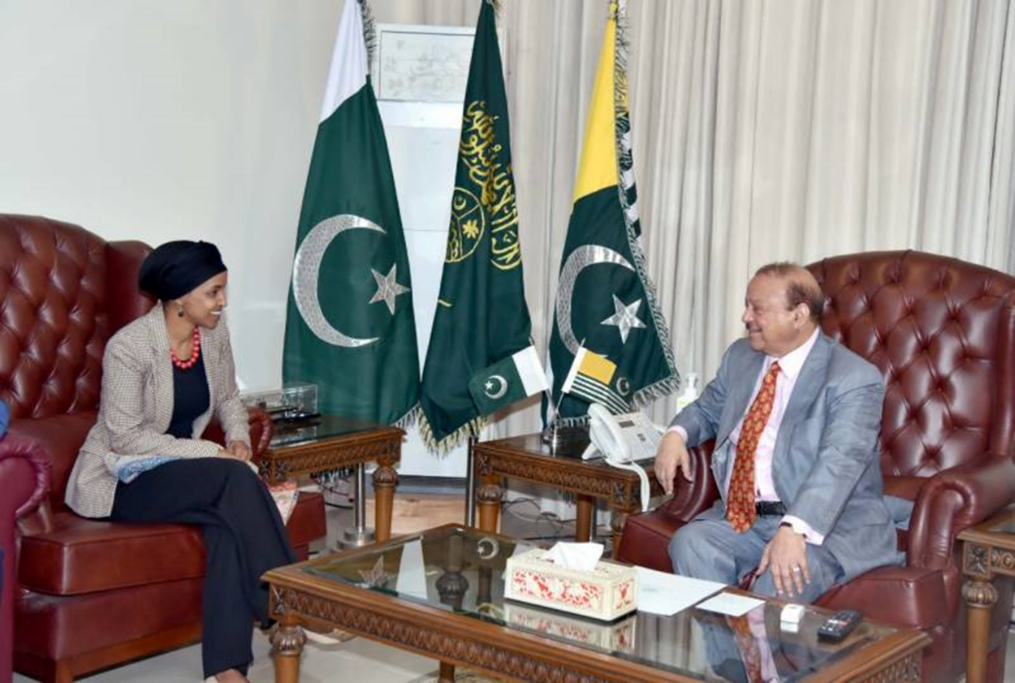 In addition, Omar paid an unusual visit to the tense Line of Control, which divides the Pakistani- and Indian-controlled parts of Kashmir.

Analysis of the anti-India movement indicates that the Muslim Brotherhood and Pakistani elements are behind the campaign. Pakistan is also training Hamas fighters, according to Pakistani Senator Raja Zafar-ul-Haq, cited by an Indian source last year. Two months after her junket to Pakistan, Omar introduced a resolution in the House of Representatives condemning alleged human rights violations by India. Specifically, Omar Res. 1196 condemned “human rights violations and violations of international religious freedom in India, including those targeting Muslims, Christians, Sikhs, Dalits, Adivasis and other religious and cultural minorities.” The resolution was referred to the House Foreign Affairs Committee, of which Omar is a member.

As Omar nears the last days of the 2022 congressional campaign, are her constituents aware of the issues on her agenda beyond local issues and abortion rights? Do they know that it is an agenda of slavish collaboration with far-flung countries where abortion is banned, women are tortured and terrorism is supported?

Lenny Ben-David served for 25 years in senior posts in AIPAC in Washington and Jerusalem. In 1997, he was appointed as Israel’s deputy chief of mission in the embassy in Washington, D.C., where he served until 2000 under three ambassadors and two prime ministers. He is the author of the book American Interests in the Holy Land Revealed in Early Photographs and editor of The Gaza War 2021: Hamas and Iran Attack Israel.