(December 16, 2021 / Jerusalem Center for Public Affairs) While the nuclear talks between Iran and world powers in Vienna are proceeding at a snail’s pace, satellite images from the Iranian Space Center were released on Dec. 12 showing Iran preparing to launch a vehicle into space. The action may be intended as leverage to further pressure the West in the negotiations; it is widely suspected that Iran is seeking to connect its nuclear capabilities to launch vehicles for nuclear weapons. In response to a warning by Britain, France and Germany (the “E3”) that the nuclear deal would soon become a “hollow shell,” Ali Bakri-Kani, who heads the Iranian team for talks, called for “real diplomacy” instead of “games of mutual accusations.”

After Iran’s launch of a powerful new three-stage rocket, the “Zuljanah” space launch vehicle (SLV), in February 2021, the Iranians claimed that the rocket could “loft a 500-pound payload as high as 310 miles.”

According to a Forbes Magazine analysis, the “Zuljanah” rocket “is adequate to place a satellite in low-Earth orbit (LEO) and, for Iran, a big step forward for both its space program and its effort to develop delivery vehicles for possible future nuclear warheads.”

An SLV is not just an SLV

Indeed, Iran Watch warns that “the systems that enable a space launch vehicle (SLV) to release a satellite at the right speed, in the right direction, and at the right time for it to enter orbit could also enable an ICBM to release its re-entry vehicle with a similar level of precision.” The U.S. Defense Intelligence Agency found that Iran’s new “Simorgh” (Safir-2) SLV “could be capable of ICBM ranges if configured as a ballistic missile.”

The new satellite images were taken over the Imam Khomeini Space Center in northeastern Iran’s Semnan province, a desert area 150 miles from Tehran. The photos indicate considerable activity at the space terminal, which reinforces assessments that Iran is about to launch a new SLV. The Imam Khomeini Spaceport is a permanent satellite launch site, from which ballistic missiles were previously launched. 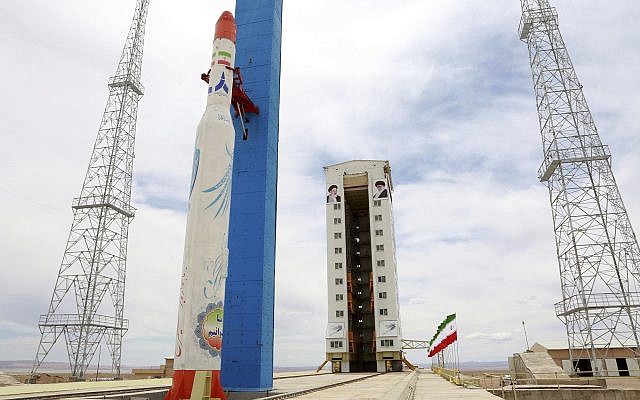 Despite several failed attempts, the Iranian Islamic Revolutionary Guard Corps (IRGC) Aerospace Force managed to launch for the first time a “Noor-1” military satellite on April 22, 2020, on board an indigenous three-stage “Qased” SLV. General Jay Raymond, U.S. Space Command (SPACECOM) commander, played down IRGC commander’s boast of a “strategic achievement” and tweeted, “Iran states it has imaging capabilities — actually, it’s a tumbling webcam in space” that is unlikely to be providing anything resembling valuable intelligence. According to Iranian media reports, several new satellites meet the “final stages of preparation for launch,” including “Venus 2,” “Chapar 2,” and “Fares 1.”

On Nov. 26, Iran’s Supreme Space Council meeting, chaired by President Ibrahim Raisi, was attended by the ministers of defense, communications and information technology, foreign affairs, and industry. Iranian media emphasized the fact, in an apparent slap at the government of outgoing President Hassan Rouhani, that the last council meeting took place 11 years ago. President Raisi stressed that space programs should be accelerated and that “the space program can resolutely stand against Iran’s enemies.”

Issa Zare-Pur, communications and information technology minister, stressed the need to “accelerate the growth of the space industry” and said he was surprised by the president’s pressing timetable for placing a satellite in space in a geocentric orbit at an altitude of approximately 20 miles within four years. He said Iran is currently conducting experiments to move a satellite from an altitude of 250 miles to one of 6,200 miles. 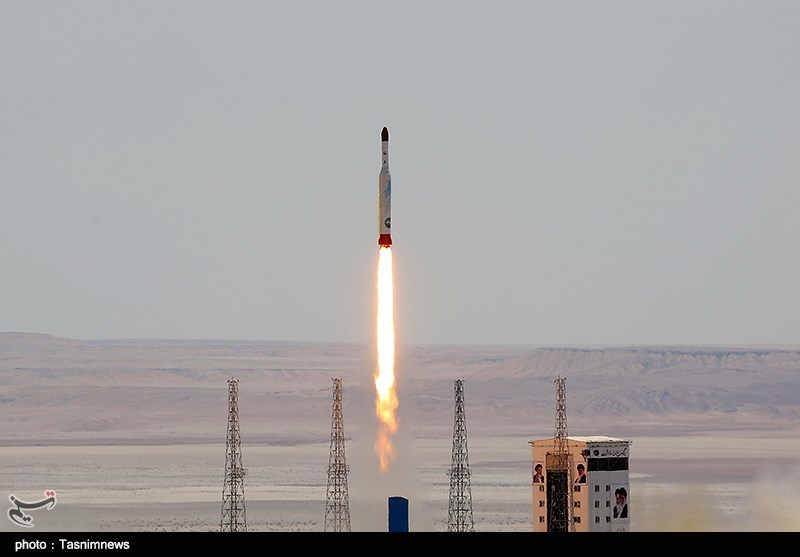 Iran has placed non-military satellites in space using a “Safir-2” SLV launch rocket, and in 2016 tested an updated, modified version of the “Simorgh” rocket, based on a North Korean “Taepodong” design. In 2017, Iran launched a low-earth orbit (LEO) observation satellite (such orbits are typically less than 620 miles above the surface of the Earth). An attempt to deploy an advanced-photography “Payam” satellite in January 2019 failed. In 2020, Iran was again unsuccessful in its launch of a “Zafar” satellite for environmental and agriculture monitoring (using the “Simorgh” rocket).

The Iranian Communications Ministry manages a civilian satellite program with the assistance of the country’s Defense Ministry. At the same time, the IRGC Aerospace Force has its own, independent space program. Minister Zare-Pur also called for a return to the approach used during President Mahmoud Ahmadinejad’s government, and to speed up space programs. 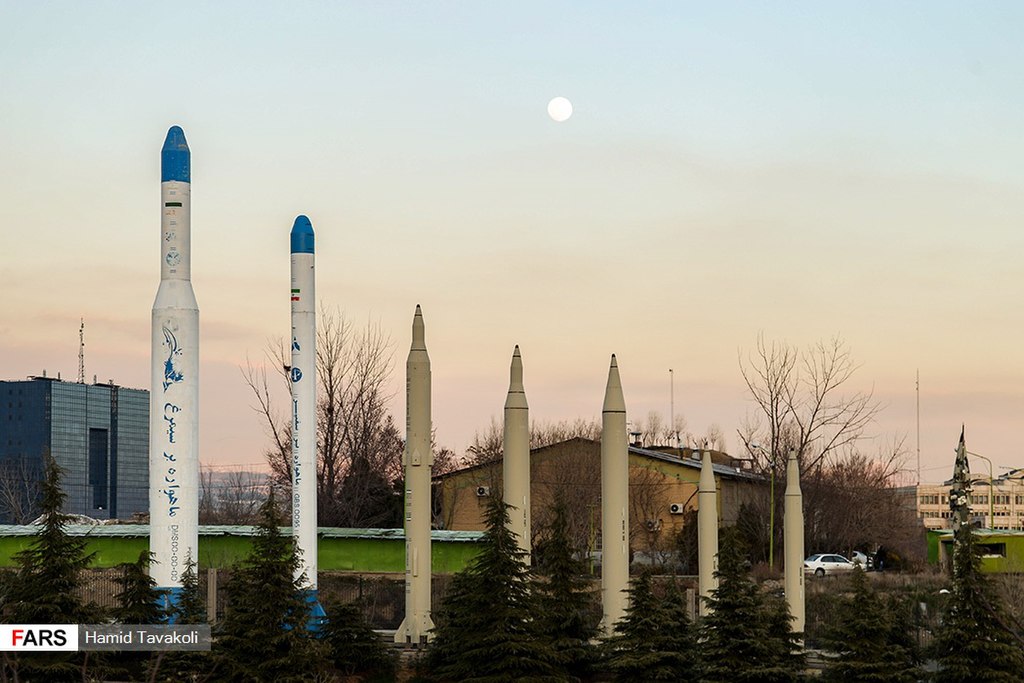 The United States considers Iran’s satellite launches a violation of United Nations Security Council Resolution 2231, which was approved in July 2015. According to the resolution, Iran was “called upon” not to take any action involving ballistic missiles “designed to be capable of delivering nuclear weapons.” Iran’s space programs, which were “dormant” under Rouhani, were accelerated as Iran’s response to the U.S. exit in 2018 from the 2015 Joint Comprehensive Plan of Action nuclear deal.

The issue of Iran’s ballistic missile launches was mentioned in the twelfth report of the U.N. Secretary-General (Dec. 8, 2021) to the Security Council on the implementation of 2231. Geraldine Byrne-Nason (Ireland), Security Council facilitator for the implementation of 2231, said France, Germany, Iran, Israel, the Russian Federation, United Kingdom and the United States had provided information to the secretary-general and the Security Council concerning a ballistic missile launch in May 2021 and two SLV tests in June 2021 by Iran.

The permanent representatives of Israel and the United States noted that the two SLVs incorporated technologies that were virtually identical to those used in ballistic missiles designed to be capable of carrying nuclear weapons. Byrne-Nason also said that the information circulated “reflects divergent views among those Member States as to whether those launches are inconsistent with paragraph 3 of resolution 2231 (2015).”

Iran, as usual, refuses to discuss any issue related to its ballistic missile program and threatens to leave if the issue comes up during the Vienna talks. During the recent discussion on the implementation of Resolution 2231, Majid Takht-Ravanchi, Iran’s ambassador to the United Nations, reiterated Iran’s stance: “Launches by Iran of ballistic missiles and space vehicles are completely outside of the purview of resolution, as developing a conventional missile program is an inherent right under international law. The current Vienna talks can succeed,” he affirmed, “not by setting artificial deadlines or introducing threats, unfounded accusations or disinformation campaigns, but only by engaging in negotiations with genuine political will and in good faith.”

IDF Lt. Col. (ret.) Michael Segall is a senior analyst at the Jerusalem Center for Public Affairs and at Acumen Risk Advisors.