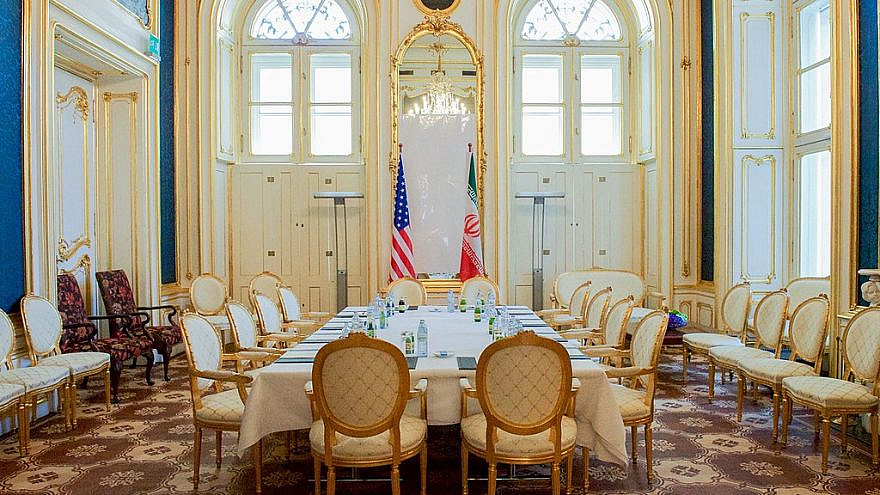 A room in the Blue Salon at the Palais Coburg Hotel in Vienna, the site of past and present nuclear negotiations, July 4, 2015. Credit: U.S. State Department.
Spread the word.
Help JNS grow!
Share now:

(December 14, 2021 / JNS) Senior European diplomats said on Monday that the Iran nuclear talks in Vienna may soon be rendered pointless, given the swift advance of Tehran’s nuclear program.

“As of this moment, we still have not been able to get down to real negotiations,” said British, French and German diplomats in a statement, reported Reuters.

The seventh round of negotiations between Iran and the other signatories to the 2015 Joint Comprehensive Plan of Action began on Nov. 29 but was suspended just days later. Diplomats representing the so-called E3 nations, France, Germany and the United Kingdom, warned earlier this month that Iran had walked back all compromises achieved in previous negotiations, while speeding up its nuclear program.

In their statement on Monday, the diplomats said that “time is running out.” Unless swift progress was made, they added, “In light of Iran’s fast-forwarding of its nuclear program, the JCPOA will very soon become an empty shell.”

The JCPOA, which the United States, Iran and other world powers entered into in 2015, sought to curtail Iran’s nuclear-weapons development in exchange for the lifting of economic sanctions.

In 2018, then-President Donald Trump abandoned the deal, which he described as “one-sided.” U.S. President Joe Biden has made it a foreign policy priority to restart the agreement.

A senior U.S. official said Iran has taken a hard-line position during the current round of negotiations and is demanding more concessions, Reuters reported.

“We are losing precious time dealing with new Iranian positions inconsistent with the JCPOA or that go beyond it,” the E3 diplomats said in the statement.

“This is frustrating because the outline of a comprehensive and fair agreement that removes all JCPOA-related sanctions, while addressing our non-proliferation concerns, is clearly visible—and has been so since last summer,” they added.