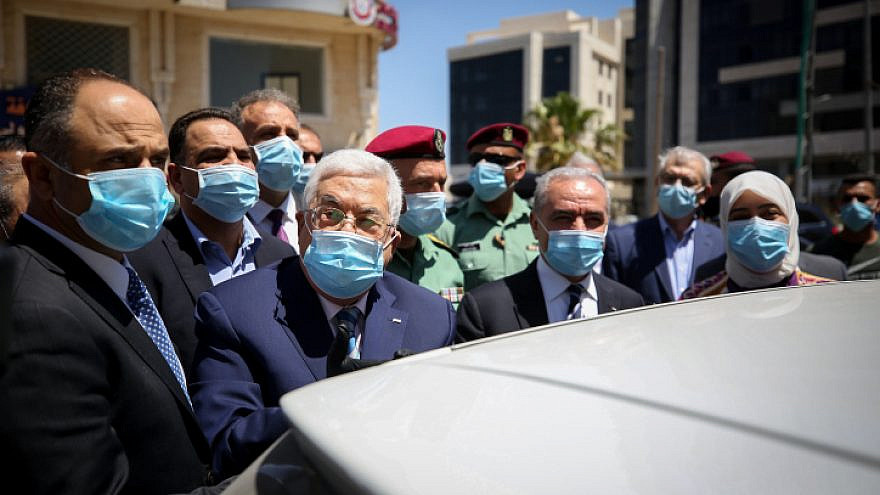 (April 14, 2021 / JNS) Should Palestinian elections go ahead in the territories, Fatah’s rule in the West Bank could be significantly jeopardized, an Israeli expert on the Palestinian arena has warned.

Michael Milshtein, head of the Palestinian Studies Forum at the Moshe Dayan Center for Middle Eastern and African Studies at Tel Aviv University, told JNS that the threat is clear not only to Israeli or American observers, but also to senior members of Fatah and the Palestinian Authority.

“A quick look at Fatah is sufficient to understand the scope of the danger and the chances of returning to the events of 2006 to 2007,” he said, when Hamas won a majority of seats in the Palestinian Legislative Council, before overthrowing Fatah in a violent coup in the Gaza Strip.”

Until 2018, Milshtein served as an adviser on Palestinian affairs in COGAT (the Coordinator of Government Activities in the Territories) and was previously also head of the Department for Palestinians Affairs in Israel Defense Forces Military Intelligence.

Fatah claimed that it had learned the lessons of 2006 and 2007, and promised that it would not repeat those mistakes, he noted, but those pledges don’t seem to be reflected in recent actions that have taken Palestinians on the path to new elections under deeply problematic circumstances.

“There is a very deep split in the movement—three central party lists have formed,” said Milshtein. One list is led by the longtime P.A. leader Mahmoud Abbas, now 85; a second by imprisoned senior Fatah terrorist Marwan Barghouti, 61, who is serving five life sentences in an Israeli prison for deadly terror attacks, together with Abbas opposition figure Nasser Al-Qidwa, who is in his late 60s; and a third is led by the youngest of the lot, United Arab Emirates-based Muhammad Dahlan, 59. who was ousted by Abbas from Fatah’s official ranks. An image of Palestinian terrorist Marwan Barghouti painted on the security fence near the West Bank village of Qalandia. Credit: Haytham Shtayeh/Flash90.

These candidates are running alongside “independent lists affiliated with Fatah, the most prominent of which is the list [former P.A. Prime Minister] Salam Fayad. The movement suffers from a highly negative public image in the West Bank and in Gaza. There is total ambiguity regarding its strategy and conceptual doctrine, and the general sense is that there is no leadership guiding the movement,” said Milshtein.

On the other side of the coin is Hamas, with internal cohesion and a party list that has some notables, named by Milshtein as including the former head of its internal security force Tawfiq Abu Naim, in his late 50s or early 60s; founding Hamas member Nizar Awadallah, in his early 50s; and senior Gazan Hamas official Khalil Al-Hayya, 60.

“If they go in this form to elections, there is a very high chance that Fatah will crash, which could mean that the Hamas precedent in Gaza would repeat itself in the West Bank, too. In a less pessimistic scenario, there is the possibility that Abbas will delay the elections, but the price of this maneuver could be public protests and a violent friction with Hamas,” said Milshtein. He recalled the “Algerian model”—a reference to the 1991 decision by the Algerian military to cancel the elections due to a victory by the Islamists, leading to the eruption of a bloody civil war.

What is causing Abbas to jeopardize his movement?

In a recent interview given to Israel’s Kan 11 news channel, outgoing Coordinator for Government Activities in the Territories Maj. Gen. Kamil Abu Rukun warned that Israel would cease its critical security coordination with the P.A. in the event that Hamas won the elections.

Rukun said that his warning had been passed on to P.A. decision-makers and that they were aware of the risk.

Asked what the possible scenarios are following a potential Hamas victory, Milshtein explained that in addition to the Algeria scenario, Abbas could alternatively decide that he “accepts the will of the people,” and as he did in 2006, “simply begin transferring government authority in a tangible manner to Hamas’s hands. If there won’t be someone in Fatah who stops him, the significance could be that Hamas begins consolidating its grip on power institutions, and afterwards, on security forces in the West Bank.” Hamas leaders in the Gaza Strip Ismail Haniya and Yahya Sinwar march during a protest in Gaza City on June 26, 2019. Photo by Hassan Jedi/Flash90

Already, Hamas has clarified that this is an option it is seriously considering, he said.

Many Palestinians as well as Israeli analysts are attempting to understand what is causing Abbas to jeopardize his rule and movement in this manner. “It seems that all of the answers are focused in the hands of one person, Abbas, who decided alone on the project and promoted it,” said Milshtein. “As in many events throughout his life, the strategic path is filled with mistakes, mishaps, a lack of clarity, a gap between the objectives he sought and what occurred in reality, and more.”

Milshtein assessed that Abbas placed the elections on the table as a means to gain the attention of the new Biden administration and focus it on the Palestinian arena and probably never meant to implement the elections in actuality.

“The move was designed to demonstrate an apparent positive front—someone who is promoting democracy—and to threaten Israel with the possibility of strategic upheavals,” he argued. “Abbas also wanted to be portrayed inside the Palestinian arena as someone who seeks to promote a deep internal fresh change out of the assumption that Hamas would be the one that would place conditions, and then he could accuse Hamas of being the ones who blocking the elections.”

He added in that regard, “Abbas was surprised when Hamas played along and agreed to all of his demands, thereby accelerating the elections process.”

All of this, said Milshtein, has led the Palestinian system to a process that Abbas and his circle—mainly, his close confidant and senior P.A. official, Hussein Al-Sheikh, and Majid Farah, head of the P.A.’s General Intelligence Service—are not interest in “since they understand how much strategic damage can be caused and the extent to which the P.A. is unready for such a test.”

The more that time passes, the harder it is to exit the elections process, he cautioned, since public expectations are growing, and there is rising preparations on the Palestinian street, as well as external pressure by the European Union and the United Nations for the process to go ahead.

“We haven’t yet reached the point of no return, but it is getting increasingly difficult from one day to the next, and Abbas would have to pay a price,” he said, for ditching the elections.

One ladder that Abbas could use to climb down from his predicament is to accuse Israel of refusing to allow the elections to occur in eastern Jerusalem, though Hamas is already preparing options for eastern Jerusalem Palestinians to vote outside of the city.

In the coming days, if Abbas declares that he is delaying or suspending elections, the result would likely be some international condemnation, a severe crisis with Hamas, and most likely, public protests. If he cancels them closer to May 22—the date of the Legislative Council votes—“all of the prices could be much higher, to the point of undermining the P.A.’s rule,” said Milshtein.

Israel, for its part, should maintain public silence on the manner, he said, while working with all of the elements that have a shared interest in canceling the elections: The U.S. administration, Egypt and Jordan.

Cairo has a singular ability to pressure Abbas. There are also senior P.A. officials who could help call off the elections, while Gulf states, particularly Saudi Arabia, which is deeply hostile to the Muslim Brotherhood (to which Hamas belongs) could be recruited to help Abbas exit the trap through the help of civilian assistance packages, offered Milshtein.

“It is very important to promote public messaging to the Arab, Palestinian and Western arenas, explaining that the principles of democratization are vital, but that under the current circumstances, strategic damage could be caused,” he said, “as well harm to the fabric of life of Palestinians, as occurred in the reality that unfolded in Gaza after 2006.”