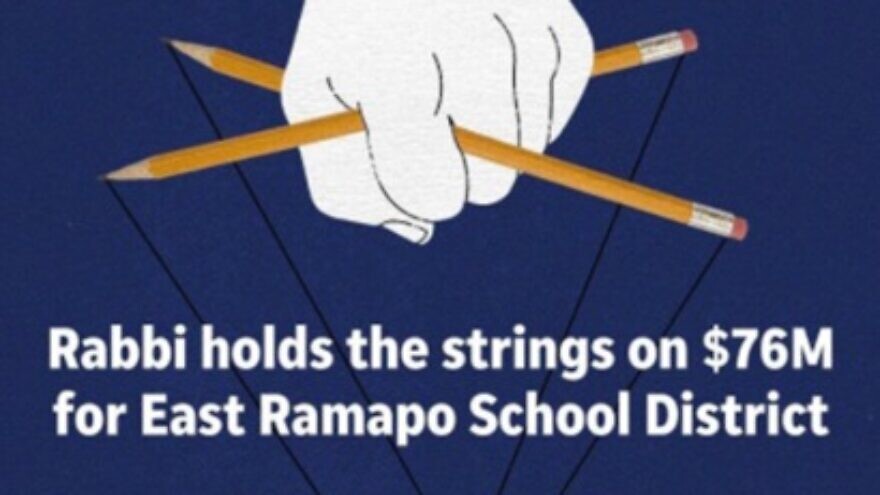 (February 11, 2022 / JNS) Three days after a social media post that many said was reminiscent of the worst anti-Semitic tropes, the editor at The Journal News and Lohud.com, which covers Rockland County, N.Y., has finally issued an apology.

“On Monday, we posted a promotional illustration on Lohud’s social-media channels whose words and imagery unintentionally featured an antisemitic trope. We’re deeply sorry this passed our review,” they wrote on social media Thursday morning, adding that “in the coming days, Lohud editors will engage in considerable outreach and listening with Jewish communities.”

The paper is part of the USA Today network.

Jewish groups had raised the alarm bells on Monday night after someone at the paper posted an ad on social media that read, “Rabbi holds the strings on $76M for East Ramapo School District.” The illustration on the ad showed a hand holding two pencils with strings attached and hooked onto people below. At the bottom was a pile of money.

Some 40,000 school-age children live in the East Ramapo School District, which includes heavily Orthodox Jewish neighborhoods such as Monsey. However, the overwhelming majority of them attend private schools, mostly religious schools. That has created tensions over the years as the number of students in private schools has continued to rise while the number of students in public schools has shrunk by an almost 3:1 margin.

Further, many of the district’s board members, who are elected to their posts, are members of the Orthodox community and not public-school parents.

The ad, which was removed shortly after it was posted, was intended to preview a story they planned to release on Wednesday. That article has since been postponed.

“This was a vile image it wouldn’t have been out of place in Der Stürmer,” a Nazi propaganda paper, said Ari Rosenblum, CEO of the Jewish Federation and Foundation of Rockland County who joined the organization after years of working on issues of anti-Semitism and anti-Zionism. “It brought to mind that image that [Brisith Labour Party leader] Jeremy Corbin was condemned for not calling out a few years ago. It was the concept that motivated the authors of The Protocols of the Elders of Zion. There is no circumstance under which this image should be used.”

Rosenblum said he would be happy to speak with the editors “to educate them on how unwise and frankly vile it was with the hope they can learn something from it and avoid publishing things like this in the future.”

The Anti-Defamation League New York/New Jersey region tweeted that the image “draws from the worst of millennia-old anti-Semitic tropes about Jews. At a time of rising anti-Semitism, this is not only irresponsible but dangerous. This image should never have been published.”

‘Actions are more than words’

Mary Dolan, the paper’s executive editor, issued a detailed statement on the Lohud website on Thursday, saying the ad was pulled “after a reader contacted us pointing out this hurtful choice of imagery. We apologize. Members of our team, including myself, did not recognize the stereotype that degrades and demeans Jews in the image and accompanying language. We’re deeply sorry this passed our review.”

She went on to say that “the illustration we removed had listed a publication date for the investigative story this week. Please know we have shifted that date as we review the story’s visual elements. The story focuses on the East Ramapo School District and raises questions about how officials have chosen to allocate millions of dollars in public funds to a nonprofit entity.

“In this case and in all our investigations, we are driven by our First Amendment duty to pursue matters of public interest and to hold leaders and institutions accountable through our reporting,” she continued. “ … we cannot and will not let this unfortunate incident distract us from providing the quality journalism meant to address issues serving our readers.”

Agudath Israel of America tweeted: “While we appreciate the apology, actions are more important than words. Agudath Israel hopes that Lohud takes this opportunity to communicate with our community and to make sure that the article in no way unfairly maligns the Orthodox community, as they have done in the past.”

The Orthodox Jewish Public Affairs Council also responded on a Twitter post: “There are many issues with the paper’s reporting of East Ramapo dating back a decade, and it continues until today. For example, a majority of the board members being Orthodox Jewish is mentioned as a ‘take over’ when no such language is used on elected Black or Latino officials. … Any time there is a fake or hyped scandal to report on East Ramapo, Lohud tends to mention the ethnicity of the majority board members and the voters who put them there. Is this standard when reporting about a policy challenge or scandal elsewhere in government?”

JNS reached out to editors at The Journal News, including Dolan, earlier in the week, but did not receive a response.