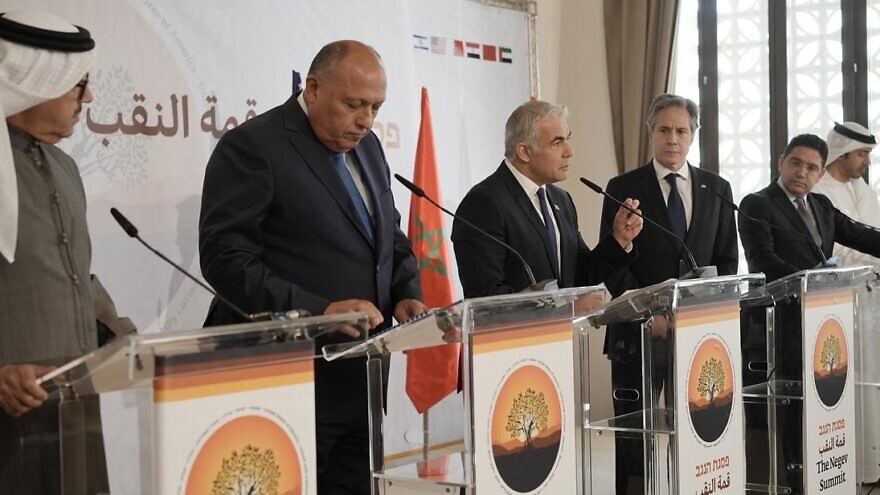 So successful was the summit that the ministers decided to make it a recurring event. “Last night, we decided to make the Negev Summit into a permanent forum. Together with our closest friends, the United States, we are today opening a door before all the peoples of the region,” said Lapid at a press conference on Monday.

Attending the summit were the foreign ministers of three of the four Arab countries that signed the Abraham Accords, along with Egypt, the first Arab country to make a peace deal with Israel in 1979. They included the UAE’s Abdullah bin Zayed Al Nahyan, Bahrain’s Abdullatif bin Rashid Al-Zayani, Morocco’s Nasser Bourita and Egypt’s Sameh Shoukry.

Several high-level figures at the summit told JNS that if someone had suggested such a gathering only a few years ago, the idea would have been dismissed as “wishful thinking,” a “dream” and a prediction more suited to the realm of “prophecy.”

Describing the Negev Summit as “definitely historic,” Israel’s Ambassador to the United States Michael Herzog told JNS that it “symbolizes the changes in our region—the fact that more and more countries are coming together. Behind it are deep geopolitical and socioeconomic crises in the region—the Iranian challenge for one, which faces all of us, and the desire to work together with the United States to counter all of these challenges.”

The top concern among Israel and the Arab states is the likelihood that an agreement to restore the 2015 Iranian nuclear agreement, or Joint Comprehensive Plan of Action (JCPOA), is in the offing. They oppose a return to the deal, warning it will economically revitalize an Iran weakened by tough sanctions and accomplish the reverse of its intended goal by making it easier for Iran to obtain a nuclear weapon. The Biden administration, however, supports reviving the deal, arguing that it’s the best way to put Iran’s nuclear program “back in the box.”

Blinken sought to assure U.S. allies during his trip, saying at the summit’s press conference that the United States will “confront common security challenges and threats, including those from Iran and its proxies.”

Despite the sharp differences on this key issue, Herzog said discussions over Iran were carried out in a “constructive way.” He said the ministers looked for means “to confront this danger and work together to see how we can address this security challenge.”

‘Something we are all united on’

Israeli Ambassador to the UAE Amir Hayek agreed, telling JNS: “There are some disagreements about Iran, but there is no disagreement about the need to see an Iran without nuclear weapons. This is something that we are all united on.”

However, it is clear that the key driver of the summit was unhappiness with America’s determination to bring back what the other summit participants considered a terrible deal.

As to the question of whether the current U.S. administration is fully behind the Abraham Accords—given reports that it was initially reluctant to even use such an evocative term for the agreements—Hayek told JNS that Biden’s team is on board: “They are fully committed. We are filling them in on each and every step. We are collaborating with them, and we are thankful for them and for the former administration, of course.”

Eitan Na’eh, Israel’s ambassador to Bahrain, commenting on the heartfelt speeches given by the Arab foreign ministers, who expressed their desire for a true peace with Israel—in the words of Moroccan Foreign Minister Nasser Bourita, “a paradigm-shaping” peace—told JNS that he was moved by the summit. “It’s really one of those moments that you call historical and defining in one’s lifetime, and I think in the lifetime of the Middle East,” he said.

Expressing the optimism that characterized the summit, Na’eh concluded: “This is the first one. There will be more. There is much work to do to bring the region together—to pull the countries that are present today closer together and those that may join us later, united by a common goal to make this region a better place.”