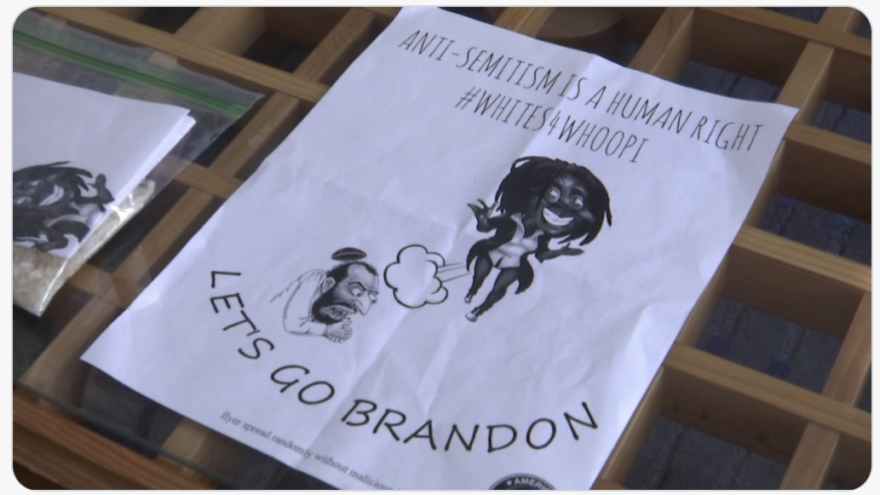 (February 21, 2022 / JNS) The Federal Bureau of Investigations and the police department in Colleyville, Texas, are investigating anti-Semitic fliers found on Saturday morning just weeks after an armed assailant held a rabbi and three congregants hostage at a local synagogue.

“We are aware of anti-Semitic and white-separatist materials distributed in clear sandwich bags to driveways around the city overnight. We have been in contact with the FBI and are investigating as a hate crime,” the Colleyville police said in a statement on Sunday.

On Jan. 15, a man entered Congregation Beth Israel in Colleyville and as services began, he pulled out a gun and held the synagogue’s leader, Rabbi Charlie Cytron-Walker and several congregants hostage for nearly 11 hours.

In a Twitter post, they noted that the fliers do not “appear to be targeting Colleyville. Fliers have shown up in San Francisco, Miami and Denver” and linked to a news story highlighting other recent anti-Semitic leafletting.

Over the past few months, Jew-haters have left anti-Semitic fliers on homes in California, Florida, Colorado and Texas. Many of these fliers seek to tie the coronavirus pandemic to Jewish individuals. Some have been distributed by supporters of the Goyim Defense League, a virulently anti-Semitic group.

A different set of written materials were discovered late last week in Fort Myers, Fla. Featuring a caricature of actress Whoopi Goldberg and a Jewish man along with the hashtag “whites4whoopi,” the fliers said “Anti-Semitism is a human right” and “Let’s Go Brandon,” a reference to a far-right movement opposed to President Joe Biden. The bottom of the flier said it was “spread randomly without malicious intent” and tagged by a group calling itself “America First.”

“It’s just what it says, it’s just awful, and to me, it reminds me of what happened in Nazi Germany,” Carolyn Gora, a member of the local Jewish community who found the fliers, told WINK news. “To say something like anti-Semitism is a human right? That’s disgusting.”