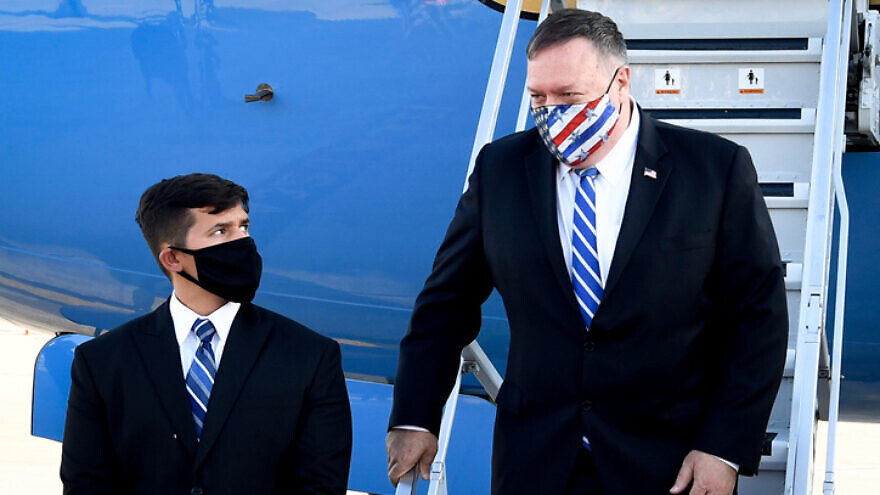 (August 24, 2020 / JNS) U.S. Secretary of State Mike Pompeo landed in Israel on Monday morning as part of a region-wide trip that includes visits to Sudan, Bahrain and the United Arab Emirates.

“Looking forward to speaking with leaders in [those countries] to discuss Iran’s malign influence and to celebrate the historic “Abraham Accord” between Israel and the UAE,” he tweeted on Sunday.

During his trip, Pompeo is scheduled to meet with Israeli Prime Minister Benjamin Netanyahu in Jerusalem “to discuss regional security issues related to Iran’s malicious influence, establishing and deepening Israel’s relationships in the region, as well as cooperation in protecting the U.S. and Israeli economies from malign investors,” said the U.S. State Department.

His visit to Jerusalem comes amid efforts by the UAE to secure the purchase from the U.S. of advanced F-35 stealth fighter jets, despite America’s long-standing guarantee that Israel maintain its qualitative military edge in the region.

In a first, Pompeo’s plane will then take off from Israel’s Ben-Gurion International Airport and fly directly to Khartoum—a flight path not normally permitted by the Sudanese. He is serving as a mediator in negotiations between Israel and Sudan on normalizing diplomatic relations between the two countries, according to Israel’s Channel 12 News.

Last week, Sudan’s Foreign Ministry spokesman was removed from his post for comments implying that Sudan was on the verge of following the UAE’s lead in normalizing ties with Israel.

While in Jerusalem, Pompeo is scheduled to deliver a speech via video conference to the Republican National Convention that kicks off on Monday and continues until Aug. 27. The move has been found troubling by Democrats, who say it breaches decades of protocol for political purposes.

Wendy Sherman, former U.S. Under Secretary of State for Political Affairs during the Obama administration, who led negotiations for the 2015 nuclear deal with Iran, called Pompeo’s decision to address the RNC “more than shameful.”

“Jerusalem should not be a prop in the Republican convention. Pompeo should not tarnish his office by this unprecedented action,” she said. “Secretaries of State, as far as I can find, have never appeared at a political convention. They, like the Secretary of Defense, have been above politics because they stand for America in the world.”

One source requesting anonymity told McClatchy, however, that “[Pompeo’s] lawyer, the State Department lawyers, RNC lawyers, White House lawyers have all worked on his appearance to make sure it is completely lawful and appropriate, including screening and approving all of his remarks. They have all signed off on this.