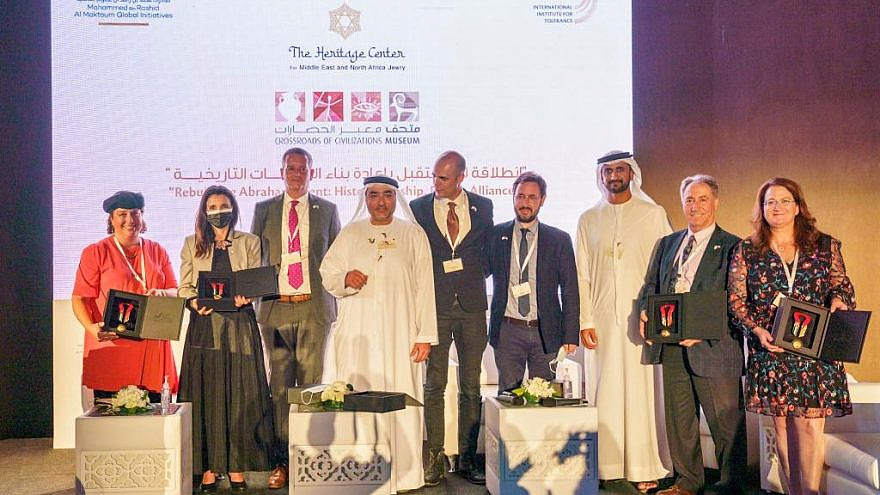 (December 11, 2020 / JNS) Amid the newly rebuilt “Abraham’s Tent,” Arabs and Mizrahi Jews joined together under one roof in Dubai—the most populous city in the United Arab Emirates—exploring the historic kinship of and future alliances between the two peoples.

At the Dec. 6 event at Dubai’s Crossroads of Civilizations Museum, participants discussed the impact of the Abraham Accords at the people-to-people level and utilized the history, culture and traditions of the Jews of the Middle East and North Africa (MENA) as a bridge to further alliances between Arabs and Jews.

Prior to the event, the museum held a photo exhibition of sites in former Jewish communities throughout these regions sponsored by the Azrieli Foundation, with images supplied by Diarna, the Geo-Museum of North African and Middle Eastern Jewish Life.

The event also marked the launch of an international center in Jerusalem that will chronicle the history and culture of MENA Jews, as well as the signing of a historic memorandum of understanding.

The Dubai Museum, the International Institute for Tolerance and the Heritage Center for Middle East and North Africa Jewry committed to teaching about what unites Jews and Arabs, becoming hubs of people-to-people cooperation and partnerships, and supporting preservation efforts of regional and archeological sites of importance to both Jews and Arabs.

Ashley Perry, CEO and chairman of the Heritage Center for Middle East and North Africa Jewry, praised the preservation efforts during a panel, saying, “in the Middle East and North Africa, we have countless Jewish sites without community, and in Israel, we have community without memorial or an official institution for the preservation of the history and culture of the Jews of MENA. We rectify both of these gaps by holding the first-ever event in the Arab world committed to remembering lost Jewish communities and the foundation of building a heritage center for MENA Jews in Jerusalem.”

Similarly, Rabbi Dr. Elie Abadie, senior rabbi of the Jewish Council of the United Arab Emirates, said the event “closed a circle” for him personally, having been born in Lebanon, where he was “raised with the Arabic language, Arab cuisine, Arab tradition, and hearing the muʾaddin [call to prayer],” yet having to leave Lebanon as a refugee because he was Jewish.

Now, Abadie told JNS, “I feel very welcomed, and again I am speaking Arabic, enjoying the local cuisine and hearing the muʾaddin anew. I feel like I have come home to my roots—to the region where I was born, to the language that I first spoke, and to the beautiful traditions and customs that I grew up with.” 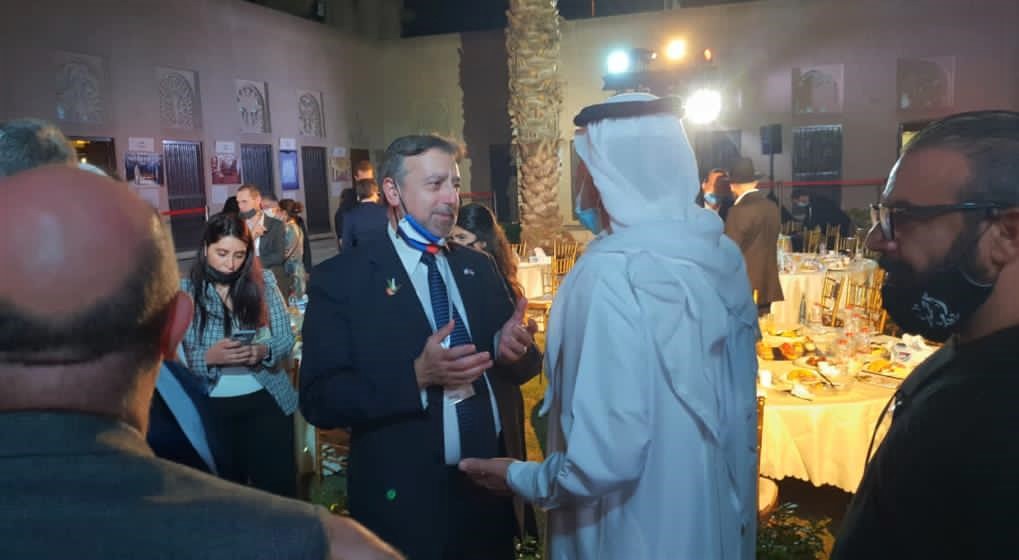 ‘A pathway to the future’

“This event represents a turning point in Arab-Jewish relations,” said Al Mansoori. “We are building on the Abraham Accords. The leaders of both countries have paved the way politically and diplomatically by signing the peace accord, and now it is our role, as people of both nations, to translate the peace agreement into tangible outcomes through connection, interactions, and promoting peace and tolerance in the region.”

Hassan-Nahoum called the accords “a family reunion of the children of Abraham to build a common future and destiny for our region. History is being made at this event, and on the eve of Hanukkah, we can bring light to the whole region. There is no better way of doing this than by reflecting and celebrating our common heritage and culture.”

“I am so proud that Mizrachi and Sefardi Jews are taking the lead in the pursuit of peace and normalization with the Gulf countries. … Now, more than ever, the stories of Jews from Arab lands should be told to the entire world from our eternal capital,” she told JNS.

Eran Teboul, chairman of the Heritage Center for Middle East and North Africa Jewry, said “in Israel, the majority of Jews have direct roots in the Arab world; many come from communities that lasted over 2,500 years. Sadly, while these communities no longer exist, their memory lives on in the language, culture and traditions of millions of Jews in Israel and around the world. These communities are a bridge to the past, but also a pathway to the future.”

“It was a meeting that built unprecedented ties and alliances between institutions that will deal with heritage, preservation and memory,” he said. “There were no past recriminations, only bridges being built to a brighter future of respect and tolerance.”