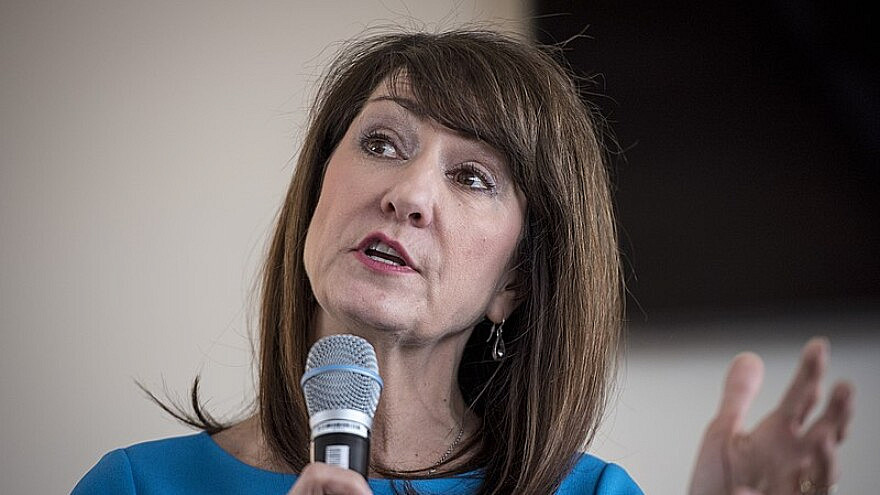 (June 28, 2022 / JNS) Tonight, Jewish political organizations will be closely watching the Democratic primary race in the newly drawn 6th Congressional District of Illinois as two incumbents with vastly different relationships with the Jewish community face off against each other.

Miles Coleman, associate editor of Professor Larry Sabato’s Sabato’s Crystal Ball at the University of Virginia Center for Politics, said that it was rare in a state with a Democratic governor and legislature to “double-bunk” two members of the same party to run against each other in a primary.

“When they draw the lines, oftentimes what happens is if it’s the same party that controls [redistricting], they’ll kind of sit each member of the delegation down, they’ll ask them, ‘OK, how good do you like us to draw your district?’” Coleman said. “And [Newman] apparently wasn’t being very cooperative with some of the legislative leaders and so maybe that’s how she got into the situation that she’s in now.”

Casten’s district formerly leaned Republican, with Casten beating Republican incumbent Rep. Peter Roskam in 2018. As a result, no matter whose previous district makes up more of the new district—which covers parts of Dupage and Cook counties—it is still more Democratic-leaning than their former district.

As a suburban district with a strong union presence, the areas incorporated from Newman’s old district are the ones where she struggled during her 2020 primary race against incumbent Rep. Dan Lipinski, which may benefit Casten, as Newman is seen as the more progressive of the two.

In this matchup, Jewish organizations are strongly favoring Casten, including the Democratic Majority for Israel (DMFI), the Jewish Democratic Council of America (JDCA) and even J Street, which is often on the opposite side of primary races from more traditional pro-Israel organizations.

Since winning against Lipinski, a moderate Democrat, Newman not only alienated Illinois Democrats with her 2020 primary challenge but also, according to DMFI PAC president Mark Mellman, ran as an anti-Israel candidate and amassed an anti-Israel record during her term.

Mellman pointed out that in fall 2021, Newman was one of only eight Democrats to vote against additional Iron Dome funding in the House of Representatives and has signed on to most pieces of anti-Israel legislation during her term in office.

J Street PAC endorsed Newman in her first race and even held a fundraiser for her after her vote against Iron Dome in October. But when faced with a choice between the two candidates, J Street PAC announced in February that it would endorse Casten.

What made Newman unpalatable even for J Street was the allegation that Newman bribed a potential 2020 primary opponent not to run against her.

According to an Office of Congressional Ethics investigation, evidence indicates that Newman promised local Palestinian-American professor and activist Iyman Chehade a position in her office as chief foreign policy advisor, district director or legislative director—making between $135,000 to $140,000 a year—if he did not run against her in the primary.

In late October 2021, the Office of Congressional Ethics transmitted a referral to the House Ethics Committee for further review after finding “substantial reason to believe that Rep. Newman may have promised federal employment to a primary opponent for the purpose of procuring political support.”

The committee subsequently opened an investigation into the incident, which is ongoing and could take years to complete.

A contract was allegedly signed in which Newman agreed to a list of anti-Israel demands from Chehade. The list had Newman commit to opposing any legislation that entails additional military sales or aid to Israel, oppose any legislation against BDS, oppose legislation that encourages Israeli construction of housing and other infrastructure on “occupied territory or on expropriated Palestinian or Syrian land” and support legislation calling for the release of Palestinian prisoners held in Israel. 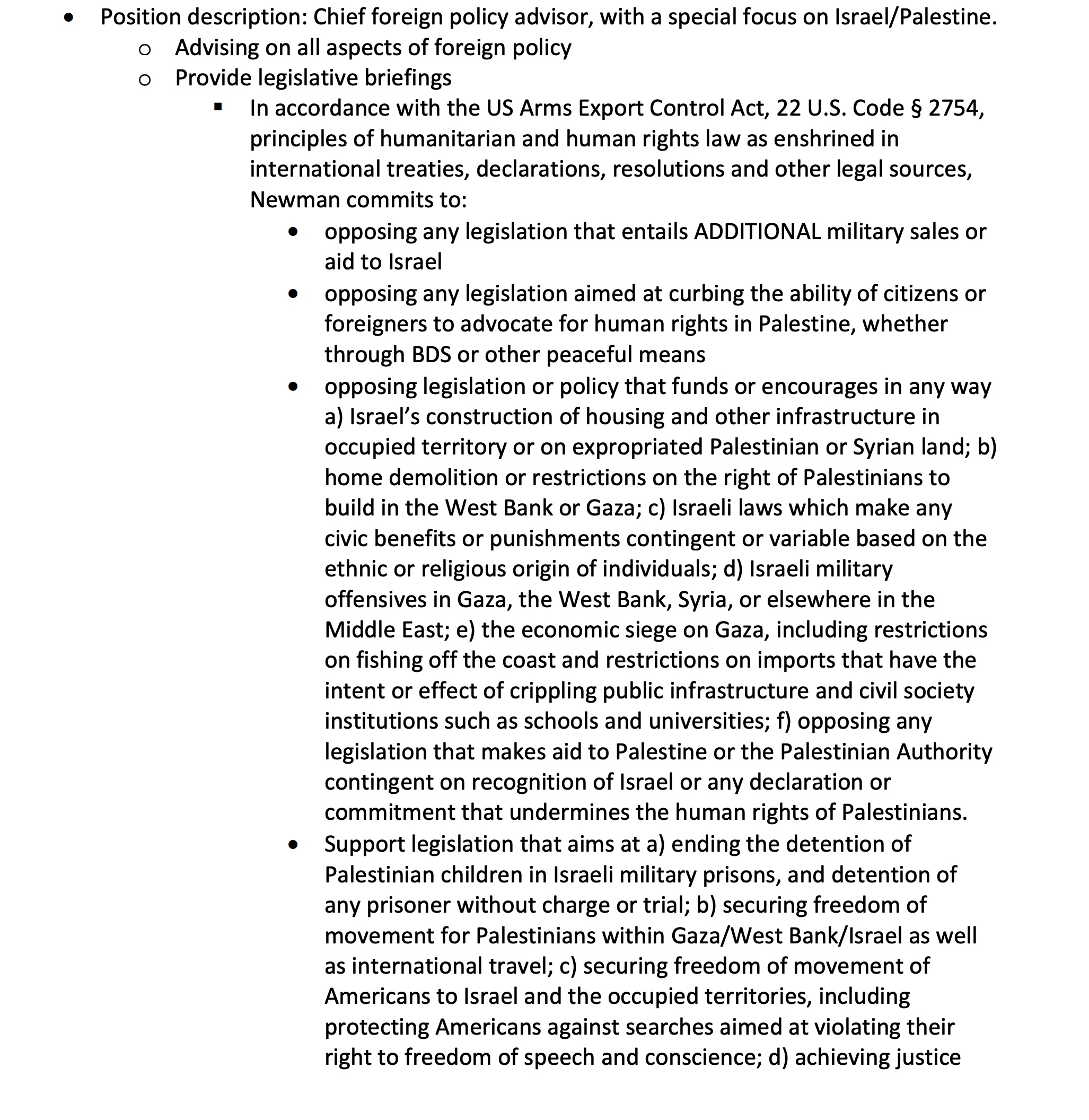 Chehade also wanted complete discretion over itineraries during visits to Israel and that there should be no requirement to meet with Israeli government officials, settler organizations, the Jewish National Fund or any organization that embraces Zionism or the “colonial project.” 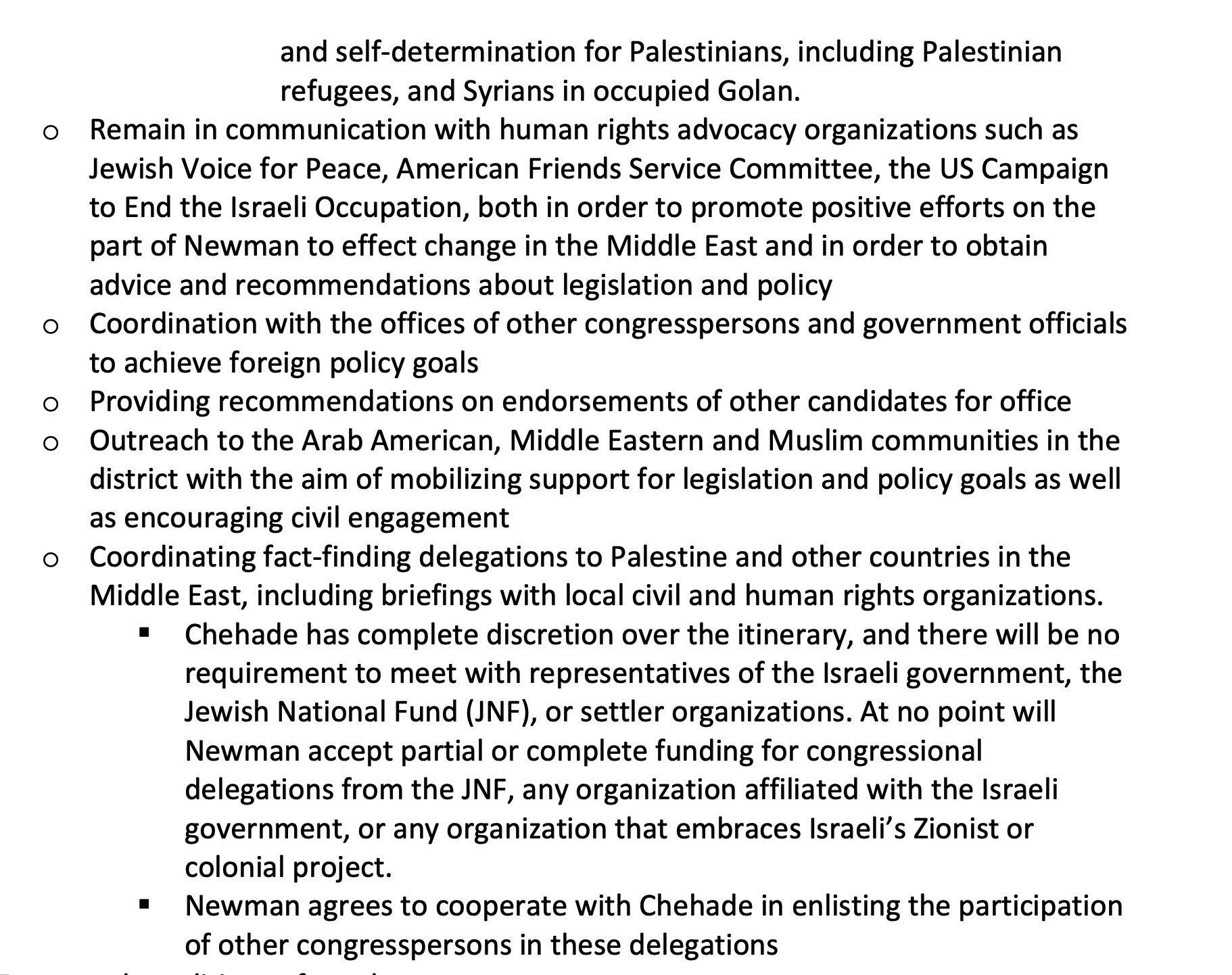 In a March 17, 2020 meeting after Newman won her primary, she informed Chehade that she would not hire him, leading to a lawsuit for breach of contract on Jan. 3, 2021 by Chehade. Newman and Chehade settled the case later that year and signed a non-disclosure agreement.

Chehade is now running in a competitive primary in Illinois’ 3rd Congressional District, where he is not considered a leading candidate, but his campaign website states that he is the director of foreign policy and research for Newman’s campaign.

Throughout the campaign, Casten has outpaced Newman in significant endorsements and raised twice as much as Newman. As of the last financial reporting deadline on June 8, Casten raised a total of $3.2 million compared to Newman’s $1.5 million.

Public polling from all but the most-watched House races are rare, but an internal poll conducted for Casten’s campaign between May 12-16 showed Casten leading with 36% to Newman’s 27%—with a margin of error of 4.9%—among likely Democratic primary voters.

Despite his lead, the campaign has not been easy for Casten. On June 15, he announced on social media that his 17-year-old daughter Gwen had died in her sleep due to currently unknown causes.

Whoever wins the race will go on to face one of five Republicans running for the GOP nomination in a district that’s rated “likely Democratic” by Sabato’s Crystal Ball.