Palestinian boys raise their hands at a school in the Gaza Strip supported by the United Nations Relief and Works Agency for Palestine Refugees in the Near East (UNRWA) in September 2011. Credit: U.N. Photo/Shareef Sarhan.
Republish this article
968 WORDS
Spread the word.
Help JNS grow!
Share now:

(September 6, 2019 / JNS) The recently published study “Israel, Jews and Peace in Palestinian Authority Teachers’ Guides” by Dr. Arnon Groiss of the Center for Near East Policy Research showed that Palestinian teachers’ guides promote an attitude towards the “other” based on delegitimization, demonization and war indoctrination instead of peace education.

Aimed to check the attitude of the Palestinian Authority curriculum to the Jewish-Israeli “other” within the ongoing conflict and to the possibility of solving that conflict peacefully, the study represents the final of four studies beginning in 2015, which examined 364 schoolbooks of all grades published between 2013 and 2018 in various subjects. The most recent study—the final of the series of four—was based on 89 Palestinian teachers’ guides published in 2016-18 in the Palestinian territories.

“While students’ textbooks reveal the components of a certain worldview and the values a society would wish to instill in the minds of its younger generations, teachers’ guides usually give us a hint as to how that is practically done,” notes the study.

“Language teachers’ guides in particular,” the study found, “were found imbibed with such repeating references, which makes them the main anti-peace indoctrination tool.” Teachers’ guides of national and Islamic education, as well as geography, sciences and mathematics, and, to a lesser extent, arts and crafts, contained fewer pieces of such material. Physical education teachers’ guides proved to be purely professional with no trace of political indoctrination. Most of the indoctrination was found in grades seven to 10, the age at which Groiss maintains students are “most receptive” to such education. 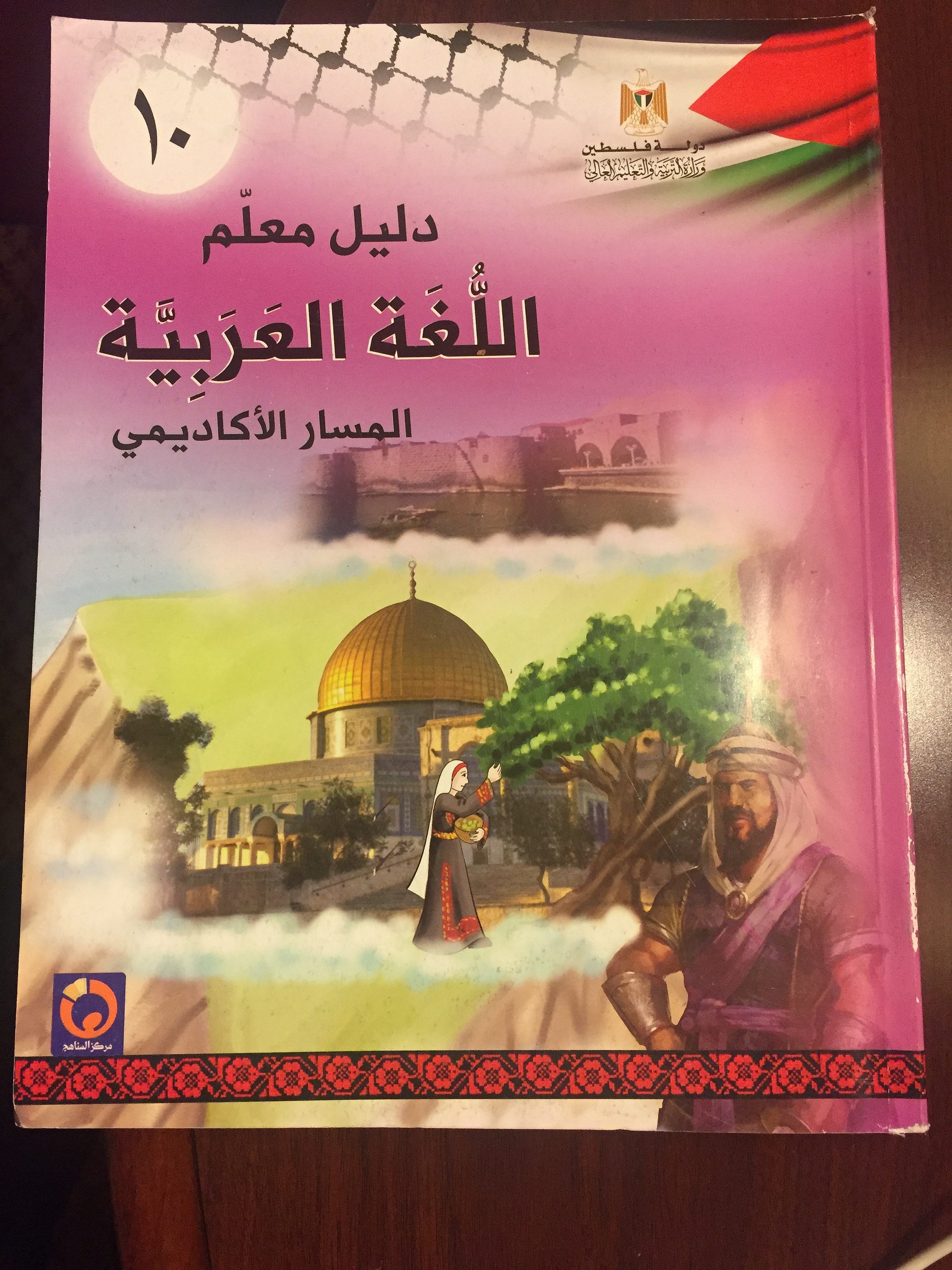 Photo of cover of Arabic teacher’s guide for grade 10 published in 2018. Credit: Center for Near East Policy Research.

According to Groiss, the method of repetition was the primary method in which values were transmitted, where teachers are taught to repeat points over and over again in various forms: statements, questions, answers and assignments.

“This is the indoctrination, in essence,” Groiss told JNS.

For example, Jewish “cowardice,” “slyness,” “deceit” and “greed” are repeated ideas in teachers’ guides used to define Jews as enemies of Islam and a corrupt nation, with stories of Jews falsifying money and calling aspirations regarding their ancient homeland “greedy ambitions.”

In the description of the relations of the Prophet of Islam and the Jewish inhabitants of the city of Medina in Arabia for eighth-grade Arab-language class, the teachers’ guide instructs: “The honorable Messenger was careful, from the beginning of the propagation of the Islamic religion, to keep close ties between the Muslims and the Jewish inhabitants of Medina although he was aware of the Jews’ deceitfulness and conspiracies.”

In a 2018 eighth-grade guide for Arabic, teachers are instructed to read a story called “My Grandfather’s Memories” and ask the students to “Find a free time to reflect on the dangers of the Jews’ greedy ambitions regarding Palestine.”

‘This is hate education’

In the same vein, material consistently describes a future where there will be an Arab removal of Israel with any surviving Israeli Jews exterminated.

In a poem taught to third-grade students, the following verse appears: “I will sacrifice my blood in order to water the nobles’ land and remove the usurper [Israel] from my country and exterminate the foreigners’ defeated remnants.”

A separate reference to the “disappearance” of Israel’s Jews is included in the Arabic Language teachers’ guide for seventh grade: “The Zionists are the terrorists of the modern age, and their fate is disappearance.”

But until then, the narrative in the teachers’ guides is that of an eternal victim. “No attempt is made to create a useful future for young Palestinians,” the study states. “Everything is tied to a fixed idea that the “other” is the source of their misfortune and, thus, that “other” should be eliminated.”

By referring to the conflict built on war, rather that peace and coexistence, and with delegitimization and demonization as its main pillars, the Palestinian educators impose on their students “a bleak future of hatred and misery, with no hope other than becoming a martyr in an endless struggle that is bound to bring pain and distress for years to come,” says the study.

The study calls the one-sided information manipulative and without self-criticism, preventing a healthy-thinking person that could contribute to the well-being of his or her own society. According to the study, “a whole generation is thus being lost.”

“This is hate education—a war of indoctrination against peace, in which the UNRWA agency has clearly been involved for the last 70 years,” said Groiss, urging that “the education itself has to change, and if UNRWA can’t change the approach, it should quit education.”

Reflecting on 20 years of researching this topic, he posed, “It’s too much to be aware of such hate directed at [all Israelis, including] me.”

Groiss voiced his hope that “everyone” reads this study, including UNRWA donor states and nations whose money is invested in the Palestinian Authority and educational system.

He places responsibility for this situation on the P.A., “shared to a great extent by non-Palestinian actors like UNRWA that uses in its schools educational material without the slightest effort to live up to the expressed U.N. goal of solving the Middle East conflict peacefully.”

“Instead of working towards the ending of the conflict,” Groiss states in the report, “UNRWA’s educational system and the donor states that sustain it contribute to its perpetuation. The protracted misery and distress of the Palestinian youth will remain their fault for long.”