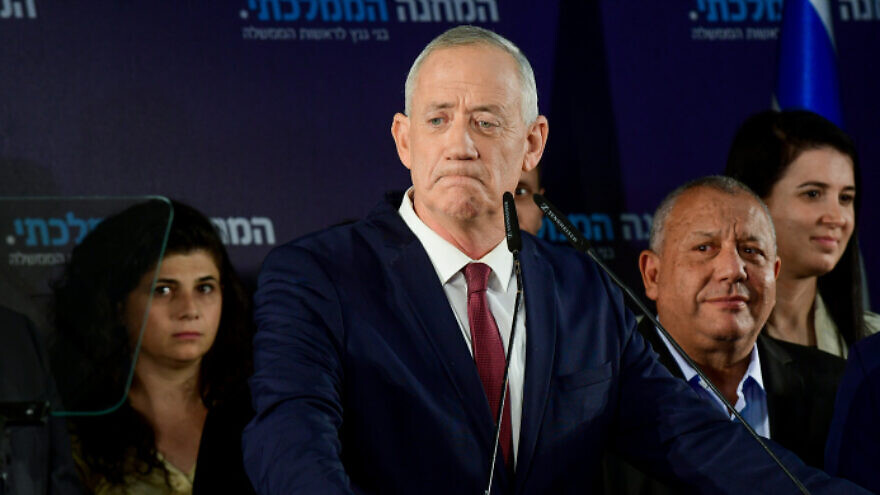 Israeli Defense Minister Benny Gantz, leader of the National Unity Party, speaks with supporters as the results of the Israeli elections are announced, in Tel Aviv, on Nov. 2, 2022. Photo by Avshalom Sassoni/Flash90.
Spread the word.
Help JNS grow!
Share now:

(November 2, 2022 / Israel Hayom) The headquarters of Israeli Defense Minister Benny Gantz’s National Unity Party was unusually quiet on Tuesday night, with almost no activists arriving as the unflattering results of the exit polls began to emerge.

The faction is expected to garner between 11 and 13 seats, a figure that led to disappointment not even headquarters employees could hide.

Addressing those present, Gantz lauded Israelis for “having gone out to vote despite it being the fifth election in under four years.” By doing so, he said, “They have shown that they care about Israel and the country is dear to them. That they see themselves as an inseparable part of the state and its future.”

National Unity was still waiting for the final election results, he said, and would continue with its mission, that “is broader than any bloc or camp and seeks to connect all parts of Israeli society.”

National Unity Knesset member Yehiel Tropper warned the right-wing not to celebrate early, saying the results were not yet final. He stressed that National Unity would not sit in a government with Benjamin Netanyahu, who is expected to become the next prime minister following what appears to be a sweeping victory. Fellow National Unity MK Pnina Tamano-Shata reiterated the same message.

Meanwhile, at the headquarters of the Yisrael Beytenu Party the exit poll results were received with mixed feelings, as the faction is expected to garner between four and five seats. They, too, noted that not all votes have been counted yet, and expected an increase in the number of mandates.