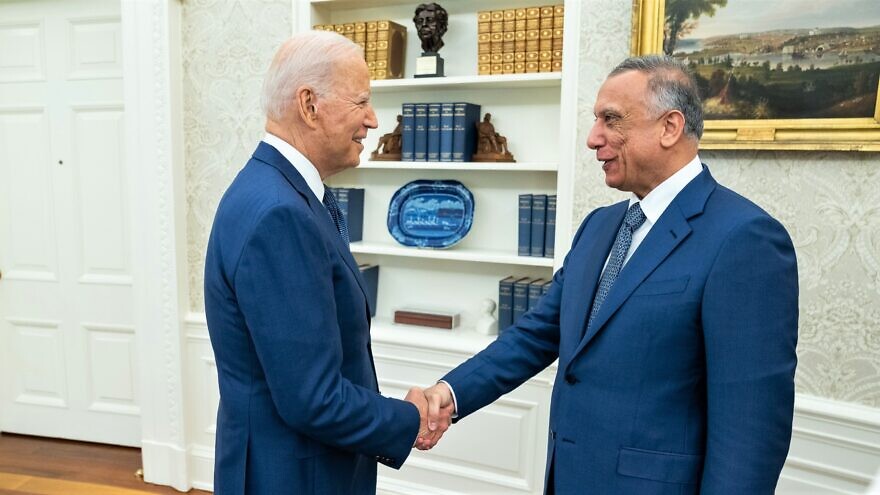 (November 8, 2021 / JNS) An Iranian-backed Shi’ite militia in Iraq was behind Sunday’s assassination attempt against Iraqi Prime Minister Mustafa Al-Khadimi, according to Iraqi security forces cited in a report by Reuters on Monday.

The report said that the drones and explosive warheads used in the attack were manufactured in Iran.

The attack targeted Al-Khadimi’s residence in Baghdad’s Green Zone. The prime minister escaped uninjured, though six of his guards reportedly sustained injuries in the drone attack.

Reuters added that Kadhimi appeared in video footage published by his office on Sunday “chairing a meeting with top security commanders to discuss the drone attack.”

“The cowardly terrorist attack that targeted the home of the prime minister last night with the aim of assassinating him is a serious targeting of the Iraqi state by criminal armed groups,” his office said in a statement.

Three drones were used in the attack, “including two that were downed by security forces while a third drone hit the residence,” said the report, citing Iraqi state media.

On Friday, clashes in Baghdad erupted between government forces and supporters of Iranian-backed political parties that performed poorly in parliamentary elections in October.

In a separate report, Reuters noted that “on Kadhimi’s watch, Iraqi security forces sought to rein in the Iran-backed groups which U.S. officials accuse of firing rockets at bases hosting U.S. personnel. But little was achieved on this front, and on the rare occasions Iraqi security forces detained members of these groups, they were soon released.”