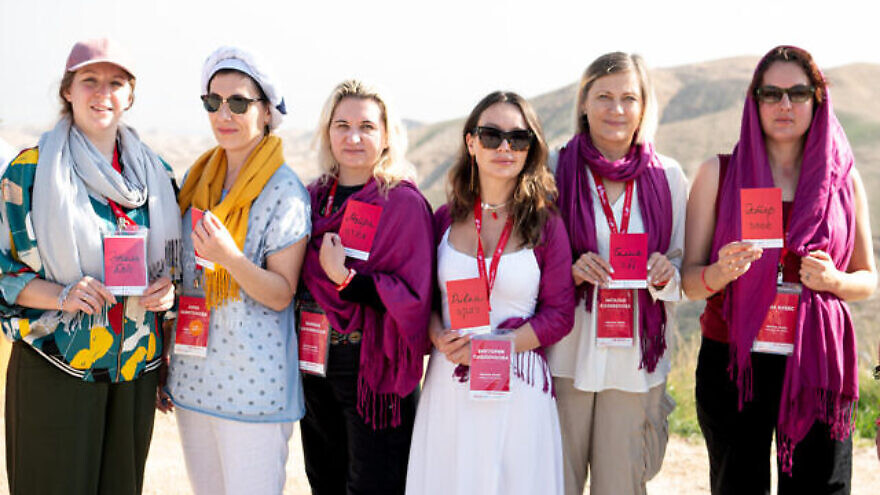 Women from the group pose with their newly selected ‘Jewish name’ on top of Masada in southern Israel. Photo by Aviram Valdman/Momentum.
Spread the word.
Help JNS grow!
Share now:

(December 14, 2022 / JNS) Momentum, a group for Jewish mothers, brought 200 women from Ukraine, Russia, the Baltic states and Germany for an eight-day journey to Israel this month. The trip, which ended on Dec. 6, was the group’s first since the outbreak of violence in Eastern Europe nearly a year ago.

The group, which helps Jewish women foster a connection to their heritage and the State of Israel, said this particular trip was logistically challenging, involving dozens of partner organizations in touch with women in high-risk combat zones and in areas where Zionist activity has been severely restricted.

“While most Jewish organizations have been hesitant to bring Russian and Ukrainian women on the same trip due to the tense political climate, Momentum chose to do the opposite and leveraged this challenge into an opportunity for Jewish unity,” the group said in a statement.

To avoid politics, participants were asked not to bring clothing or symbols that could elicit nationalist sentiment.

“We couldn’t imagine how we could possibly bring the Ukrainian and Russian groups together,” Momentum Founding Director Lori Palatnik said. “Courageously and with sensitivity, we did, and the women quickly found their commonality as Jewish mothers, striving for the same values, and united as part of a people. We did more for healing, peace and unity than any geopolitical summit. Women are key.”

The group toured Tel Aviv, Safad, Jerusalem and Masada. On Masada, the participants chose their own Jewish names.