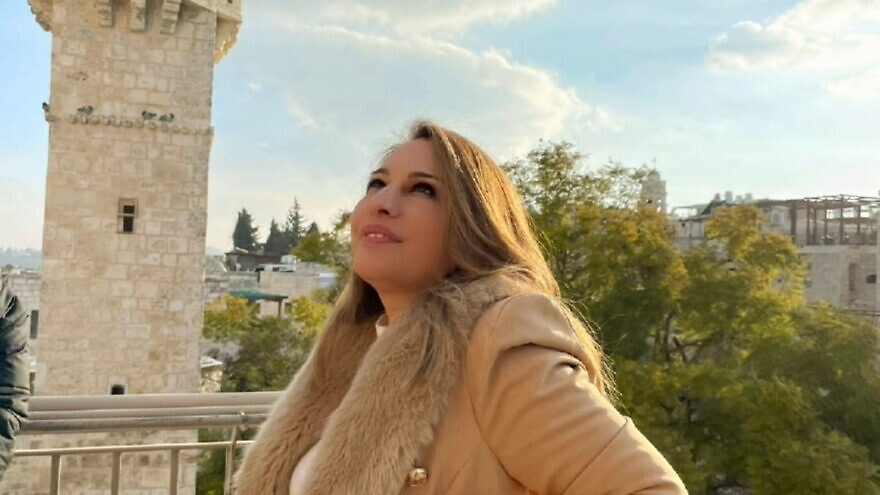 (February 13, 2022 / JNS) A Saudi Arabian professor who now lives in Dubai has told JNS that peace between Israel and Saudi Arabia “will happen” but that it could take more time.

“If you ask me, logically and rationally, it will happen,” Dr. Najat AlSaied said. “But Saudi Arabia is complicated and peace may take some time.”

She noted that while Israel and Saudi Arabia share a common enemy in Iran, security is not the only consideration for a country like Saudi Arabia, which she said represents the Islamic and Arab world as the home of Mecca and Medina.

Nonetheless, AlSaied said that peace could happen and, if it did, “it would bring peace between Israel and the entire Muslim world.”

AlSaied was in Israel from Sunday to Friday last week, during the same period that several top Israeli officials visited the United Arab Emirates (UAE) and Emirati parliamentarians met with colleagues at the Knesset. She said that the recent surge in visits by Israel and Emirati officials to each other’s countries were meant to send a message: Peace is stronger than hate and violence.

She told JNS that the recent visits to the United Arab Emirates (UAE) by Israeli President Isaac Herzog, Tourism Minister Yoel Razvozov and police chief Yaakov Shabtai were timed to the tensions simmering in the region.

A drone attack by the pro-Iranian Houthi rebels on a fuel depot in Abu Dhabi on Jan. 17 killed three civilians. It was followed up by at least two more missile attacks, both intercepted, including one during Herzog’s trip.

“They [the Houthis] don’t want to see this kind of peace and normalization between Israel and the Gulf,” AlSaeed said of the Abraham Accords, which were signed in September 2020. “But when the Israelis are coming despite these missile attacks, Israel and the Gulf are saying, ‘Do whatever you want to do, the peace will not evaporate and fail because of your silly, immature actions.’”

She called the visits by the officials “symbols of peace” and said that when there is a warm, people-to-people peace, the Iranians and their proxies use it for hegemonic purposes—as a reason to show their force to the Arab public.

“They don’t want to resolve the conflict, they want to use it” to spread hate, AlSaied said.

AlSaied was in Israel through her role as the academic and media consultant for the NGO Sharaka, which means “partnership” in English. The organization was founded by young leaders from Israel, the UAE and Bahrain in the aftermath of the accords, to help turn the vision of people-to-people peace into reality.

She is also a columnist for several Arabic-language publications and for the Israeli newspaper Israel Hayom. 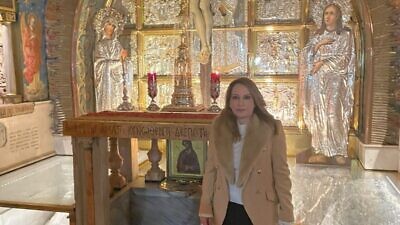 Dr. Najat AlSaied in the Church of the Holy Sepulchre, Jerusalem. Credit: Courtesy.

AlSaied told JNS that her days in Israel were packed from “early morning until late at night” meeting the people she had connected with via online webinars and other virtual activities in the last 18 months. This was her first trip to the country. She had tried coming to Israel six earlier times, she said, but each trip was canceled for one reason or another, from the Israeli elections to COVID-19 and even the weather.

She met with representatives of the Government Press Office in Jerusalem, where she spoke about women in journalism, schmoozed with professors at Hebrew University and the Open University and held meetings with her contacts in the Foreign Ministry—in addition to visiting friends from various sectors.

“I am just so glad I made it here after building all of these contacts,” she said.

AlSaied noted that she easily clicks with Israelis, whom she believes share a lot culturally with her people.

“I thought when I would arrive, I would see like a mini-New York,” AlSaied told JNS. “But my expectations were wrong: Israel is like a part of the Arab world, more Middle Eastern than Western.”

What was her favorite part of her experience in the Holy Land? The Old City of Jerusalem, she said.

AlSaied walked around between the various quarters—Arab, Christian, Armenian and Jewish—and said she was struck by the mosques, churches and synagogues all situated in close proximity to one another and coexisting, at least most of the time.

“I saw the Abraham Accords embodied in front of my face,” she said. “It was amazing. This is something that will always be captured in my mind.”