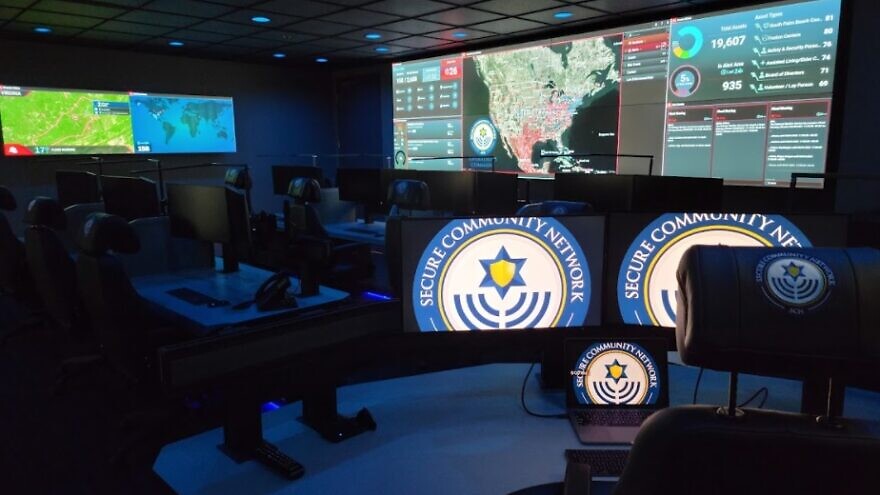 (September 27, 2021 / JNS) A state-of-the-art security command center was unveiled this week by the Secure Community Network (SCN) to ensure that the Jewish community is prepared in the event of any violence or threats.

Dubbed the National Jewish Security Operations Command Center, JSOCC, was built with funding by private donors and gives the SCN—the security arm of the Jewish Federations of North America and the Conference of Presidents of Major American Jewish Organizations—a high-tech, centralized location where its intelligence analysts and security professionals can monitor and track threats to the Jewish community and coordinate response with its partners, including local, state and federal law enforcement.

“The JSOCC will enhance our ability to provide greater protection and improved response time more effectively and efficiently, moving us into a more proactive position to address security concerns and threats with key partners from law enforcement to Jewish communities,” Michael Masters, national director and CEO of SCN, told JNS.

According to Masters, the command center, which is located in Chicago, will be staffed 16 hours a day but can be increased to 24 hours a day if needed. It includes a 16-foot video wall to allow for “optimal incident track and response,” as well as individual workstations. JSOCC can seat eight people with an overflow capacity to accommodate additional staff in the event of a major incident.

It is, he said, “a significant step forward in protecting our people.”

“We are in the most complex and dynamic threat environment we have seen. In many years, recent data from the FBI and DHS, along with our own assessment and that of partners like the ADL [Anti-Defamation League] confirms this,” he said. “This past week, the FBI director [Christopher Wray] testified that the number of domestic terrorism cases doubled in the last year—roughly three cases a day are being opened.”

According to SCN, it saw a 125 percent increase in reporting of incidents and issues related to the Jewish community in 2020.

That heightened trend appears to be continuing into 2021.

As a result of Israel’s 11-day conflict with Hamas in Gaza in May, the ADL recorded a 98 percent increase in online anti-Semitism and related threats spiked by as much as 75 percent in cities across the United States.

“While we are currently unaware of any specific attack planning, we constantly monitor the desire of many of our adversaries, domestic and international, to inflict harm and terrorize our community,” he stated. “The JSOCC is enhancing our ability to do this more effectively and efficiently moving into a more proactive position.”