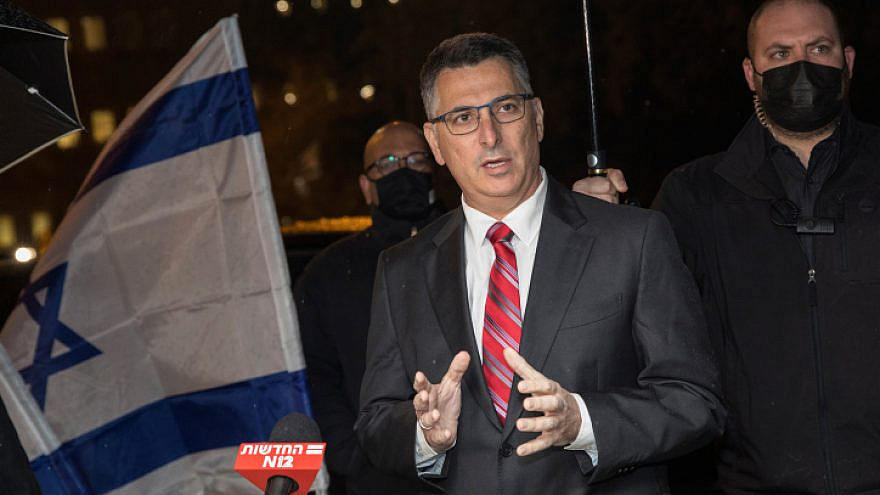 (February 11, 2021 / JNS) For the fourth time in two years, Israel will go to elections on March 23 to elect its 24th Knesset. While early polling points to a similar inconclusive fate with the previous three, there have been some notable changes in this election cycle that could lead to a different outcome.

One of them is the emergence of Gideon Sa’ar.

Sa’ar, 54, a former member of Likud, now heads the New Hope party, which he hopes will win the majority of votes in the upcoming election, giving him a chance to cobble together a coalition and perhaps even become Israel’s next prime minister.

In an online public interview with Robert Satloff of the Washington Institute for Near East Policy, Sa’ar spelled out his vision for Israel, and why he believes he can and should get Israel’s top job.

Asked why he is running for the position, Sa’ar explained that Israel is currently undergoing a period of extreme instability. “We must work today to restore stability and bring unity to our nation,” he said. “This is my mission.”

Sa’ar blamed Israeli Prime Minister Benjamin Netanyahu for the current state of instability saying, “unfortunately, he preferred his interests over the good of the country. … Therefore, we need to create a change in Israel. This is what I am trying to do now.”

Sa’ar said he is “a proud Jew and a proud Zionist” who has dedicated his life for Israel, and is “a loyal student of [Theodor] Herzl and [Ze’ev] Jabotinsky,” two political activists who laid the early foundations for the State of Israel.

Indeed, Sa’ar, who was born and raised in Tel Aviv, was part of the nationalist Yehiya movement as a teenager, which opposed the evacuation of Israeli settlements in the Sinai Peninsula as part of Israel’s peace agreement with Egypt. He later became a political reporter, then an aide to the attorney general before entering politics in the late 1990s. During Netanyahu’s first term as prime minister in 1999, he made Sa’ar a cabinet secretary.

After Likud returned to power in 2001, he was reappointed to the same position by former Prime Minister Ariel Sharon. In 2003, Sa’ar was elected to the Knesset, later strongly opposing Sharon’s evacuation plan from the Gaza Strip in 2005, where he was one of the leading opposition voices and voted against it in the Knesset.

When Netanyahu returned to power in 2009, Sa’ar served as education minister and interior minister before resigning from Knesset in 2014. He rejoined Likud in 2019 before leaving to start his new party before the current election.

In the previous election cycles, Netanyahu’s main challenge came from the center-left Blue and White Party headed by current Defense Minister Benny Gantz. However, after the March 2020 election, Blue and White broke apart when Gantz joined Netanyahu in a national unity government, while his former partner, Yair Lapid of Yesh Atid, headed into the opposition.

But with Sa’ar, Netanyahu faces a different challenge. Cut from the same ideological cloth as the Israeli leader, Sa’ar runs to the right of Netanyahu on some policies, including his views on regional security, the Israeli-Palestinian conflict and settlements.

As such, while Netanyahu could make a clear case against his left-wing opponents in the previous election cycles, with Sa’ar he faces an opponent who’s more focused on Netanyahu’s conduct as prime minister, including criticizing the long-time Israeli leader on his corruption trial and haphazard management of the coronavirus pandemic—formidable at first, and then floundering a bit.

In the latest poll conducted by Kan News on Feb. 9, Sa’ar’s party would come in third place behind Likud and Yesh Atid. While Sa’ar has ruled out sitting in a government with Netanyahu, who would be a natural right-wing partner for him, the large ideological differences between his party and other challengers to Netanyahu would make any type of anti-Netanyahu coalition government very unstable. Indeed, this has been the issue in the previous three election cycles, as the opposing camp has been unable to assemble a government without Likud.

Sa’ar noted such in his discussion with Satloff, focusing on the domestic challenges Israel faces and its dysfunctional political system. He said that his policies are different from the current government since he believes the main challenges today are domestic, “and unfortunately, no one is dealing with them right now,” he said.

Referring to the obvious problem of having four elections in two years, Sa’ar said “it is extremely important to unite the country and break the cycle of ongoing election campaigns.”

Asked how he would achieve unity, Sa’ar replied that he “will have to work hard in order to bridge differences between different people and parties,” and that “because the things we must take care of, such as jobs and the economy, are not in ideological dispute among the different parties, it is possible to bridge the gaps.”

Palestinians ‘not willing to solve crisis with us’

Turning to Israel’s policy with regard to the Palestinians and how Israel would relate to Washington under his direction, Sa’ar said his rationale “follows the experience” Israel had in the last three decades of attempts to solve the conflict with “two states for two peoples” as the central component.

Sa’ar noted that former Israeli Prime Ministers Ehud Barak and Ehud Olmert both made “very generous” offers, but the Palestinians “never accepted them and made it clear they are not willing to solve this crisis with us,” he said.

“I support maximum autonomy for Palestinians to rule their life with minimum ability to harm the security of the State of Israel,” he said, adding that “we must have a sincere dialogue to see what is possible to achieve.”

Sa’ar also noted that during former President Barack Obama’s two terms, the Palestinians “did not take advantage of the fact they had a president who was sympathetic to their cause.”

The reality that “there were no effective negotiations” between Israel and the Palestinian Authority during that period demonstrated “the real motivation of the Palestinians,” he noted.

Sa’ar said he believes that these days, the international community and both American political parties “are much more realistic on what we can achieve on the ground in the short term.”

Last year, Israel and the Trump administration floated the idea of applying Israeli law to Jewish areas in Judea and Samaria, but instead chose to move forward with normalization with the United Arab Emirates, Bahrain, Sudan and Morocco.

“I will not deny I support the idea of implementing the law over communities in Judea and Samaria,” said Sa’ar. “It continues to be an Israeli objective.”

He clarified, however, that he would “respect a commitment” that was given by any Israeli prime minister to an American administration, and if that means not applying sovereignty now, “that is the reality,” he said.

He said he “would like to promote and try together with the new administration in Washington to work on adding more states to the normalization process with Israel. The idea of peace between Israel and Arabs in the region, including the Palestinians, will be constructive.”

‘A regional consensus’ on Iran

Turning his attention to Iran, Sa’ar said the United States and Israel share a common goal and common interest in not allowing Iran to possess nuclear weapons.

“We might have differences on how to achieve that goal,” he said, “but the best thing is to speak directly on the issue. It is not just an Israeli consensus. It is a regional consensus.”

At the same time, he noted Iran’s failure to adhere even to the spirit of the 2015 nuclear deal by “spreading terror in the region and developing its missile program.”

Sa’ar said he was hopeful that “these facts will be considered in Washington.”

“Most important,” he said, “is we must stand for our national interests—and we will.”