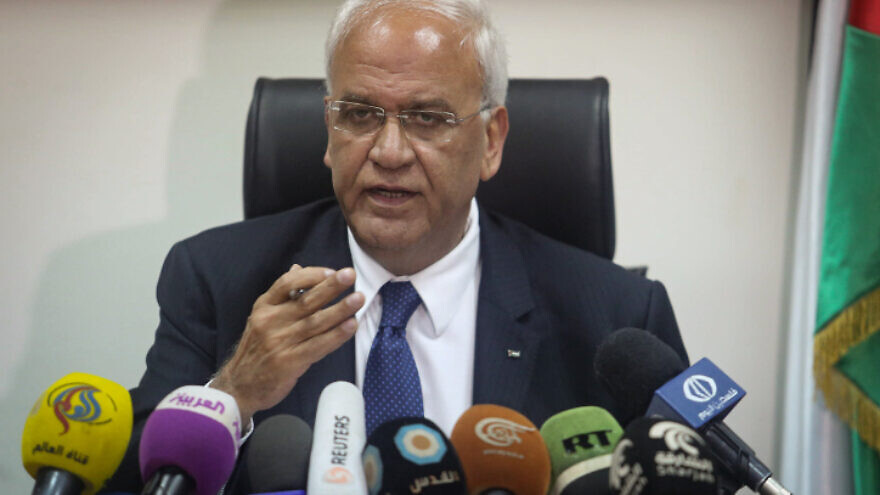 (June 3, 2020 / MEMRI) The Palestinians’ only option now is to “entirely reject” the U.S. peace plan and sever relations with the United States and Israel, according to PLO Secretary General Saeb Erekat.

Speaking during a May 30 interview on Russia Today, Erekat said that the U.S. “Peace to Prosperity” plan was “the most biased plan in the political history of the effort to resolve the Palestinian-Israeli conflict. This is the most biased, blind, extreme and racist plan.”

Faced with such a plan, said the Palestinian official, “We have no option but to reject it completely, and to sever all our ties with the Israelis and the Americans.”

The PLO had not been established to improve Palestinians’ living conditions, said Erekat, but to “restore a sovereign Palestine, with East Jerusalem as its capital.” This, he added, was the “Palestinian birth.”

Arab governments that cooperate with Israeli Prime Minister Benjamin Netanyahu, whom Erekat called a “war criminal,” are stabbing the Palestinians in the back, said Erekat.

“I have met Kushner 37 times. He is a blend of ignorance and arrogance. This is the truth,” he said. “The fact that this ideologue, who is one of the biggest donors for the settlements, him and [U.S. envoy David] Friedman, the ‘biblical ambassador,’ who was the head of the guards at the Beit El settlement, or [Trump adviser] Jason Greenblatt, whose children are studying in a Gush Etzion settlement—these are the people that get to decide the future and fate of the region?”