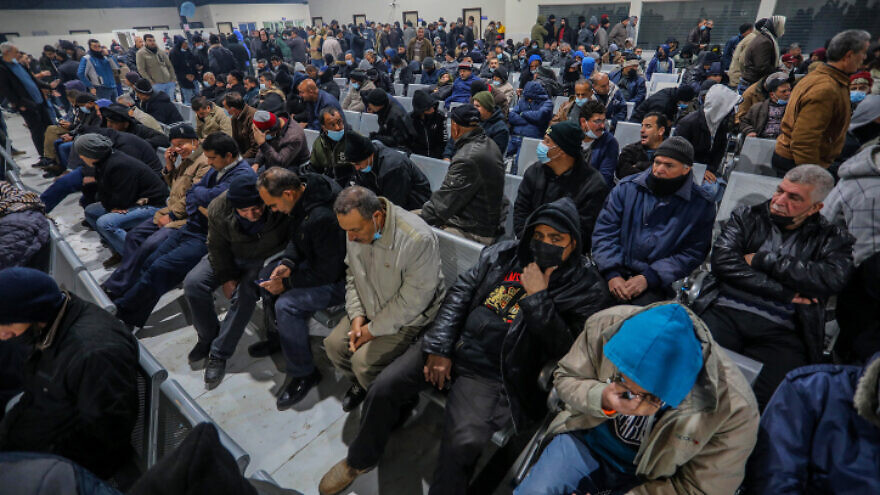 Palestinian workers at the Erez border crossing in Beit Hanun in the northern Gaza Strip as they wait to enter Israel for work on March 13, 2022. Photo by Attia Muhammed/Flash90.
Spread the word.
Help JNS grow!
Share now:

(December 8, 2022 / JNS) The Israel Security Agency (Shin Bet) announced on Thursday the arrest of a Gaza resident on suspicion of gathering intelligence for Hamas.

The suspect, who has an Israeli work permit, used his status as a trader to enter the Jewish state and conduct reconnaissance, according to the intelligence agency.

He was identified by the Shin Bet as Tzabar Abu Ta’abat, 28, of Dir al-Balah in central Gaza, and was apprehended in November of this year. He has since yielded a wealth of information about Hamas’s terrorist activities, according to the Shin Bet.

According to the investigation, he was activated by Hamas elements in order to, among other things, expose the identities of Shin Bet agents and acquire information on specific sites in Israel. The intelligence agency said his interrogation had revealed the identities of Hamas operatives as well as the locations of tunnels, weapons storage facilities and other military sites used by Hamas in the Gaza Strip.

Abu Ta’abat also passed on information to his handlers in Gaza while fully aware of the significance of his actions, according to the Shin Bet.

Prosecutors from the Southern District charged him with serious security violations on Thursday.

On Nov. 24, the Shin Bet announced that it had foiled a bus-bombing plot.

The would-be bomber, a Gazan with a work permit in Israel, had intended to detonate an explosive device aboard a bus in southern Israel, according to the agency.

The suspect, identified as Fathi Ziad Zakut, 31, of Rafah, was also charged with severe security offenses on Thursday.

Zakut was allegedly recruited by Palestinian Islamic Jihad, and received training in handling explosives from a Gazan bomb-making expert. Radical publications were also found in his possession.

On Saturday, the IDF struck a Hamas military post after terrorists in the Gaza Strip fired on an Israeli fighter jet. Hamas said that it had fired anti-aircraft and surface-to-air missiles at the Israeli jets conducting reprisal strikes in Gaza.

Earlier on Saturday, the IDF struck a Hamas tunnel and one of the terrorist group’s “central” rocket manufacturing sites, in response to a rocket that was launched into Israel from Gaza. The rocket landed in an unpopulated area, causing no damage, according to the IDF.