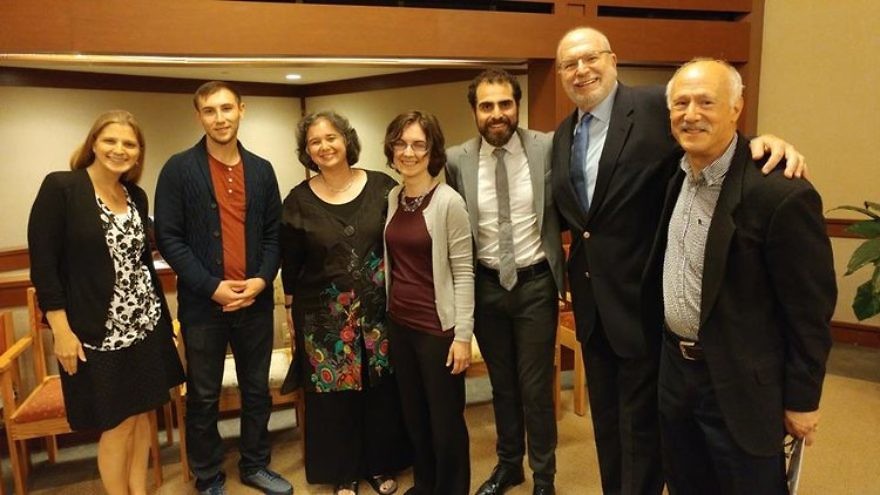 On July 25, 2017, in what appeared to be an unprecedented event in American Jewish history, a group that came into existence as a front for a terrorist organization that murders Jews was invited to solicit donations at a synagogue.

On that date, Rabbi Howard Jaffe of Temple Isaiah in Lexington, Mass., hosted three Muslim leaders, whom he presented to his congregation as wonderful people and friends of the Jewish community. The event was seductively titled “Out of Many, One,” and was billed as an important interfaith bridge-building affair.

Yet video footage of the event (which has now been removed from YouTube) and printed materials handed out to attendees reveal that what the rabbi presided over was something quite different. It was a political rally where Islamist extremists pretending to be moderates sought to enlist Jews in their campaign to undermine U.S. government counter-terrorism efforts, while raising funds for a Hamas-connected group—all in the name of “social justice” and interfaith harmony.

According to the Anti-Defamation League (ADL) and the FBI, “CAIR and its founders were part of a group set up by the Muslim Brotherhood to support Hamas,” an organization whose charter calls for the murder of every Jew on the planet including, presumably, all of Rabbi Jaffe’s gathered flock. In 2009, a federal district judge ruled that prosecutors have established “at least a prima facie case as to CAIR’s involvement in a conspiracy to support Hamas.” Since then, CAIR has put itself forward to the public as a civil rights group. But even in that guise it has sought to persuade American Muslims to oppose the U.S. government’s counter-terrorism efforts, and the ISBCC and MJL have recently joined its cause.

The rabbi presented his guests as people who are allied with the progressive values of his congregation. The Islamist speakers tried to act the part. The ISBCC’s Naseredden, for example, claimed that he’s as American as apple pie. In fact, the mosque’s youth training curriculum is used to radicalize the historically moderate Boston Muslim community. It is therefore not a complete surprise that the ISBCC and its sister mosque in Cambridge, Mass., where Nadeem Mazen is a prominent member, have been home to at least 13 convicted, killed or fugitive terrorists, including the Boston Marathon bombers.

Many of these terrorists are still considered heroes by a significant fraction of the ISBCC’s membership. A few years ago, the ISBCC held a pep rally in support of almost two-dozen convicted terrorists from around the country. During the rally, an ISBCC imam called America “the land of the coward, the home of the slave” and threatened that “this nation, by God, will be brought to its knees.”

After the Boston Marathon bombing, President Barack Obama’s Justice Department initiated a program called “Countering Violent Extremism” (CVE) to deal with American-based terrorism. New England’s ADL office became an integral part of this effort. Its executive director, Robert Trestan, insists that CVE is vital to Jewish safety, telling the Boston-area Jewish Journal, “Islamic extremists are trying to recruit people for violence, particularly violence against Jews. We can’t afford to waste time discussing any longer. We need to take action to prevent them from recruiting vulnerable people in our community.”

But Rabbi Jaffe’s second guest, Marzouk, told the congregation that she founded the Muslim Justice League to fight against the very CVE effort that ADL considers vital to the safety of New England’s—including Rabbi Jaffe’s—Jews.

Marzouk argued that American Muslims should refuse to give aid to law enforcement officials investigating Islamist terror plots against their fellow Americans. She handed out flyers that alleged, without evidence, a widespread conspiracy of “targeting Muslims through U.S. government policy” that “has occurred for many decades.” Her fliers cited the case of Tarek Mehanna, an ISBCC member and hero among the Massachusetts Islamist community, whom she portrayed as unfairly prosecuted and stripped of his liberties by an Obama administration anti-Muslim witch hunt.

What Marzouk’s fliers didn’t mention was that Mehanna had pledged his loyalty to Al-Qaeda in Iraq, the forerunner of Islamic State, and that he had plotted a machine gun massacre at a Massachusetts shopping mall. According to the Department of Justice, “Mehanna and his coconspirators, who shared videos of the deaths of American servicemen, seemed to delight in the most horrific atrocities.” (The videos included American soldiers having their rib cages ripped open and set on fire with gasoline. “[N]ice juicy BBQ,” Mehanna gloated. “Texas BBQ is the way to go…I want more BBQ sauce videos.”) None of this was presented to the congregation, but Rabbi Jaffe cannot claim he didn’t know about it because we had previously shared the information with him.

Another of the rabbi’s guests, CAIR’s Mazen, complained to the gathered Jews that New York cops embedded informants within MIT’s Muslim Students Association when he was its president. But Mazen did not disclose any of the obvious reasons for them to do so. During the time Mazen attended MIT, for example, his spiritual leader, MIT Muslim chaplain Suheil Laher, happened to run Al-Qaeda’s main fundraising base in the U.S. and was linked by the FBI to the 1993 World Trade Center bombing. The MIT Muslim chaplain openly called for jihad against non-Muslims on his MIT website, and under his influence, another MIT graduate became Al-Qaeda’s most notorious female leader, at one point being the most wanted and dangerous woman in the world. Boston’s Islamist leaders consider her “Lady Al-Qaeda,” a hero.

“I mean the Muslim brotherhood doesn’t really exist in this country,” Mazen told the congregation. “There’s no political Islam,” he said.

The falsity of such claims has been made clear by federal trial evidence and academic research on radical Islam in this country.

Mazen then blasted Israel and the U.S. He suggested that the congregation should “engage in difficult conversations” about the supposed “maleficence” of both Israel and the U.S., whose governments “often subvert the will of the people and the natural democracy that it is owed.”

As the program came to a close, the Islamists asked the Lexington Jews for money. “My project this year is I have to raise a million dollars,” Mazen announced. “Don’t send clothes, send money. I’m not afraid to say it anymore.”

“Go out and donate to any Muslim organization, ISBCC, CAIR, Jetpac, Muslim Justice League, come on, donate to us,” urged Marzouk.

Lexington’s citizens have the right to support any cause they like, but the notion that Jewish institutions should be used to promote fundraising for groups such as these is appalling. Organizations that are either linked to terrorism or that seek to impede law enforcement efforts to prevent slaughter should not be confused with those that advance social justice. Nor should sympathy with Muslims that are wrongly associated with support for terror lead well-meaning Jews to aid groups that pose as defenders of civil rights, but are on the wrong side of the argument about preventing radical Islamist violence and hate.

Yet it appears that Boston’s Islamists are planning more “Out of Many, One” events at other synagogues—Temple Beth Zion in Brookline, Mass., is next.

We can only hope that congregants there and throughout the U.S. wake up and understand what is at stake when groups that spew hatred against Israel (not just settlements), and rationalize terror rather than confronting it, are given a misguided seal of approval from Jewish communities.

Dr. Charles Jacobs is president and Ilya Feoktistov is a board member of Americans for Peace and Tolerance.