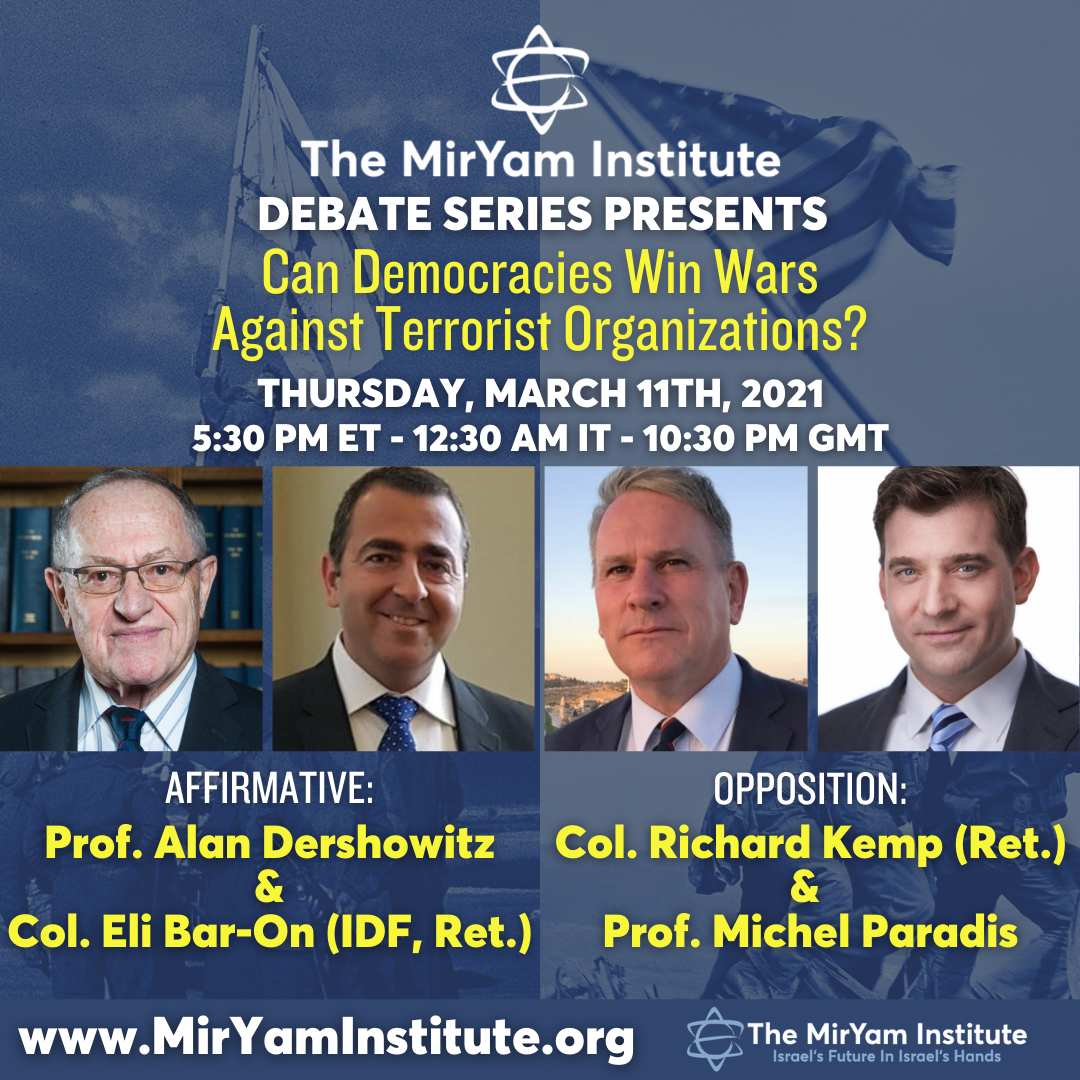 To debate the topic, The MirYam Institute has again assembled a team of Israeli, American and British experts.

Alan Dershowitz and Col. Eli Bar-On (IDF Ret.), will present arguments in the affirmative. Facing them down in opposition will be Col. Richard Kemp, former Commander of British Forces in Afghanistan and Columbia Law School Human Rights Lawyer, Michel Paradis.

Expert moderators will challenge the debaters. A live audience vote will be cast and the winning panel will be declared.

The question has real relevance to anyone with a vested interest in the security of Israel and Western civilization. Israel faces regular terror attacks that often escalate into major military operations on her northern and southern flank. The United States and its democratic allies frequently deploy overseas in order to combat terrorist organizations that threaten their way of life. But can Israel and the West win in these conflicts?

Benjamin Anthony, Co-founder and CEO of The MirYam Institute said that “as a veteran of military campaigns in which the IDF mobilized en-mase in order to quell threats from terrorist organizations massing on Israel’s borders, I feel this question is more than worthy of debate and well worth analyzing. Whether at war in the north or the south, always present was a pervasive sense that Israeli soldiers will soon have to return to the battlefield, against the same enemy, with the same lack of a comprehensive triumph, at a time of the enemy’s choosing.”

“Hosting debaters as expert as Alan Dershowitz, Colonel Kemp, Col. Eli Bar-On and Prof. Paradis presents us with a remarkable opportunity to hear from a range of experiences acquired over several decades, in several countries and on several battlefields (the military and the non-military). Those experiences will inform what promises to be an engaging and substantive debate.”

The institute’s co-founder, Rozita Pnini, a veteran of the First Lebanon War, said “I saw my friends return from the battlefield. Now many of them have their own children serving in Israel’s fight against terrorist organizations. While Israel has become a global expert on how standing militaries can best confront terrorist organizations, I’d like to know how and if Israel and her western allies can actually prevail. I believe we can, but I think we’ll all benefit from this debate.”

Col. Eli Bar-On, former Deputy Military Advocate General of the IDF, arguing in the affirmative, said he “can’t wait to take part in another great Miryam Institute event, advocating for our democracies’ strengths in the face of terror. Doing so alongside Professor Alan Dershowitz, one of the world’s leading advocates, and being challenged by two fine intellectuals, Dr. Michel Paradis and Col. Richard Kemp, will ensure that we raise the level of our debate to promising highs.”

“Israel has become the laboratory of thought on asymmetrical warfare, due to the threats we face and our ability to prosecute wars within the bounds of the Law of Armed Conflict. But when it comes to war-fighting and war-winning, the law is a very imperfect instrument. By no means does it provide a comprehensive pathway to resolution or positive outcome. This panel of military commanders, legal practitioners and public intellectuals will raise the bar of the debate and thought on this subject. I’m looking forward to being persuaded one way or the other and I’m very keen to learn what our audience thinks.” said Benjamin Anthony.

To learn more about The MirYam Institute, visit www.MirYamInstitute.Org

To Register For the Debate Click Here
JNS Promo+ is an ideal publishing platform to promote organizations and one-of-a-kind initiatives. To learn more about publishing via JNS Promo+, please click here.