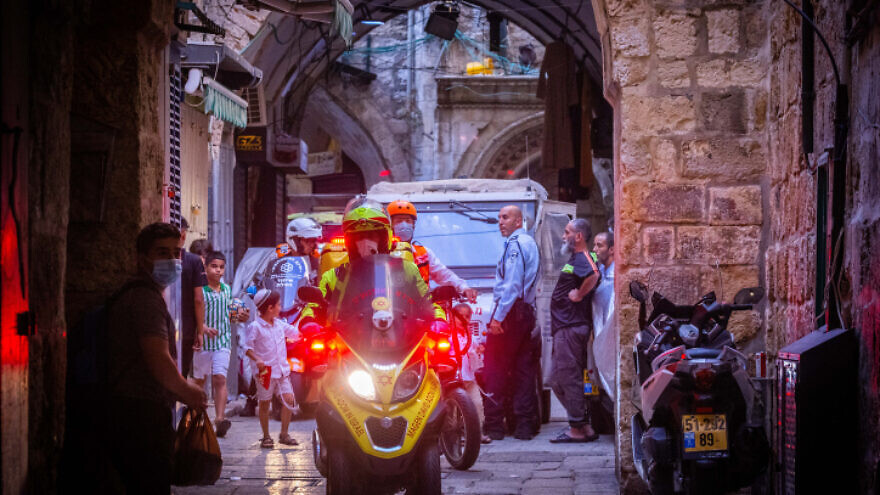 Police near the scene of an attempted stabbing in Jerusalem's Old City, on Sept. 10, 2021. Photo by Olivier Fitoussi/Flash90.
Spread the word.
Help JNS grow!
Share now:

A 30-year-old woman approached police officers stationed near the Temple Mount’s Chain Gate and attempted to stab them, the Israel Police said in a statement. The officers opened fire, neutralizing her.

In a separate incident just hours earlier, Border Police and Israel Defense Forces units were fired upon after entering the village of Burqin, to the west of Jenin in northern Samaria, to search for illegal weapons, according to police. Undercover Border Police operatives neutralized the shooter and seized the weapon used in the attack.

There were no Israeli casualties reported in either incident.

The incident was the second in Burqin this week. On Sunday, two soldiers from the IDF’s elite Duvdevan unit were wounded, one critically, in a gunfight that erupted in Burqin during an arrest raid.

At least four terrorists were killed in what the IDF described as heavy exchanges of fire in five separate incidents across Judea and Samaria on Sunday. IDF forces came under fire in the village of Beit Anan, northwest of Ramallah, as well, but managed to make arrests despite the assault. Another terrorist was apprehended in a raid in Kafr Dan, north of Jenin, without incident. Three others were killed in a clash near Mount Hadar.

According to Israeli Prime Minister Naftali Bennett, the terrorists had been planning an “imminent” attack.

“The soldiers and commanders acted as we expected them to and have our full backing,” he said.