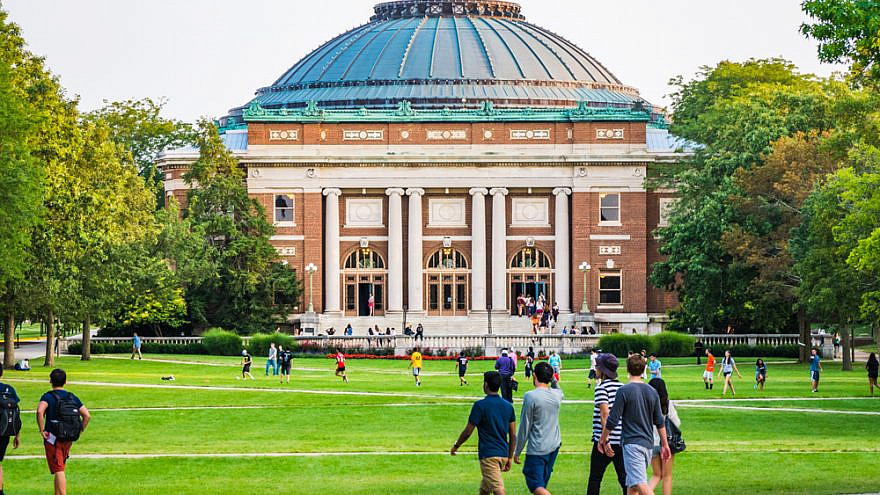 Students walk on the Quad at the University of Illinois-Urbana campus in 2016. Credit: Leigh Trail/Shutterstock.
Spread the word.
Help JNS grow!
Share now:

The first was faculty members denying Jewish students educational opportunities by refusing to provide recommendations for study-abroad programs in Israel in line with the BDS movement’s calls for an academic boycott of Israel.

The denial of educational opportunities also manifested itself in recent years, according to the letter, through faculty members refusing to “make recommendations on hiring, promotion and grant-making decisions” when it concerned Jewish or Zionist students.

Two other issues the letter addressed were faculty members introducing anti-Semitic and anti-Israel biases in the classroom and creating biased curricula to that end.

Citing the American Association of University Professors Statement of Principles on Academic Freedom and Tenure, which states that while “[t]eachers are entitled to freedom in the classroom in discussing their subject,” they “should be careful not to introduce” unrelated “controversial” content in the classroom, StandWithUs urged university administrations to investigate cases where instructors used course time to promote anti-Jewish or anti-Israel biases.

“Faculty members who use classroom time to espouse biases against Israel and Jews often do so outside the scope of the subject matter at hand,” the letter said. “This is in violation of professional standards and marginalizes Jewish students based on the Zionist component of their Jewish identity.”

“University administrators must recognize that words and ideas can have terrible consequences,” said Rothstein. “As a daughter of Holocaust survivors, I know firsthand the dangers that can arise when critical thought deteriorates, minority groups are marginalized, and bias and hate are normalized on campus.”

StandWithUs also stressed the issue of university “social-media accounts, listservs, and school logos or brands” being used to promote one-sided perspectives on political issues, such as the Israeli-Palestinian conflict, saying when college departments engage in such use of school resources, “they likely act outside the scope of their departmental purview, professional standards of conduct and the bounds of academic freedom.”

The letter urged universities to address discrimination and harassment students face for their perceived connection to Israel or their Jewish and Zionist identities. It called for university administrations to include training on anti-Semitism in faculty diversity training programs, to appoint a diversity officer focusing on anti-Semitism and to adopt the International Holocaust Remembrance Alliance’s (IHRA) working definition of anti-Semitism.