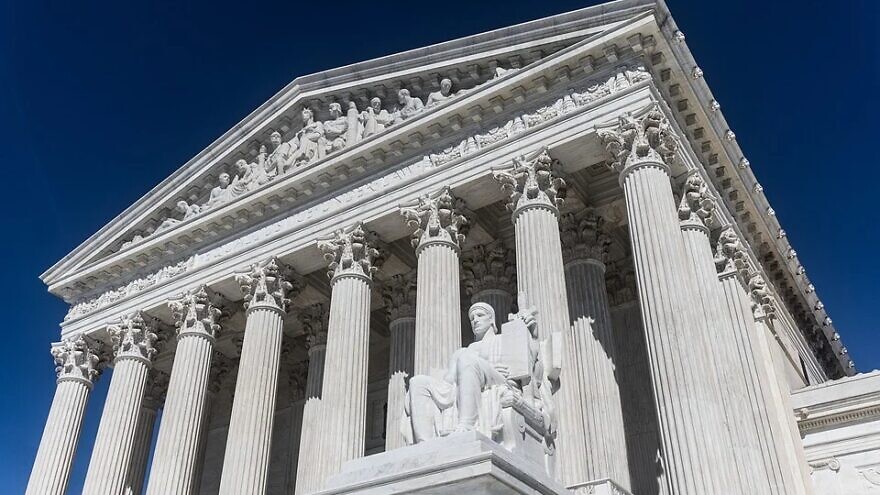 (June 21, 2022 / JNS) In a decision celebrated by Orthodox Jewish groups, the U.S. Supreme Court ruled on Tuesday that states could not prevent parents from using education vouchers for schools that provide religious instruction.

The case stems from the state of Maine implementing a program that provides private-school tuition assistance to all families with school-age children who live in areas that do not operate their own high schools. Since 1981, however, parents were not allowed to choose a school with religious instruction for children and have it funded with the program.

Writing for the 6-3 majority in Carson v. Makin, Chief Justice John Roberts wrote that the state’s policy of paying for tuition in certain private schools as long as they do not have religious instruction is discrimination against religion.

“Maine’s ‘nonsectarian’ requirement for its otherwise generally available tuition assistance payments violates the Free Exercise Clause of the First Amendment,” Roberts wrote in his opinion. “Regardless of how the benefit and restriction are described, the program operates to identify and exclude otherwise eligible schools on the basis of their religious exercise.”

Advocates of religious education considered the policy discriminatory and challenged it in court twice—in 1999 and 2004—with the U.S. Court of Appeals upholding the policy. Those who supported the policy argued that striking it down would deteriorate the separation of church and state.

In the years since the earlier challenges upheld the state’s policy, the Supreme Court ruled on two cases that also dealt with state funding of religious institutions.

In 2017, the majority ruled in Trinity Lutheran Church v. Comer that the State of Missouri could not exclude a church from a grant program for nonprofits to install playgrounds made from recycled tires. In 2020, when ruling on Espinoza v. Montana Department of Revenue, the court ruled that states that subsidize private schools cannot exclude schools for being religious.

‘Culmination of decades of determined advocacy’

The Orthodox Union, which filed a friend of the court brief in the case in support of finding the policy unconstitutional, celebrated the court’s decision.

In a statement, OU’s executive director for public policy Nathan Diament called the decision a “culmination of decades of determined advocacy by the Orthodox Union and our partners.”

“The essential promise of the First Amendment’s religion clause is to guarantee religious freedom in the United States by requiring government neutrality toward religion,” he said. “A state discriminating against religion—as Maine did in its tuition-assistance program—is just as unconstitutional as a state promoting one particular religion.”

Diament added that the ruling advanced religious liberty for all faiths.

“This watershed Supreme Court ruling opens the door for our advocacy efforts at the state and local levels,” said Maury Litwack, executive director of OU’s Teach Coalition, in a news release. “OU Teach Coalition leaders will be proactively pressing for policymakers in all these states to ensure that any state and local education funding programs are fully available and accessible to nonpublic schools and their families as the Supreme Court has clearly mandated.”

Agudath Israel of America, which represents the haredi Orthodox community whose members largely send their children to private religious schools, also filed a friend of the court brief and wrote in a news release that it, too, was pleased by the decision.

“We are thrilled that the Supreme Court has made clear that discrimination against religious instruction in state aid programs is a constitutional violation,” wrote Rabbi Abba Cohen, Agudath Israel’s vice president for government affairs and Washington director.

He added that the decision is a “significant win for parents in Maine and across the country who will now have more freedom to choose private and religious schools for their children.”

The National Council of Young Israel also weighed in saying, “The United States Supreme Court’s decision in Carson v. Makin is a tremendous victory for religious schools and a stark reminder that faith-based institutions cannot unjustly be singled out by the government or targeted in an inequitable fashion. The court made it abundantly clear that a religious institution cannot be discriminated against solely because of its status as a faith-based entity and that states cannot deny funding to religious institutions simply because they believe that it would go towards a religious use.

“When states attempt to distinguish between an institution’s religious identity and its religious practice, it is a slippery slope that runs afoul of the United States Constitution,” the NCYI wrote. “We are grateful that the court struck down Maine’s unconstitutional program and put an end to the state’s imprudent decision to turn a blind eye to the free exercise of religion, which is at the very foundation of the democratic values upon which this nation is built. Children in religious schools are entitled to have the same opportunities to learn and thrive as students in other types of schools.”

On the other side of the political spectrum, groups like the Religious Action Center of Reform Judaism said it was disappointed with the ruling. The group had also filed an amicus brief in the case.

Justice Stephen Breyer wrote for the dissent, joined by Justices Elena Kagan and in part by Justice Sonia Sotomayor.