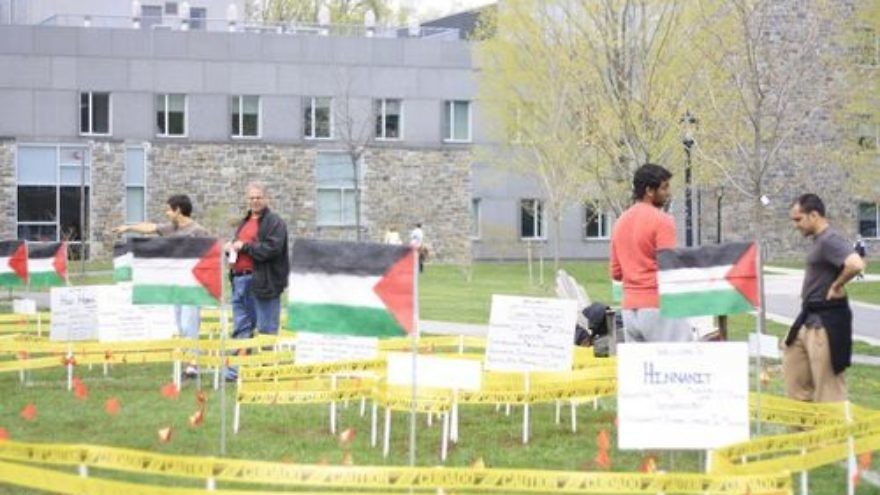 The self-labeled “pro-Israel, pro-peace” lobby J Street states that it opposes the Boycott, Divestment and Sanctions (BDS) movement against Israel, but its campus arm has sometimes come under scrutiny for partnering with anti-Israel organizations. In response to the latest such test case, at Swarthmore College in eastern Pennsylvania, J Street is clarifying that it in fact does “not have any problem” with co-sponsoring programs with pro-BDS groups.

“We are co-hosting a discussion with J Street tonight at 7:30 in Kohlberg 116. Everyone is welcome,” Swarthmore SPJP tweeted.

Additionally, J Street U and SPJP, along with other Swarthmore campus groups including Hillel and Christian and Muslims clubs, last week held a vigil to honor those who died in the Gaza conflict. (Hillel International’s Israel guidelines forbid engagement with groups or speakers that “delegitimize, demonize or apply a double standard to Israel,” but Swarthmore Hillel last year decided to reject those guidelines and align with the “Open Hillel” movement.)

On a national level, J Street states that it “opposes the global BDS movement” and believes that BDS is an “inappropriate way” to try to resolve the Israeli-Palestinian conflict. But in response to an inquiry about the Swarthmore events, a J Street spokesperson explained how the lobby’s co-sponsorship policy does not preclude partnering with pro-BDS groups.

“Our policy in terms of co-sponsorship is pretty consistent. We do not support BDS, but we do not have any problem with co-sponsoring programs with organizations that do,” Jessica Rosenblum, J Street’s director of media and communications, told JNS.org.

J Street’s co-sponsorship policy extends to groups on both the anti-Israel or pro-Israel side of the spectrum.

That policy was reflected by J Street’s decision in July, during the Gaza conflict, to pull out of a communal Israel solidarity rally in Boston. Shaina Wasserman, J Street’s Boston director, wrote in a letter to the local Jewish Community Relations Council that the lobby decided to pull out of the rally because the event did not include speakers who represented its “pro-Israel, pro-peace perspective.”

“What was missing for us in this rally, and what ultimately precluded our co-sponsorship, was that despite our efforts, there was no space made to raise the issues that follow from our commitment to Israel’s Jewish and democratic future,” wrote Wasserman.

A source familiar with the situation at Swarthmore College told JNS.org that the SPJP chapter there is a “very, very radical group” that has held some aggressive anti-Israel events over the past several years, including mock Israeli checkpoints, anti-Israel speakers, campaigns to boycott of Israeli products, a campus “apartheid wall,” and divestment petitions.

“This is not one of the more moderate SJP [chapters] by any means,” the source said. “This is a very hostile campus.”

Swarthmore’s J Street U chapter, the source explained, “is one of those borderline chapters that has gone a bit further than their national mandates. … This is a really interesting example of how national J Street does not force their principles on their local J Street chapters.”

A similar co-sponsorship situation came in March 2014, when J Street U and even Hillel at Washington University in St. Louis co-hostedan event with the NGO “Breaking the Silence,” an organization that works with disgruntled Israeli veterans to promote criticism of the Israel Defense Forces.

At Swarthmore, besides collaborating on programming with SPJP, J Street U has also defended the group when it has faced criticism. This past spring, when SPJP installed an exhibit in the school’s science center “which brings to light various barriers to education that Palestinian children in the occupied territories face on a daily basis,” some Swarthmore students were offended by the announcement of the exhibit and called it “sickening” and “anti-Israel,” particularly because it coincided with Holocaust Remembrance Day. But in a letter to the editor in Swarthmore’s Daily Gazette, J Street U defended the exhibit and encouraged students to “determine their opinions based on their interpretation of the actual content.”