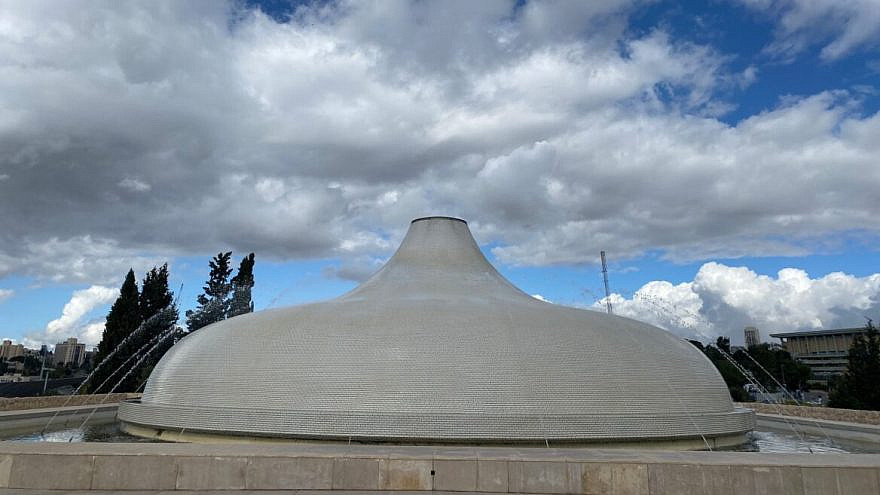 The Shrine of the Book at the Israel Museum. Photo by Danya Belkin.
Republish this article
1016 WORDS
Spread the word.
Help JNS grow!
Share now:

(February 3, 2021 / Israel21C) Jerusalem is full of beautiful buildings—everywhere you walk, both old and new, religious and secular, ancient and modern.

While everyone has favorites, ISRAEL21c chose these 10 to best represent a variety of unique structures from different eras.

The Israel Museum’s Shrine of the Book

Located on the campus of the Israel Museum, the Shrine of the Book was designed by Armand Bartos and Frederic Kiesler to house the first seven Dead Sea Scrolls found in Qumran in 1947.

The structure represents the scrolls that it houses. The white dome reflects the lids of the jars in which the scrolls were found. The contrasting colors of white and black are intentional, to represent the tension of the scrolls. 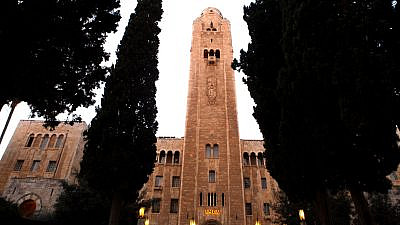 The Jerusalem International YMCA, constructed in 1933 by Arthur Loomis Harmon (the same architect who built the Empire State Building), was created with visions of peace and unity among varying religions and political outlooks.

Architectural traditions of Judaism, Christianity and Islam were incorporated through elements of Byzantine, Romanesque, Gothic and neo-Moorish styles. The many columns and windows add to the building’s beauty and the “secret” garden behind it is filled with a fountain and stunning architecturally pleasing canopies. The tall tower in the center stands out above the Jerusalem skyline. 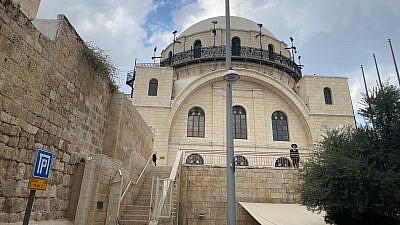 Located in the Jewish Quarter of the Old City lies the historic Hurva Synagogue, built in 1864 in a Byzantine Revival style.

Destroyed during Israel’s War of Independence in 1948, it was rebuilt in its original Ottoman design by Jerusalem architect Nahum Meltzer in 2010.

The domed roof is supported by massive pilasters. On the interior, the large Torah ark stands out with its ornamental gates. As one of the tallest structures in the Old City, the Hurva Synagogue can be seen from miles away.

Church of the Holy Sepulchre 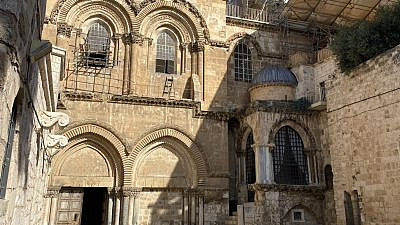 Church of the Holy Sepulchre in Jerusalem. Photo by Danya Belkin.

The circa-4th century Church of the Holy Sepulchre is a pilgrimage center for Christians everywhere and a piece of chaotic architectural artwork.

Much of its holiness stems from the belief that it is the place of Jesus’s crucifixion and burial.

What stands today is the work of the Crusaders in their reconstruction of the church in 1149 C.E. The church has been influenced by Greek Orthodox, Catholic and Armenian Orthodox styles.

The beautiful art, mosaics and decorations—and magnificent ceiling—that cover the interior instill a sense of magic in all who visit.

Dome of the Rock 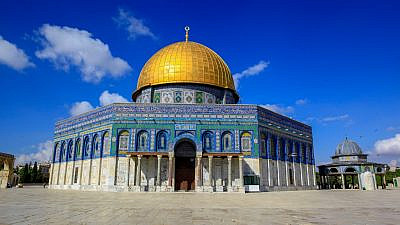 The Temple Mount compound, site of the Al Aqsa Mosque and the Dome of the Rock, in Jerusalem’s Old City. Photo by Sliman Khader/Flash90.

One of the most iconic Jerusalem images, the brilliant gold-wrapped dome can be spotted from myriad places around the city.

Constructed from 685-691 C.E. at the order of Umayyad Caliph Abd Al-Marik, this structure was built as a religious focal point for his supporters and marked the foundation of Islamic-style architecture.

Wall and ceiling mosaics cover the interior of the Dome of the Rock, which sits where the two Jewish temples stood in antiquity. It is also thought to be the location of the Foundation Stone—the rock at the center of the mosque where it is said that God created the world and the first human beings. 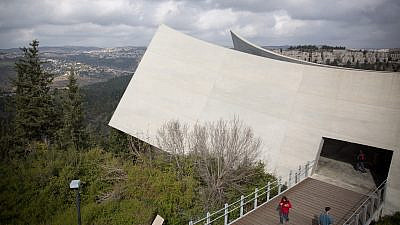 In 2005, its newest structural addition opened and was designed by world-renowned architect Moshe Safdie. From the purposeful use of lighting to highlight and underscore the exhibits to the prism-like structure of the building, there is a sense of elegance and beauty that embodies this building.

The entire structure is composed of reinforced concrete and penetrates Mount Herzl, with both ends cantilevering into the open air. 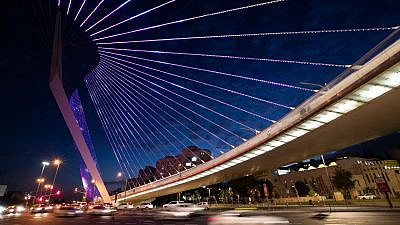 View of the String (Chords) Bridge at the entrance to Jerusalem. Photo by Yonatan Sindel/Flash90.

Although not a building, this architecturally pleasing bridge was designed by the famous Spanish architect Santiago Calatrava. It is one of the most noticeable sites when entering Jerusalem from the west.

Construction began in 2008, and the bridge entered service in 2011 as a carrier for the light rail and as a pedestrian/cycling path.

The high mast supported by steel cables makes for a unique, abstract structure that is open to interpretation. The tallest structure in Jerusalem at the time it was built, it is especially beautiful at night when it has its own light show. 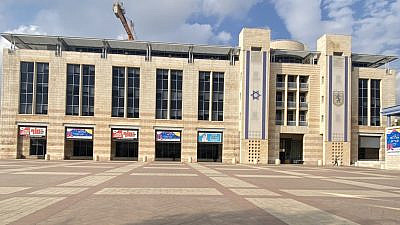 If you take a walk on Jaffa Road, you will come across Safra Square, home to Jerusalem’s City Hall complex. The main building is a blend of post-modern architecture and incorporates traditional Mamluk style.

The square itself is an open space typically used for community events. Weekly tours of Safra Square are available at no cost, in English. 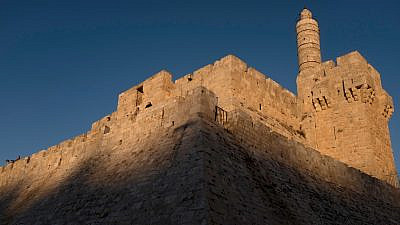 David’s Tower next to Jaffa Gate in the Old City of Jerusalem on Jan. 11, 2018. Photo by Lior Mizrahi/Flash90.

Located near Jaffa Gate, this historic citadel and former medieval fortress contain archaeological finds dating back 2,500 years. The structure was built by Herod the Great as a palace and fortress, and was built and rebuilt many times over the years.

Most recently, this structure was converted into the Tower of David Museum, showcasing the history of the city.

Built from Jerusalem stone (a pale limestone-like stone used since ancient times), this structure is a classic historical building. The old, archaic look of the building adds to its beauty. The main tower sticks out above the rest of the structure and was used as a lookout point. 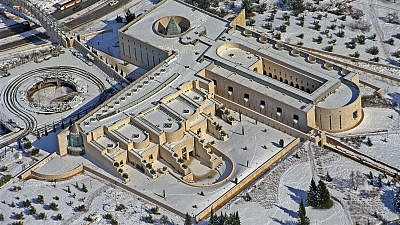 This impressive structure houses the chambers for 15 justices and serves as Israel’s High Court of Appeal as well as High Court of Justice. Its outer beauty does not fall short of suggesting its importance.

The building was donated to Israel by Jewish philanthropist Dorothy de Rothschild and opened in 1992. The structure was designed by the brother-sister team of Ram Karmi and Ada Karmi-Melamede, who won a design competition in which 180 architectural firms from Israel and around the world vied for the opportunity.

The Supreme Court contains three main sections: a square library wing, a rectangular administrative wing and a wing with five courtrooms. The geometric shapes were inspired by biblical metaphors and influenced by ideals of justice, truth, law, charity and mercy.

During non-coronavirus times, free daily tours of the building are offered in English. Meanwhile, take a virtual tour here.

This article was first published by ISRAEL21C.