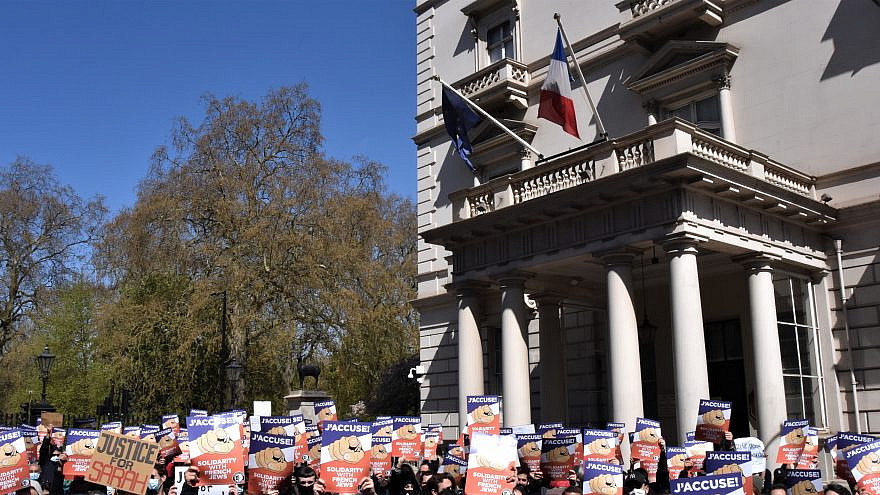 (April 26, 2021 / JNS) Tens of thousands of people turned out on Sunday in cities across the globe to show their support for Jews in France and express their desire to see justice done in the case of Sarah Halimi, who was murdered by her 27-year-old Muslim neighbor in 2017.

Rallies were held in the French cities of Toulouse, Strasbourg and Lyon, and worldwide in Tel Aviv, London, Miami and elsewhere. By far, the largest rally was in Paris, where thousands near the Place Du Trocadero heard from members of Halimi’s family, who spoke out decrying the ruling of the Court of Cassation, France’s high court, earlier this month that her now 32-year-old killer, Kobili Traoré, who yelled Allahu Akbar (“God is great”) as he held her over her apartment window, could not be tried for murder because he had taken a significant amount of marijuana before attacking Halimi.

In London, where the number of rally participants was limited because of COVID-19 restrictions, some 200 people attended the in-person rally in front of the French embassy, while some 10,000 others watched the virtual simulcast.

“Around the world, Jews and our allies are standing together at gatherings like this to call for justice for French Jews and to show solidarity with French Jews,” said Gideon Falter, chief executive of the Campaign Against Antisemitism, which sponsored the event.

Noting that Halimi was a mother, doctor, schoolteacher and someone who did not seek the spotlight, he pointed out, “and yet, here we are standing here with Sarah Halimi’s face on a placard demanding justice for her. Why?” 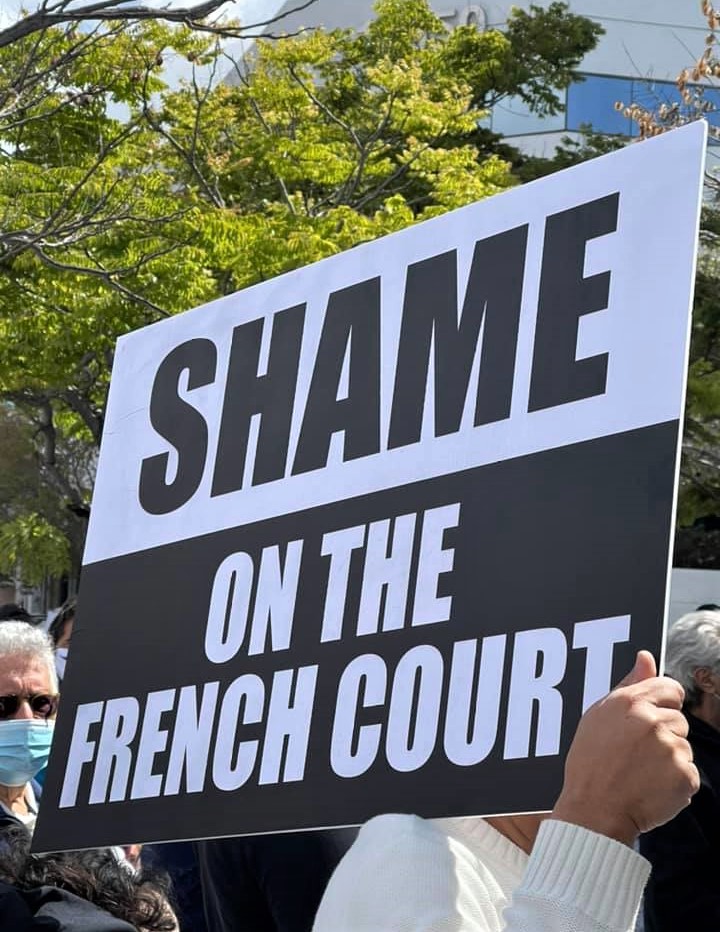 A sign at a rally in Paris against the French court ruling in the Sarah Halimi case, April 25, 2021. Source: Facebook.

Because on the night she was killed, explained Falter, the police waited outside and didn’t act fast enough. And because, he said, it took months for the “anti-Semitic nature of the crime to be recognized.”

And because now, he concluded, “we know there will be no justice for Sarah Halimi in a French court.”

Also speaking to the London crowd, Dame Maureen Lipman, a British actress, said, “This appalling betrayal of liberty and fraternity, not to mention humanity, by the cassation court is the next chapter of the historic anti-Semitism of the French nation. … The fact is the French government is more fearful of jihadist retribution than justice for their Jewish community.”

He continued, emphasizing that “we must stand proud together, not just when an anti-Semitic attack reminds us that we are just. Not just when a court across the world makes a heinous decision, like they did in France, to excuse the brutal torture and murder of an elderly Jewish woman because a guy smoked marijuana. We must stand proud and stand together every single day.”