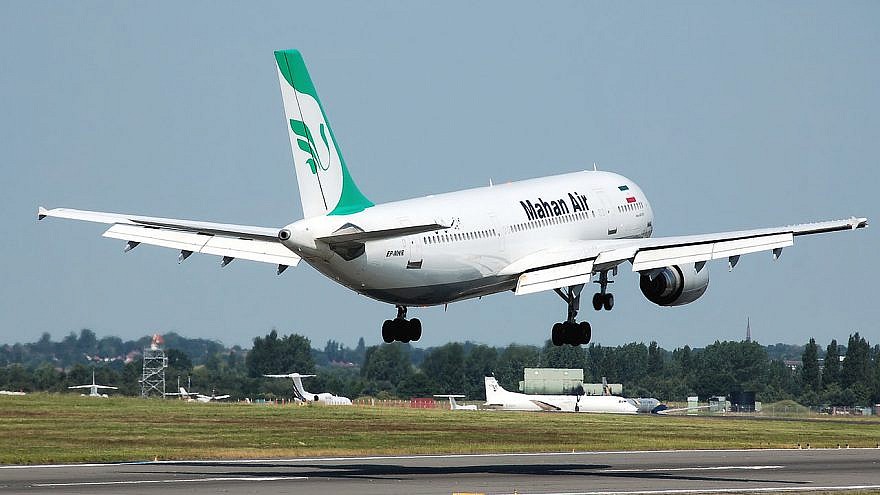 (December 15, 2022 / JNS) Mahan Air presents itself as a privately-owned airline, established in 1991 by the son of then-Iranian President Akbar Rafsanjani and headquartered at Tehran’s Imam Khomeini International Airport.

But according to a report published on Wednesday by the Alma Research and Education Center, an Israeli defense watchdog that specializes in threats from the northern arena, not much is ordinary or civilian about the airline.

In reality, says the Alma Center, the airline serves as the Islamic Republic’s main cover for transporting sizeable quantities of weapons along the Iranian-Shiite axis’s regions. Weapons produced in Iranian arms factories are sent, often in parts, to Syria, where Iran is attempting to set up missile bases, and where it is trying to arm Shiite militia proxies, and to Lebanon, where Iran’s chief regional proxy, Hezbollah, has built up an arsenal of firepower that is larger than that of most NATO armies.

“The charity is in fact an economic mask for the Islamic Revolutionary Guards Corps (IRGC), allowing it to operate legally and conduct its financial operations,” he added.

Since 1996, Mahan Air’s CEO has been Hamid Hanoukhi, a man described by Beeri as being “the former IRGC commander in Croatia and Bosnia,” where the IRGC may have sought to establish a base in Europe.

Mahan Air is subject to American sanctions but that does not prevent it from flying to multiple countries around the world, including frequent and worrisome flights from Iran to Syria and Lebanon. 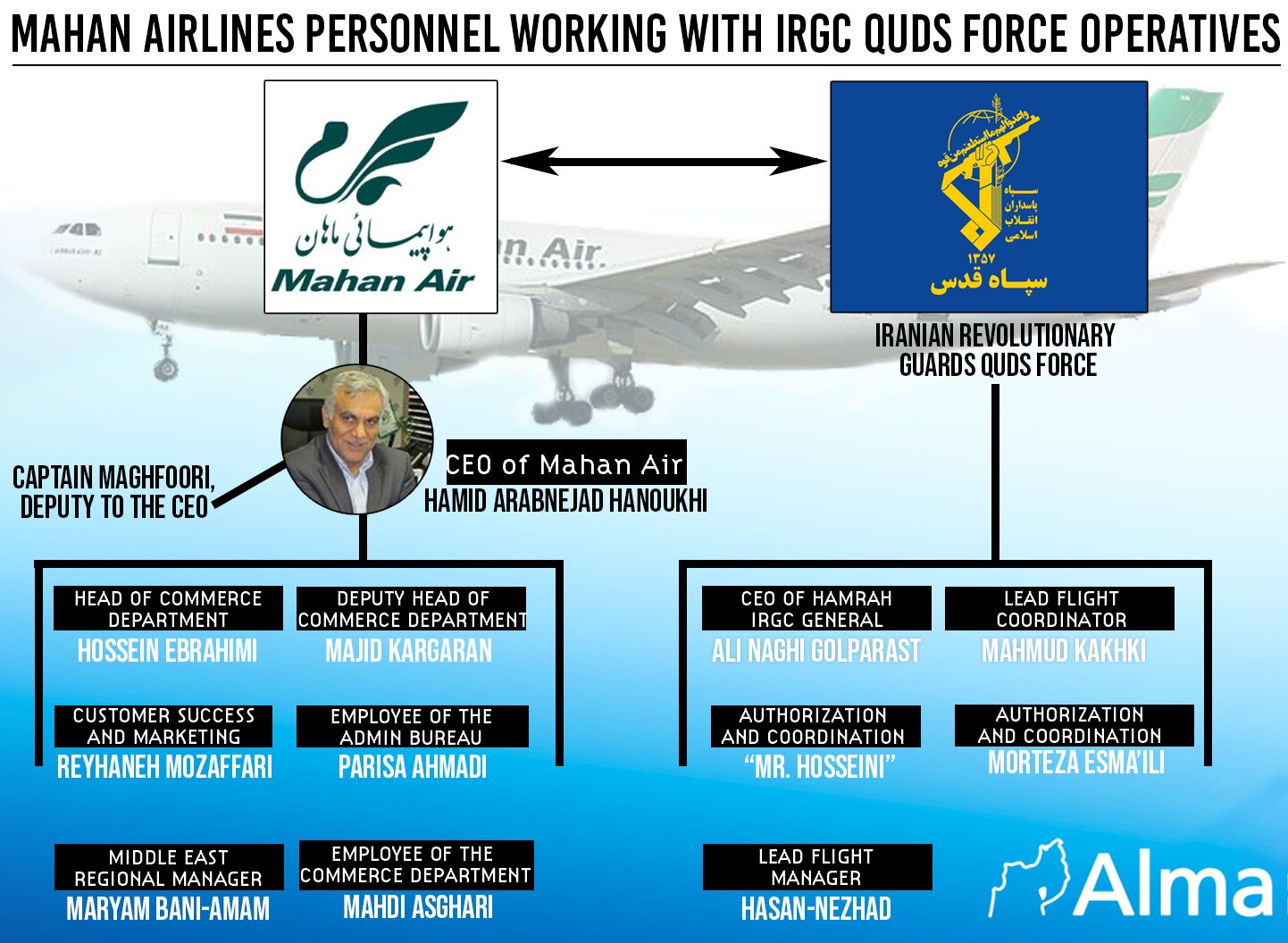 Courtesy of the Alma Center.

“It operates as a civilian business, which is in actuality working as a full surrogate for Quds Force,” said Beeri, referring to the elite IRGC unit in charge of clandestine overseas operations, including building Iran’s network of terrorist proxies.

In light of the major logistical demands involved in transporting Iranian weapons and military personnel to Syria and Lebanon, Beeri asked, “How can a civilian commercial organization handle this task unless it is its primary goal?”

The Alma report includes a list of the 63 Mahan Air pilots it said are involved in the smuggling of weapons.

“These pilots are not officially affiliated with the IRGC. However, it is highly likely that some of these are IRGC pilots that were loaned to the company. Other pilots who may not be of the IRGC are simply turning a blind eye,” said Beeri.

In June 2022, Argentine authorities arrested an Iranian pilot working for Venezuela’s Emtrasur Cargo, a subsidiary of Conviasa, the South American country’s flag carrier and largest airline, and found images of him on his cellphone armed and in IRGC uniform.

The pilot, Gholamreza Qasemi, is a former general in the Revolutionary Guard Corps Aerospace Force who was directly involved in flights to Syria of Fars Air Qeshm, a cargo branch of Mahan Air.

“It would be fascinating to see what we discover on the phones of Mahan Air pilots,” said Beeri.

Israeli defense officials have expressed concern that the flights will be used to deliver sensitive equipment and weapons to the Hezbollah terrorist organization.

But Mahan Air has been ahead of the curve when it comes to such flights, according to Beeri.

“As of now, so far this year, Mahan Air flew to Damascus International Airport at least 110 times, and 39 times to Beirut’s Rafiq Hariri Airport. It flew at least 12 times to Syria’s Aleppo Airport,” he said.

On August 31, one particular Mahan Air flight made international headlines when every airport it appeared to approach in Syria was mysteriously bombed before it could land.

And on August 9, added Beeri, a Mahan Air flight took off from Dubai for Tehran, according to civilian flight tracking applications. It then appeared to vanish, and, seemingly out of nowhere, took off from Beirut for Tehran, leaving an information gap regarding how it suddenly reached the Lebanese capital.

“How did it arrive in Beirut? Is there something it is trying to hide?” he asked.

The answer, Beeri suspects, has a lot to do with Quds Force’s Unit 190, which is assigned to the mission of arming Iran’s proxies.

A cyber attack by an unknown group on Mahan Air on November 21 revealed, possibly, just how the Quds Force and Mahan Air team up to operate secret military and terrorist supply flights.

“What can we learn from an analysis of the data that came up from the hack? That Mahan Air has direct connections to two Iranian travel agencies. The main one is known as Hamrah. The second is known as Utab Gasat,” said Beeri.

“Mahan Air has a close relationship with Hamrah. Between 2018 and 2021, some 60,000 plane tickets were booked with Mahan, with many of these tickets going to Hamrah. A look at passenger names reveals that despite tens of thousands of tickets being booked, there are no more than nine names that appear and reappear on the passenger list. Out of 2,000 tickets, just 15 passenger phone numbers appear,” Beeri said.

The general director of Hamrah is Sardar (the rank of general in the IRGC) Ali Naji Gulfarast, who also happens to be a senior official in Fars Air Qeshm, on its board of directors.

“From this, it can be understood that Hamrah is, in fact, an executive body of the IRGC whose task is to coordinate and organize the transportation of equipment, weapons and operatives,” the Alma report concludes.

Currently, Mahan Air is barred entry by the United States, Saudi Arabia, Israel, Canada, Japan, Germany and France, but it continues to fly to countries outside of the Middle East, including China.

Iran looks set to continue its cat-and-mouse game with Israeli intelligence in the skies of the Middle East.