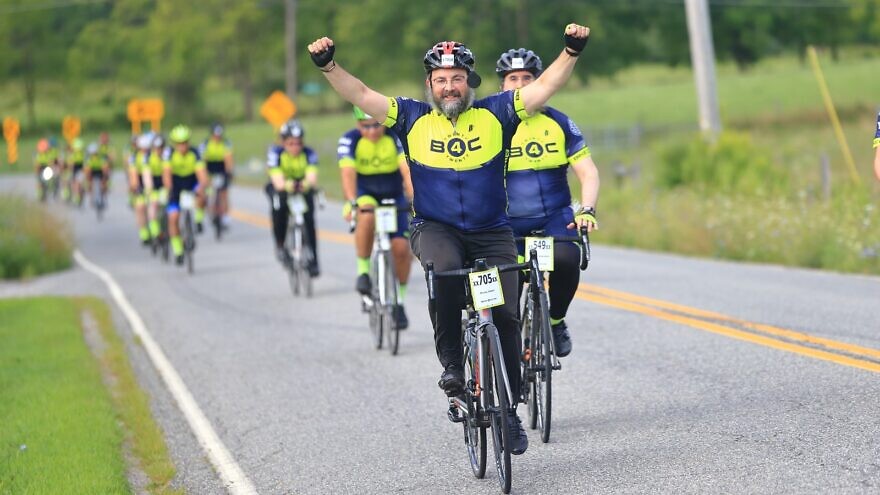 While the 23-day, 2,000-mile Tour de France is an impressive ride geared to the world’s most elite riders, Bike4Chai (for men, July 29) and the Tour de Simcha (Aug. 5), in support of Chai Lifeline, is open to everyone, and each year brings smiles to the faces of riders, spectators, and especially, children and families dealing with serious illness.

“Without Chai Lifeline and everything they’ve done for me and my family, I don’t know how I would’ve pulled through,” says cancer survivor Pessy Zeiger, 19, of Monsey, N.Y., who plans to bike the 65- to 70-mile route starting and ending off at Camp Simcha, which she refers to as “the happiest place on earth!”

She is pleased that she can participate in the bike ride and give back to an organization that was helpful to her and her family.

“I was always athletic and loved riding, but was never majorly into it,” she recounts. “Then I got cancer and was unable to get on a bike for five years. Now that I was part of Chai Lifeline, I heard so much about Tour de Simcha and wanted to do it so badly, but was unable to at that point. Two summers ago, I got invited to share my story at the TDS pasta party the night before the ride, and I made it my goal to join the ride as soon as I would be able to. Now, after four years of intense physical therapy, my muscles in my leg are strong enough, and I’m able to bend my knee enough to get on a bike. I’ve been training for the past few months and am really looking forward to riding!”

Zeiger is still closely connected to the Chai Lifeline family, which she says “got me to meet new friends going through the same situation I was in. We laugh together and share in each other’s triumphs. To this day, these are my closest friends. All the events and things they do throughout the year give me the strength to keep fighting!” 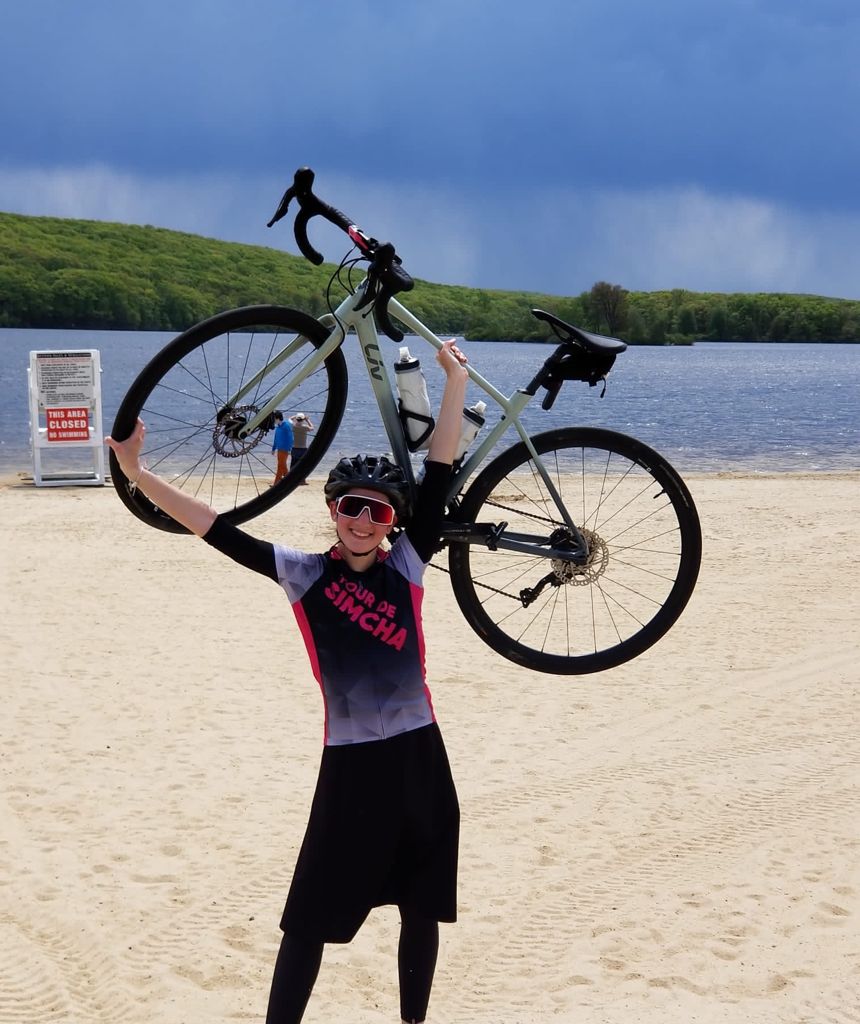 Cancer survivor Pessy Zeiger, 19 of Monsey, N.Y., plans to bike the 65- to 70-mile route starting and ending off at Camp Simcha. Photo by Lenny Groysman.

Pessy will be joined by her father, Mendy Zeiger. He reports that he rides for his health, usually training in Harriman State Park. He then shares how he and his family have personally benefitted from the organization.

“Chai Lifeline is a wonderful organization. I knew about it before and have been riding in their rides since 2012. This year is my seventh or eighth ride. Every year, when they put a child (who had benefited from Chai Lifeline’s kindness) on the dais at the pre-ride pasta loading, it was a tear-jerker. They were real children undergoing suffering. Now, it has a whole different meaning.”

Mendy Zeiger can’t imagine what it would have been like going through his daughter’s cancer treatment without Chai Lifeline. “The hospital stay would have been miserable [otherwise]. They refer you to the top doctors. They have knowledge of what it takes to have a child in the hospital. They offer food, volunteers, guidance, help with insurance, and they understand the amount of work it takes and the logistics required for parents. There are so many pieces … .”

He notes playfully that Pessy is a “much faster” cyclist, and they won’t be riding together so he “won’t hold her back.”

‘To exercise and to raise tzedakah’

Rider Avi Lazarus of Spring Valley, N.Y., retired last year from a career in the retails sales industry. He was quick to mention that he is not the oldest rider, as had been circulated. “I’m not the oldest guy, though I have been in the past,” he reports.

Lazarus says “I ride for a dual purpose—to exercise and to raise tzedakah for a wonderful organization. How can you turn them down?” 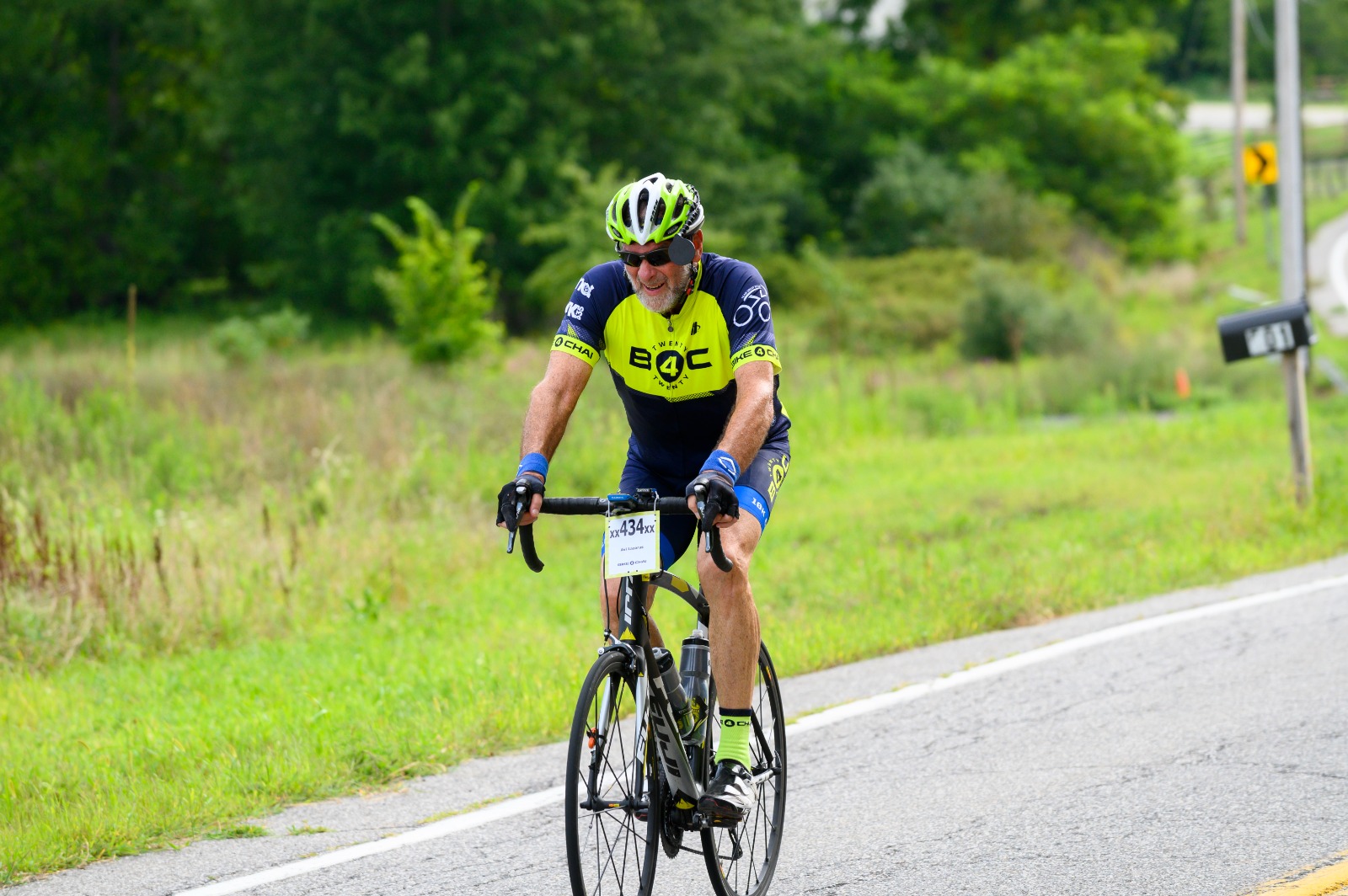 He rides with his two sons. “They make sure their old man is OK. They give me the incentive to go on—they fill my bottles for me!” In addition to enjoying being with them, he adds, “I have made a lot of friends” along the way.

Bike4Chai kicks off with an opening ceremony on July 28. The 100-mile route will begin in the early hours of July 29 with participants stopping mid-ride for at Camp Simcha (Chai Lifeline’s overnight summer-camp program for children and teens with life-threatening and lifelong illnesses), where they will receive physical and spiritual rejuvenation. 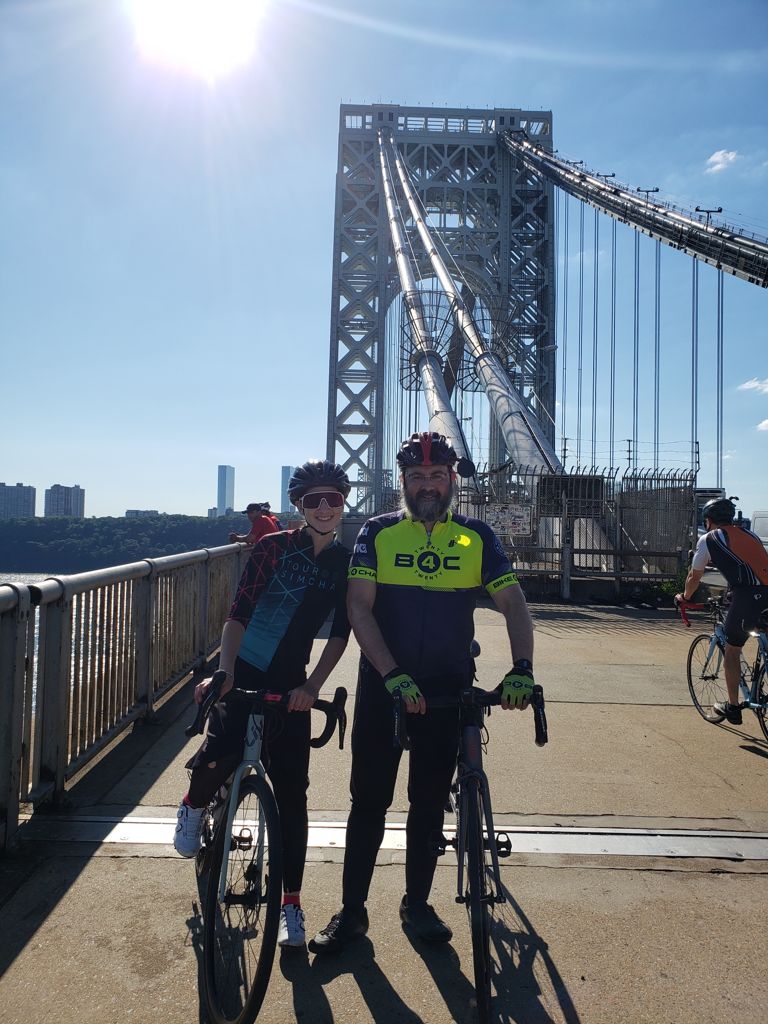 Pessy Zeiger with her father, Mendy Zeiger, at the George Washington Bridge. Photo by Lenny-Groysman.

The races raise millions of dollars each year for Chai Lifeline.

According to Yoel Margolese, director of Bike4Chai, this year’s race “will feature a record number of participants all with one common goal—to be there for children and families. The dedication and commitment of our riders is inspiring and shows our families that they are not alone.”

Rabbi Simcha Scholar, CEO of Chai Lifeline, adds that “riders and their supporters play a critical role in raising funds and awareness for Chai Lifeline’s important work. Every dollar raised enables us to provide year-round support and services to thousands of families confronting illness, crisis and loss, all at no cost to them.”

While all riders and donors come out in support of this important cause, some riders and teams go out of their way to maintain a lighter, more playful spirit. The Knight Riders, comprised of 14 participants, have already raised an impressive $91,248 from 545 donors. The legendary team proudly comes in last every year and includes a four-time cancer survivor amputee who rides a hand bike, a teenager with cerebral palsy, an Ironman competitor who serves as the team motivator, an artist and an army chaplain.