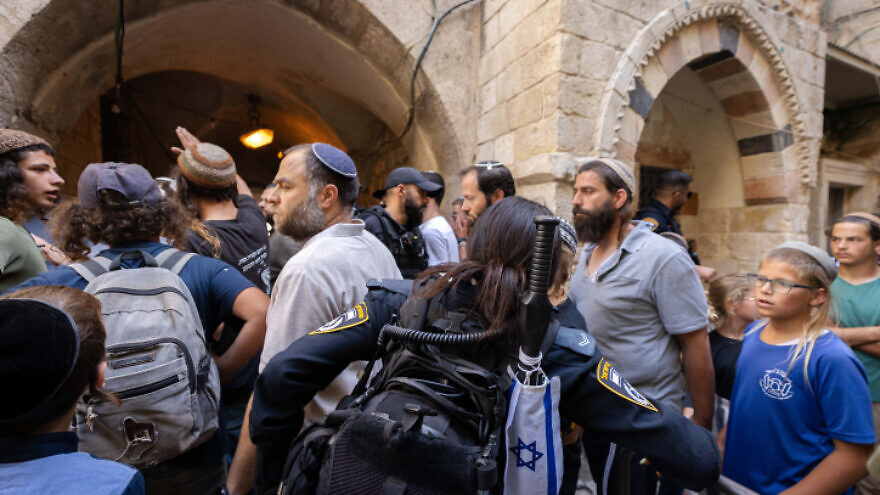 (August 7, 2022 / JNS) More than 2,000 Jews ascended the Temple Mount in Jerusalem on Sunday to mark Tisha B’Av, the fast day that began the night before that commemorates the destruction of the two biblical temples.

The visits to Judaism’s holiest site took place amid an ongoing conflict between Israel and the Gaza Strip-based Palestinian Islamic Jihad, which fired rockets towards the holy city on Sunday morning, setting off sirens in surrounding areas.

Among the visitors to the Temple Mount on Sunday was Israeli lawmaker Itamar Ben-Gvir, head of the Otzma Yehudit Party, who told Kan Reshet Bet in a radio interview that Palestinian Islamic Jihad missiles “do not deter me.”

“We are in charge here,” he said. “If we blink, they will continue. If we pound them, they will fold.”

Meanwhile, three Jews were detained on Sunday for violating the Israeli government’s prohibition against Jewish prayer on the Temple Mount, Kan reported. The report cited police sources as saying they had “no intention of allowing any provocations or disturbances in Jerusalem at the site.”

Police said that a number of Muslim worshippers near the Al-Aqsa mosque, which is located on the Temple Mount, were also arrested for “disturbing the peace, being provocative … [and] making inciteful remarks.”

Some Muslim worshippers  reportedly shouted at Ben-Gvir, “Allahu Akbar,” or “God is Greatest,” and “slaughter the Jew,” to which the parliamentarian retorted: “Am Yisrael Chai,” or “The People of Israel Live.”