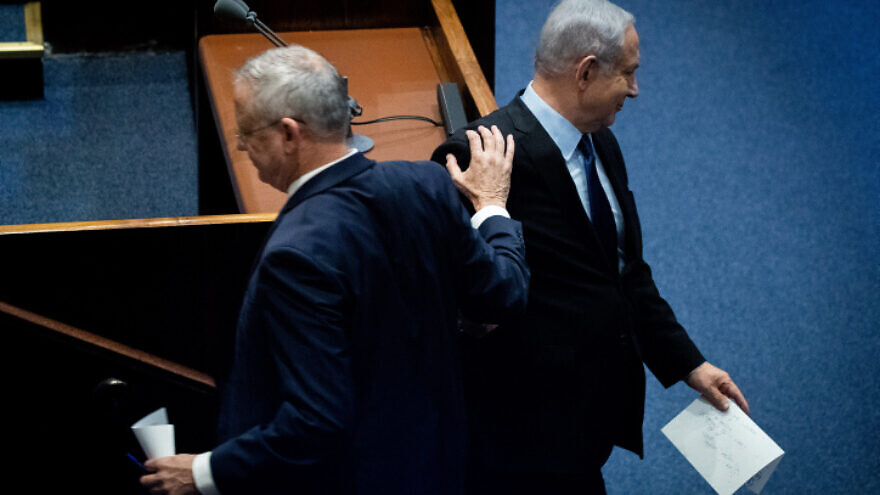 (March 26, 2020 / JNS) After nearly a year of political paralysis, Israel is finally on its way towards a national unity government as the nation battles against the unprecedented coronavirus pandemic. Benny Gantz, who has stood as Israeli Prime Minister Benjamin Netanyahu’s chief rival through three consecutive election cycles, announced that his party faction would join Netanyahu’s right-wing coalition to form a new government.

Gantz’s dramatic move jolted Israel’s political system. The agreement led to the collapse of Gantz’s own Blue and White Party.

Senior party members Yair Lapid and Knesset member Moshe Ya’alon, who each led separate factions within the larger Blue and White alignment, rejected joining a government led by Netanyahu. The pair have officially split from Gantz, and filed a motion to retain the name Blue and White as they prepare to sit in opposition to the government.

From the Knesset floor, where he currently serves as temporary speaker, Gantz explained his decision, saying, “This is not the time for fighting and splits. This is the time for responsible statesmanship, patriotism and leadership.”

He called to the citizens of Israel and said, “Let’s join hands and lead Israel out of this crisis.”

Likud Knesset member Yoav Kisch told JNS that his party “blesses Netanyahu and Gantz for this courageous step. We are dealing with a health and economic crisis like we have never seen, and the public demanded that we as leaders act with responsibility.”

Israeli Defense Minister Naftali Bennett, of the right-wing Yamina Party, told JNS that “this is the right thing for Israel in this emergency.”

Knesset member Yair Lapid attacked Gantz for breaking Blue and White’s promise not to sit with Netanyahu as he awaits the start of a trial on three separate counts of bribery and breach of trust. “He crawled into Netanyahu’s government … gave up without a fight,” said Lapid. “Over a million voters feel cheated, and that their votes were stolen and given to Netanyahu.”

“Corona,” he said, referring to the pandemic spreading around the globe, “is not a permit to give up on our values.”

Knesset member Merav Michaeli of the Labor Party sarcastically congratulated Gantz for “joining a government led by an indicted prime minister.” She then turned towards him and said, “You promised not to join with Netanyahu. There is no unity with those who are destroying Israel.”

The details of the new coalition are still being worked out, but it will most likely include 75 seats: Likud (36), Gantz’s Israel Resilience (15), Shas (9), United Torah Judaism (7) and Yamina (6), along with MKs Tzvi Hauser and Yoaz Hendel from the Telem faction. Hauser and Hendel are former Netanyahu advisers who have been the strongest advocates for a unity government.

Preliminary reports indicate that Netanyahu will give Gantz’s party an equal number of ministries to his own much larger Likud Party. Netanyahu has agreed to appoint former Israel Defense Forces’ Chief of Staff and Gantz ally Gabi Ashkenazi as Minister of Foreign Affairs, and Chili Tropper as Justice Minister.

Several ministers, including from Netanyahu’s Likud, will be forced to relinquish their portfolios. Yamina chairman Bennett, who is set to vacate his current post as defense minister, told JNS that so far, “the news about portfolios is fake news. Netanyahu has not spoken to me about this issue as of yet.”

In an amazing turnabout, Knesset member Yuli Edelstein, who resigned this week when the Supreme Court required him to call a vote for a new Speaker of the Parliament, will most likely return to his post in the new government.

The opposition will now likely be headed by Knesset member Yair Lapid, whose remaining Blue and White will be joined by the Labor-Meretz alignment, Avigdor Lieberman’s Yisrael Beiteinu Party and the Joint Arab List.

Despite Gantz receiving the recommendation of 61 Knesset members to serve as prime minister, it quickly became clear that he could not form a government without linking up with Likud.

While the Joint List recommended Gantz over Netanyahu, the Arab alliance of parties was not set to join Blue and White in a coalition government, and many members of Blue and White also opposed such an alliance. Members of Netanyahu’s 58-seat right-wing and religious bloc similarly refused to join a Gantz-led government, leaving Gantz with few options and steering Israel towards a fourth consecutive election.

Netanyahu put out a direct public appeal while dealing with an escalating coronavirus crisis on Tuesday, saying, “Benny Gantz, this is a moment which tests leadership and national responsibility. The citizens of Israel need a unity government that will work to save their lives and their livelihoods.  This is not the time for a fourth election. We both know that the gaps between us are small, and we can overcome them. Let’s meet now and establish a unity government. I am waiting for you.”

While the parties have agreed to form a government, intense negotiations are now taking place on the technical makeup of the coalition. Gantz’s party seeks legal mechanisms to ensure that Netanyahu will indeed turn the post of prime minister over to Gantz in September 2021, and not simply collapse the government and call for a new election once his 18 months as his term prime minister come to an end.

It’s been quite a month—quite a political year, in fact—from start to finish, with this agreement ending one of the most bitter and protracted election seasons in Israel’s history.