(July 25, 2021, Tel Aviv, Israel, JNS Wire) Vermont ice cream giant Ben & Jerry’s announced a surprise decision this week to discontinue sale of its ice cream products in what it termed the “Occupied Palestinian Territories.” Tel-Aviv based Shurat HaDin – Israel Law Center has announced that its organization has registered a company with the Israeli registry of companies under the name “Judea and Samaria’s Finest Ben & Jerry’s Ice Cream.” Lawyers for the organization have written to Ben & Jerry’s owners, UK-based Unilever, PLC informing them that they intend to manufacture and sell ice cream under the Ben & Jerry’s name in the areas deliberately abandoned by Ben & Jerry’s of Vermont.

In their letter to Unilever, Shurat HaDin explains that the publicly-declared decision to commercially withdraw from these territories constitutes an abandonment of the Ben & Jerry’s trademark in those areas. They note that in order to maintain trademark protection against others utilizing their name there must be a bonafide intent to conduct business in a specific region. Once Unilever announced its boycott of Judea and Samaria, what it calls “Occupied Palestine,” but which they say is “a euphemism for areas where Jews live,” it will have abandoned all its trademark protection in that territory. The Law Center has informed Unilever that it will use the Ben & Jerry’s name, and match their ice cream line, as well as adding new flavors and products using locally-sourced ingredients and traditional spices and flavors of the region.

“We no longer consider Unilever nor the Vermont Ben & Jerry’s Ice Cream company to have any right to utilize their previously-owned name or product line in the area they have publicly stated they have withdrawn from. We will now become the lawful owners of the Ben & Jerry’s name in Judea and Samaria. We warn you against operating in these territories.”

In their recent decision to boycott a region they consider to be illegally occupied by Israel, Ben & Jerry’s of Vermont has stated: “We believe it is inconsistent with our values for Ben & Jerry’s ice cream to be sold in the Occupied Palestinian Territory.”

In its letter to Unilever, Shurat HaDin wrote “while we deeply regret the company’s decision to boycott Jewish communities in Judea and Samaria, which we believe is motivated by antisemitism, we view your hypocritical choice as a tremendous commercial opportunity for the new Judea and Samaria Ben & Jerry’s. We intend to operate ice cream parlors in every Jewish community and thrive where you have left a void.” Shurat HaDin noted that Unilever has no qualms about selling its products in other regions deemed occupied by the international community such as Northern Cyprus, Western Sahara, and Tibet. The letter claims that Ben & Jerry’s targeting of just Israel for a boycott underscored that the company’s policy was motivated by hatred of Jews.

Shurat HaDin has registered its corporation and is negotiating manufacturing agreements with Israeli ice cream producers to create its new frozen products. In keeping with the Ben & Jerry’s social justice spirit they intend to distribute a portion of their profits to local Jewish charities.

According to Shurat HaDin president attorney Nitsana Darshan-Leitner: “We condemn the antisemitic decision by Ben & Jerry’s to single out Israel for boycott, though it does provide us with a commercial opportunity. The withdrawal from Judea and Samaria has created an abandonment of Ben & Jerry’s has right to own the name and market its ice cream there. It can no longer enforce its trademark in these historic Jewish areas. This is our new weapon and approach in the war against BDS: anyone who abandons selling their products in Israel will find us taking over his trademarks and rights, and selling the same products under their brand names. We are going to be attempting to seize other Ben & Jerry trademarks and rights in other occupied areas if they boycott. A trademark is only valid if you intend to continue using it. Ben & Jerry’s will rue the day they boycotted the Jewish State.” 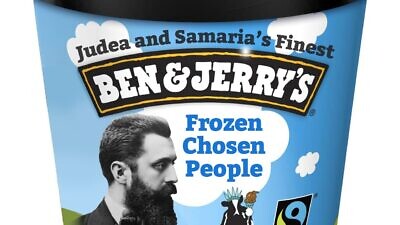 Shurat HaDin - Israel Law Center
Civil Rights Organization which is at the forefront of fighting terrorism and safeguarding Jewish rights worldwide. We are dedicated to taking legal action to protect and defend the State of Israel and its citizens. By bringing lawsuits against terror organizations and their financial patrons, defending against lawfare suits, fighting academic and economic boycotts, and challenging those who seek to delegitimize the Jewish State, Shurat HaDin is utilizing court systems around the world to go on the legal offensive against Israel’s enemies.
Publish your organization's press release on JNS Wire
Releases published on the JNS Wire are communicated and paid for by third parties. Jewish News Syndicate, and any of its distribution partners, take zero responsibility for the accuracy of any content published in any press release. All the statements, opinions, figures in text or multimedia including photos or videos included in each release are presented solely by the sponsoring organization, and in no way reflect the views or recommendation of Jewish News Syndicate or any of its partners. If you believe any of the content in a release published on JNS Wire is offensive or abusive, please report a release.