(October 15, 2020, JNS Wire) (Jerusalem, Israel) –– “ISRESILIENCE: What Israelis can Teach The World,” a collection of riveting true stories about people who survived against all odds and the lessons for us all, will be available on October 15.

Written by Michael Dickson, executive director of StandWithUs Israel and Dr. Naomi L. Baum, a pioneering psychologist in the field of resilience research and treatment, the book profiles a diverse group of compelling Israeli personalities and traces the characteristic of resilience that unites them all. From well-known leaders making life-and-death decisions to ordinary people who have overcome incredible loss to do inspirational things, meet the Israelis who thrive against all odds and learn how you can too. ISRESILIENCE is a study of a nation that has had to collectively and individually hang tough like no other country on earth. Imbued in Israel’s DNA is the understanding that survival isn’t optional – it’s a necessity. And they don’t just survive – they thrive.

ISRESILIENCE brings today’s most in-demand skill to life and shows how we all can benefit from the trait embodied by the nation once admired by Princess Diana as “a plucky little country.”

Each of the 14 profiles is set against the backdrop of Israel’s history – past and present – and social and cultural systems. Dickson and Baum traveled throughout Israel to interview a wide range of people from multiple backgrounds.

Published by Gefen Publishing House, LTD, advance copies are available. The book will be released on October 15.

Orders can be placed on Amazon: geni.us/Df2U

For other outlets, bulk orders and interview requests, visit: https://www.isresilience.com/

Michael interviewed Natan Scharansky, Tal Brody and Miri Eisen from the book on StandWithUs.tv on August 23:

Years in the making, Michael Dickson explains that “ISRESILIENCE is a study of a nation that has had to collectively and individually hang tough like no other country on earth. Imbued in Israel’s DNA is the understanding that survival isn’t optional – it’s a necessity. Any Israeli could have given testimony for this book. Israelis routinely carry on with their day-to-day lives not just when things are calm and peaceful but when rockets are launched at them, during official conflicts and wars and unofficial waves of gruesome terrorism. And they don’t just survive – they thrive.”

“ISRESILIENCE: What Israelis Can Teach The World” contains absorbing stories of people who:

“This wonderful book profiles inspiring Israelis and their spirit, with a message that will resonate for everyone.” – Senator Joe Lieberman,  former United States Senator and Vice-Presidential candidate

“Michael Dickson, an expert in telling Israel’s story, and Dr. Naomi L Baum have done a great service in sharing the stories and secrets of Israeli resilience with their readers” — Gilad Erdan, Israel’s Ambassador to the United States and United Nations 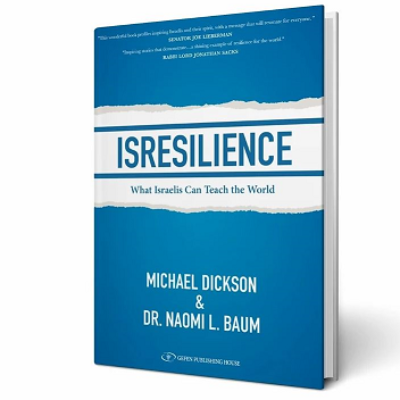 Gefen Publishing House, LTD
Michael Dickson is Executive Director of StandWithUs in Israel, an international educational nonprofit dedicated to supporting Israel and fighting antisemitism around the world. Michael is a Senior Fellow at the Center for International Communication of Bar-Ilan University. In 2016, he was listed as the fourteenth most influential Jew on Twitter. He is the 2019 winner of the Bonei Zion Prize and in 2020, he was listed on the Global Jewish 100. He lives in Israel with his wife and five children. Naomi L. Baum, PhD, consults and facilitates workshops on resilience building in Israel and worldwide. She created the Building Resilience Intervention (BRI), an evidence-based resilience model that has been applied widely in Israel and abroad. She was Director of the Resilience Unit at Metiv – The Israel Psychotrauma Center and co-directed the International Course in Trauma and Resilience in cooperation with the Rothberg School of the Hebrew University. She is the author of several previous books. She lives in Israel with her husband, and is mother of seven, and grandmother of twenty.
Publish your organization's press release on JNS Wire
Releases published on the JNS Wire are communicated and paid for by third parties. Jewish News Syndicate, and any of its distribution partners, take zero responsibility for the accuracy of any content published in any press release. All the statements, opinions, figures in text or multimedia including photos or videos included in each release are presented solely by the sponsoring organization, and in no way reflect the views or recommendation of Jewish News Syndicate or any of its partners. If you believe any of the content in a release published on JNS Wire is offensive or abusive, please report a release.