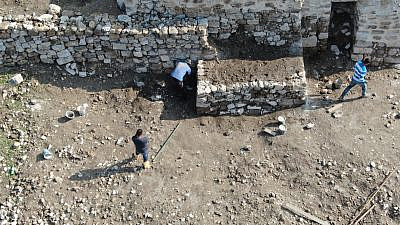 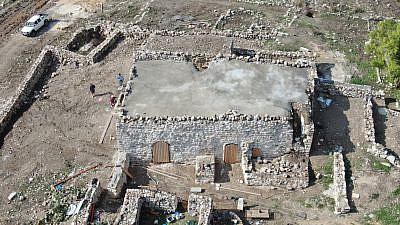 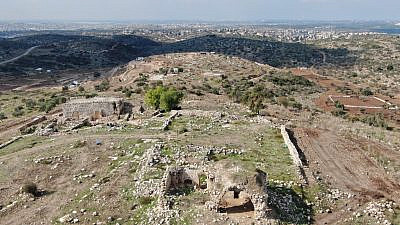 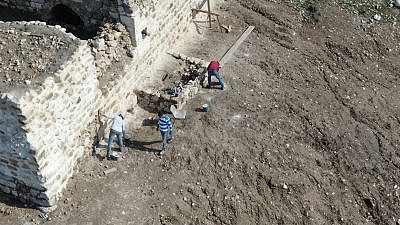 An Arab family invaded an archeological site in northern Samaria and turned it into a private home. Regavim turned to the Civil Administration, demanding the immediate removal of the intruders.
Near Hermesh in northern Samaria lies a registered archeological site called ‘Khirbet Parsin’, which preserves the biblical name ‘Peresh’ (descendants of Menashe) and the Talmudic name ‘Kfar Parshai’.
The remains of a large Iron Age settlement were discovered at this site, including a mikveh (ritual bath), burial caves and complex underground systems from the Second Temple period, as well as impressive buildings from the Ottoman period. Sadly, these important finds have joined the list of antiquities sites suffering from damage and destruction.
About two and a half months ago, an Arab family invaded the site and moved into one of the buildings with his family, carrying out construction work and damaging the ancient finds that bear testimony to thousands of years of history.
The Regavim Movement appealed to the Civil Administration to remove the intruder and stop the illegal work at the site, and were informed that “inspectors have visited the site and served a cease-and -desist order for the destruction of antiquities.”
When the squatters remained at the site and continued to damage it, Regavim again appealed for immediate enforcement. Civil Administration inspectors arrived at the scene and confiscated some of the construction equipment and removed a number of trees that had planted in the area, but did not remove the intruder and his family from the site.
“It is not enough to post an order on the wall and walk away,” says Eitan Melet, Regavim’s Field Coordinator for Judea and Samaria. “Someone needs to insure that the order is actually enforced.” “We welcome the initial enforcement steps that have been taken at the site, but there’s a long way to go on the road to restoring the rule of law and re-establishing deterrence. The squatters must be removed from the compound immediately, and prosecuted to the full extent of the law in order to convey a message to other criminals.”

For more details on this case or other instances of archaeological destruction Regavim is pursuing in Israeli courts, contact Naomi Kahn, Director – International Division, Regavim

Photo credits:  Regavim
Republish this article
About The Publishers

Regavim
Regavim is an Israeli movement dedicated to the preservation of Israel's resources.
Publish your organization's press release on JNS Wire
Releases published on the JNS Wire are communicated and paid for by third parties. Jewish News Syndicate, and any of its distribution partners, take zero responsibility for the accuracy of any content published in any press release. All the statements, opinions, figures in text or multimedia including photos or videos included in each release are presented solely by the sponsoring organization, and in no way reflect the views or recommendation of Jewish News Syndicate or any of its partners. If you believe any of the content in a release published on JNS Wire is offensive or abusive, please report a release.