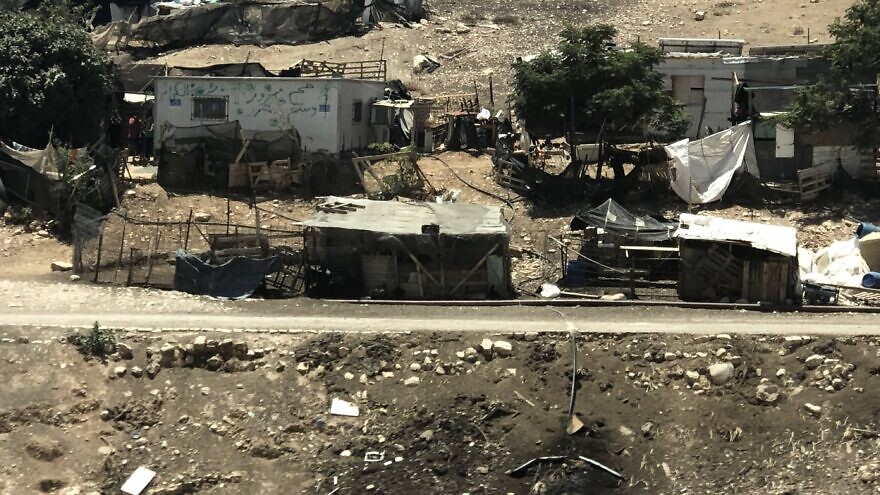 Bedouin outposts in the E1 area. Logos for the European Union can be seen on the buildings. Photo by Eliana Rudee.
Spread the word.
Help JNS grow!
Share now:

“[W]e learned of an official policy document of the European Union, a document the gravity of which cannot be overstated, one that leaves no room for doubt as to the one-sidedness and animosity of the E.U. towards the State of Israel and the Jewish people,” the Knesset members wrote.

“The document completely ignores our people’s historical affinity to our homeland, completely ignores the political agreements and the status of the State of Israel in Area C and seeks to establish the 1949 borders as Israel’s final-status permanent borders—in complete disregard of the Jewish communities in the area,” the letter continued.

The confidential document composed by the European Union’s mission in eastern Jerusalem and obtained by JNS shows that Brussels is actively working with and on behalf of the Palestinian Authority to take over Area C of Judea and Samaria, with the overall objective of integrating the region with Areas A and B.

The document was likely written in June but only came to light this week.

“This singular call has but one goal: to subvert the deep and indestructible bond between the Jewish people and its country and homeland.”

They continued: “You will never be able to change one simple fact: The stones of Judea and Samaria—the stones of Jerusalem—speak our ancient language; and as one of our great poets, Natan Alterman, wrote: ‘No nation turns its back on its own heritage,’

“Your efforts to expedite the Palestinian Authority’s seizure of Area C, while trampling underfoot the universal principles of environmental protection and preservation of archaeological sites, constitute an extremely grave breach of the relationship between Israel and the European Union, causing irreplaceable damage to natural and archaeological treasures throughout Judea and Samaria,” the lawmakers said.

“We were apparently mistaken in thinking that racist, religious hatred of Jews and Israel was a thing of the past. It saddens us to discover time and time again that under the thin veneer of the E.U.’s civility and manners and the seeming concern for human rights, the same old blood libels can be found, along with the same flames of primitive hatred that seek this time to persecute—not the individual Jew, but the tiny Jewish state,” the Knesset members wrote.

The letter concludes by calling on the E.U. to halt all illegal construction in sovereign Israeli territory, especially Area C; halt the damage done by E.U.-funded illegal activity to heritage sites and nature in Judea and Samaria; desist from funding delegitimization groups that promote antisemitism against the State of Israel; and cease funding Israeli organizations that promote E.U. foreign policy interests.