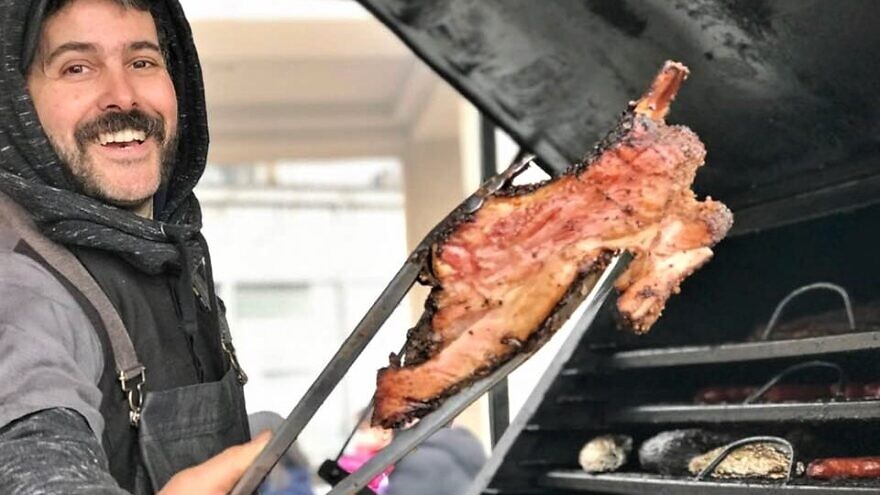 (June 22, 2022 / JNS) Imagine a spread of savory cholent, brisket, herring and whisky from more than 10 countries … not on a holiday or even Shabbat.

“Kiddushfest 2022: Worlds of Whisky, Brew and Que” will take place on June 30 at Hudson Yards Synagogue’s Zanger Hall in Manhattan with some 350 people expected to sample fine kosher delicacies. The event had been on hiatus due to COVID-19 restrictions.

Organizer Ari White, the founder of the Wandering Que, who competed and won the award “Brisket King of New York” in 2016, insisted that this will be the largest kosher whiskey gathering in New York City.

White will sell his smoked meat this Sunday on New York’s Upper West Side at West 86th Street and Amsterdam Avenue as part of a street fair, as well as at Kiddushfest, where cholent, charcuterie and many other items will also be served.

This event will raise money for Tikvah Children’s Home, a Jewish orphanage in Ukraine. He said their efforts were difficult even before the Russian onslaught on the country and that those now helping to smuggle children to bordering countries should be considered heroes. 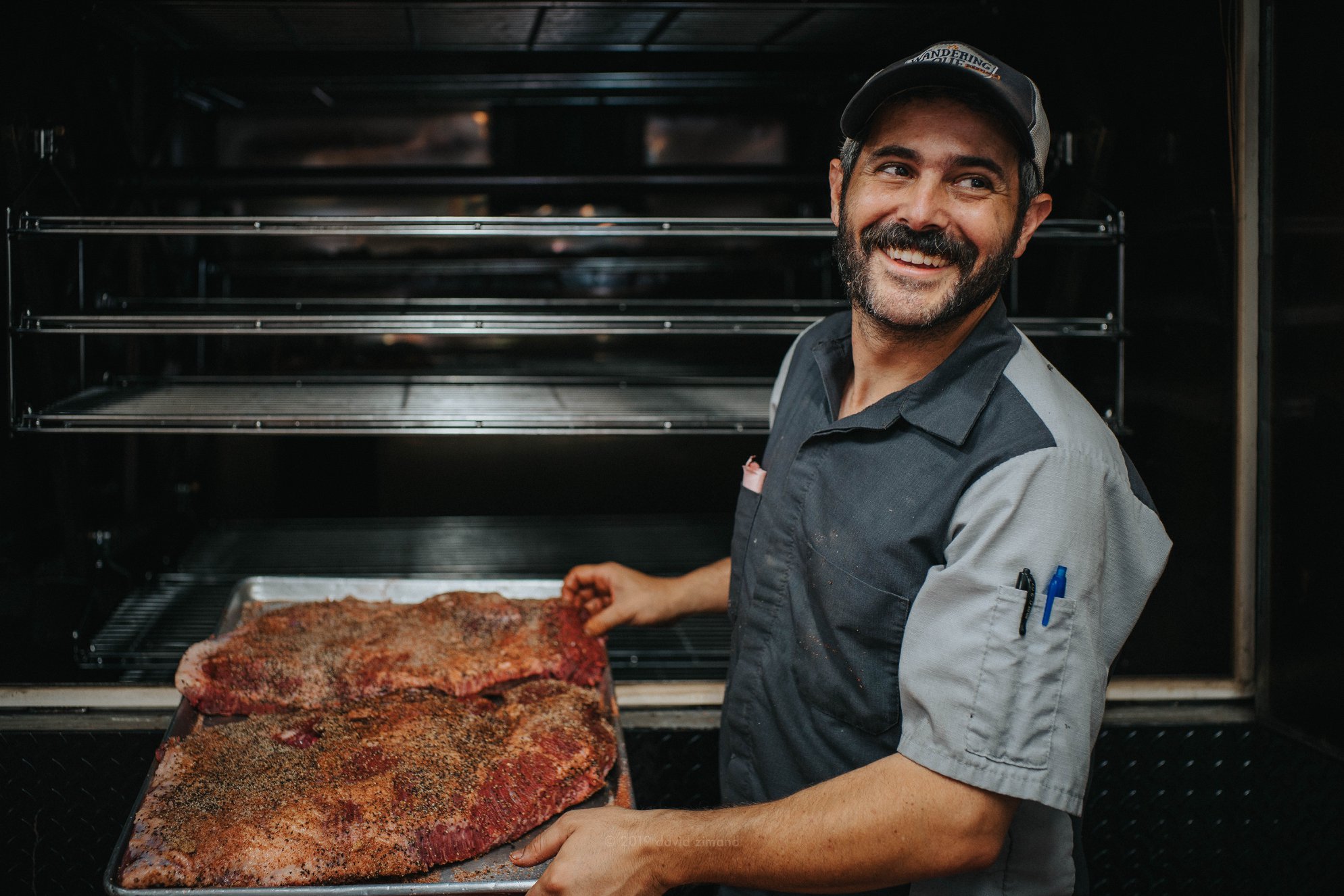 White is known for his award-winning brisket. Photo by David Zimand.

“More than 350 different bottles of whiskey will be poured,” said White, adding that 50 different distilleries are represented aged of different years from such countries as Israel.

“It’s a full Shabbos offering,” he said, noting that he will make Cowboy Gribenes-Fired Chicken Skins with a sugar-based Texas rub. “It gets crunchy and crisp and awesome. It’s effectively a four- or five-hour all-you-can-eat (and drink). And I make my own kishke [stuffed derma].”

Is this the kind of kiddush one can expect to find in heaven?

“I hope to not find out anytime soon,” quipped White.

He said he could have had 450 people but will cap attendance at 350 so the crowd is more spaced out. (White’s award-winning fare regularly draws huge lines on New York City streets.) He also mentioned that while people eat and drink responsibly, members of Hatzalah, the Jewish ambulance service, will be on hand for emergencies.

“The bucket is your best friend at this sort of thing—that, you can quote me on,” said White. 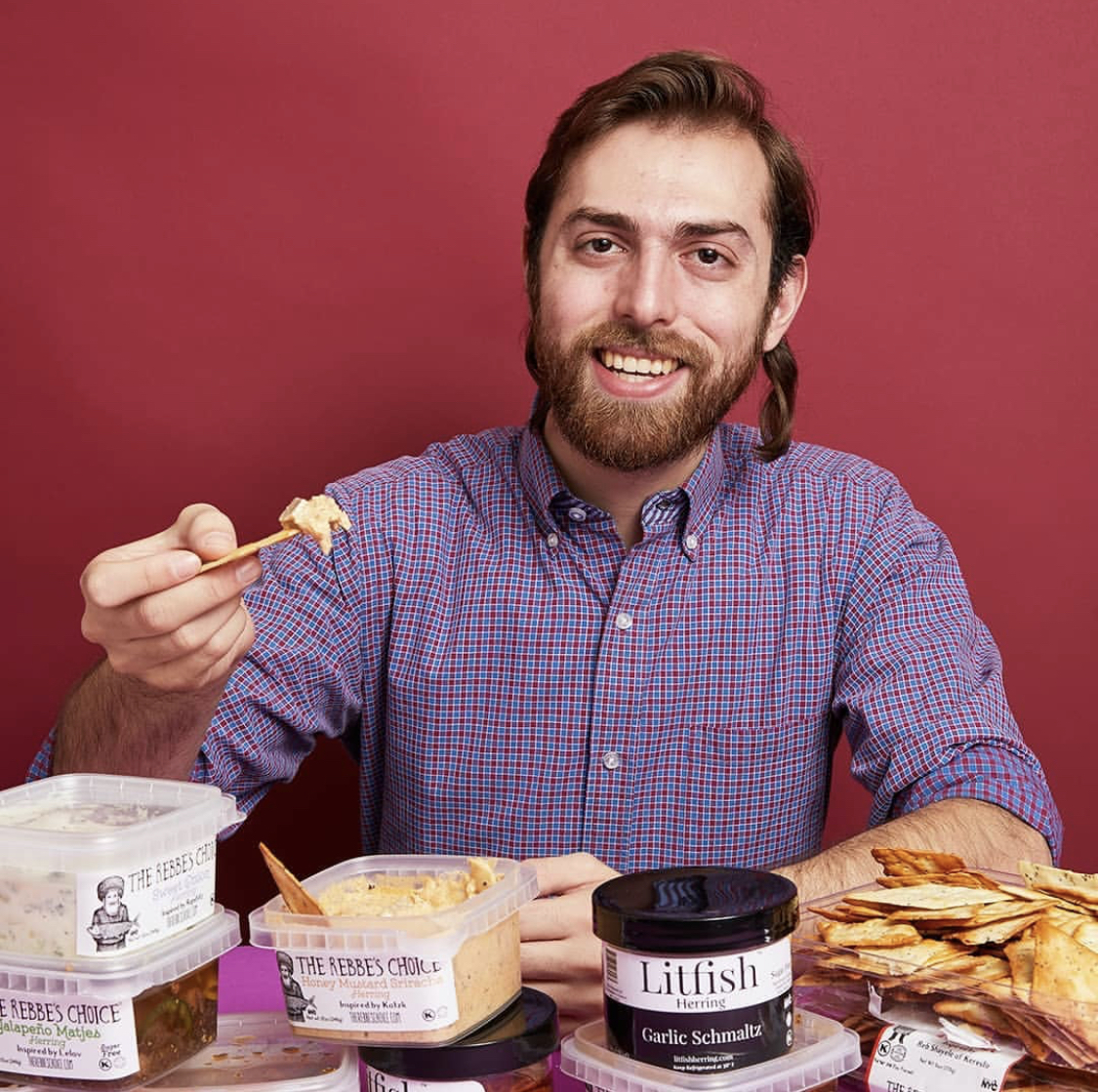 The Rebbe’s Choice founder Naftali Engel says he can get anyone to believe in his herring. Photo by Schneur Menaker.

‘Our herring is different’

While most bar and bat mitzvahs have make-your-own sundae stations, Kiddushfest might be the only time to see a herring station where tasters can sample sauces. Naftali Engel, the founder of The Rebbe’s Choice, said offerings will include Blueberry-Bourbon Coulis, Truffle Oil, Japanese Fusion, Classic, Scandinavian Matjes and Dill Honey Mustard. He said he challenges anyone who is not a herring fan, or who may be intimidated by the pungency or texture, to try his brand.

“Our herring is different,” said Engel. “You’ve got to try it.”

Engel said he started the business six years ago because when he was at Yeshivat Ohr Yerushalayim in Israel, and couldn’t find any good herring. He was introduced to an expert herring-maker in Tzfat and learned some tricks. Their slogan is “Heimish Meets High End.”

“Earthy herring goes good with whiskey, and the spicier ones are better with vodka,” he said.

No kidding, but the phone number of the business is (516) HERRING.

Remember: The diet starts on June 31.

For ticket prices and more information, go to: www.kiddushfest.com.