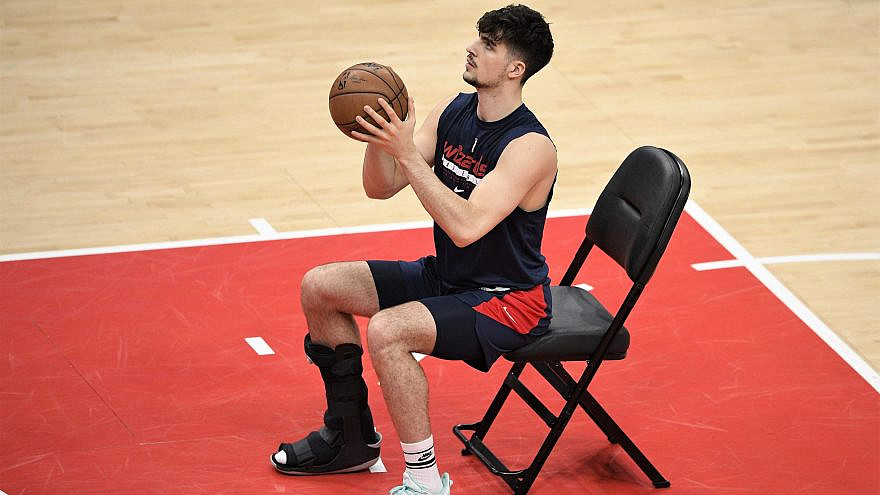 Washington Wizards player Deni Avdija recovering from an injury at the end of a basketball season that saw the team make the playoffs, losing to the Philadelphia 76ers on June 2, 2021. Credit: AP Photo/Nick Wass, Courtesy of the Washington Wizards/NBA.
Republish this article
865 WORDS
Spread the word.
Help JNS grow!
Share now:

(June 4, 2021 / JNS) A little more than six months ago, Israel and the basketball world had high hopes for 19-year-old Deni Avdija. The 6-foot-9-inch former Maccabi Tel Aviv small forward was No. 9 in the first round of November’s NBA draft by the Washington Wizards. He hit the ground running. He endured strict NBA coronavirus restriction protocols, a grueling travel schedule and being far from family, friends and country.

Avdija got off to a fast, fairly successful start. The young rookies started in 15 games, averaged 6.3 points, 4.9 rebounds and 1.2 assists in the 54 games he played this season.

Almost five months to the day of his draft date—April 21—Avdija’s promising rookie season came to an abrupt end. He landed awkwardly on his right leg in a game against the Golden State Warriors on April 21. Avdija left the court in a wheelchair and was diagnosed with a right fibular hairline fracture.

While expected to make a full recovery following a 12-week rehabilitation process, he was deemed out for the season and would miss the team’s unexpected entry in the playoffs. Avdija has been seen from time to time in a walking boot. He was also observed putting up some shots in a seated position prior to the Wizards facing the Boston Celtics in the NBA play-in tournament. But he has not spoken to the media, and the Wizards haven’t shared much on his progress.

That changed on June 3.

Following the Wizards being eliminated in five playoff games by the No. 1 seeded Philadelphia 76ers, Wizards team general manager Tommy Sheppard and coach Scott Brooks spoke with the media for nearly 90 minutes. This final media session of the season addressed the season as a whole; star players Bradley Beal and Russell Westbrook; their young players and frequently injured players; and the future of Brooks whose five-year contract is about to expire. They also spoke about Avdija.

Early in the press conference, Sheppard reported, “Deni is in week six of an injury. I think he will be cleared after 12 weeks. The most important thing to me is his therapy. He was with us on this last road trip; I watched his therapy, I watched him out on the floor. I am pleased with his progress. Our hope is to have him 100 percent healthy by the time summer league rolls around, but it is not imperative that he play in summer league. We’ll make that evaluation at the right time.”

He noted that Avdija missed the last 18 games of the season and was not able to join in the team’s short-lived playoff run.

‘We have a lot of hope in his future’

Brooks has been supportive of his young Israeli player throughout the season and has high hopes for him. He has also offered a realistic assessment of Deni after each game. “I like his potential. He played a good number of minutes this year,” he said.

“There were some really good moments and some when you could really tell he was 19 [he turned 20 during the season]. But we have a lot of hope in his future,” said Brooks. “It is unfortunate he got injured and is going to miss 10 to 12 weeks, and a chance to be in the playoffs. He is a big body. He is a pretty good athlete. He shows toughness. He is a good rebounder, and his shooting is developing itself.”

Brooks said he has enjoyed watching his star players Bradley Beal and Russell Westbrook take Avdija and other rookies under their wing. “They like these young players,” he noted, and have served as mentors to Avdija and others.

Sheppard reported that “Deni is doing fine. He is out of the boot and able to do spot shooting.” He added that the team is having him avoid jumping during workouts to help assure a complete recovery and that he is also working on his cardio, which can be difficult while recovering from a lower-body injury.

Other than that, “he is doing fantastic,” reassured Sheppard. “I think Deni is on track to be an impact player in the future.”

It was an up and down season for the Wizards. They started 0-5, and along the way, dealt with COVID-19, had several weeks without games or practices and went on to 17-32 record. Avdija was one of several players to face injuries.

The Wizards battled back down the stretch and finished with the eighth-best record in the Eastern Conference. They earned a play-in berth and then qualified for the playoffs. After going down 3-0 in the playoffs with the Sixers, the Wizards won game four with an exceptional 122-114 win. The Wizards’ season came to an end with a 129-112 loss to the Sixers on Wednesday night.

Avdija and his teammates will benefit from the much-needed rest, say the coach and manager. Added Sheppard: “Our goal is to have Deni at training camp and have him a big piece of what we are doing.”